Pt. 1 of our adventures on Mackinac Island can be found at this post here.

After lunch, we decided to drop by what is perhaps Mackinac's most famous landmark. The Grand Hotel, constructed in 1887, is a grandiose structure in numerous ways, built originally by railroad and steamship companies to create an ultimate destination for that era's traveler.


Throughout the years, it has remained such a destination for many of the island's visitors. Its depiction in movies such as the Christopher Reeve/Jane Seymour romantic vehicle Somewhere In Time has helped spread its reputation around the world.

On my past visit to the island nearly two decades ago, the fee charged to non-guests ($5 at the time) was collected at the front entrance and gained them limited access to the hotel's interior. Since then, the non-guest fee has gone to twice as much ($10; not too surprising) and is now required to go past the property's periphery. There's no denying the hotel's grandiose nature, showy interior decor and the idyllic image of privilege it puts forth to the public. For the non-guest, payment of the $10 fee is really going to depend on individual tastes and personal itineraries; we decided that on this day that we had other places that were higher on our priority scale and opted not to venture further.

From there, we traveled on foot to two of Mackinac's geological features. Skull Cave has an intriguing name and a couple of interesting stories attached to it (basically, the cave was used as a "storage" place for human remains; also, fur trader Alexander Henry hid here when Fort Michilimackinac on the mainland was overtaken by Native Americans during Pontiac's War.) However, it really is not much to look at from the outside, and there is no access to the interior.

More picturesque and worth the journey across the island is Arch Rock. Held as a place of reverence and fear by Native American peoples, this formation is uncommon in two aspects: a natural arch is something of a geological rarity east of the Mississippi River and consists of an uncommon material (Breccia limestone.) Bicycle riders on the island can double their pleasure with Arch Rock by grabbing a glance upward from lake level from the road below, and then circling back to get the close up view. Those on foot down at the bottom can also opt for a bit of a physical challenge by taking a staircase up to the top.

We rambled back down on something of a side trail to visit Marquette Park, basically the landscaped grassy area in front of Fort Mackinac. Other than providing a place for island-goers to sit back and relax or have a picnic, the main attractions are a bark chapel, meant to replicate a structure the original Jesuit missionaries would've constructed to hold their services, and the statue dedicated to the most influential of this area's missionaries, Father Jacques Marquette. 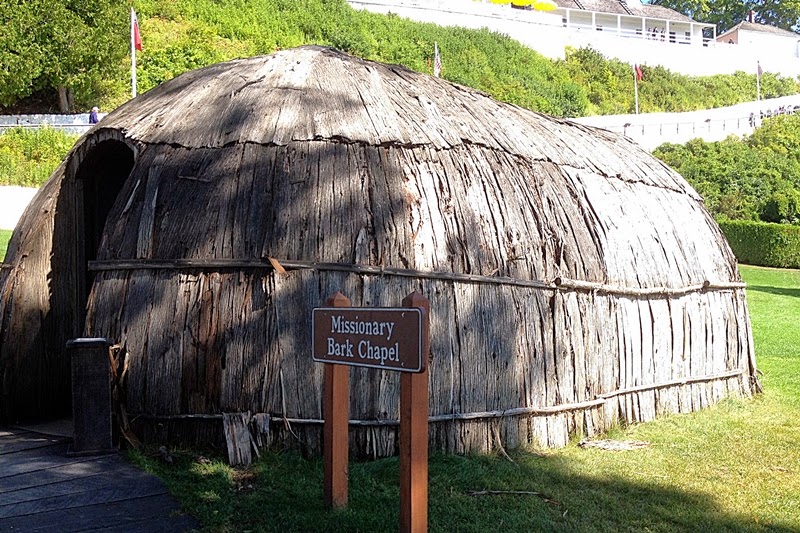 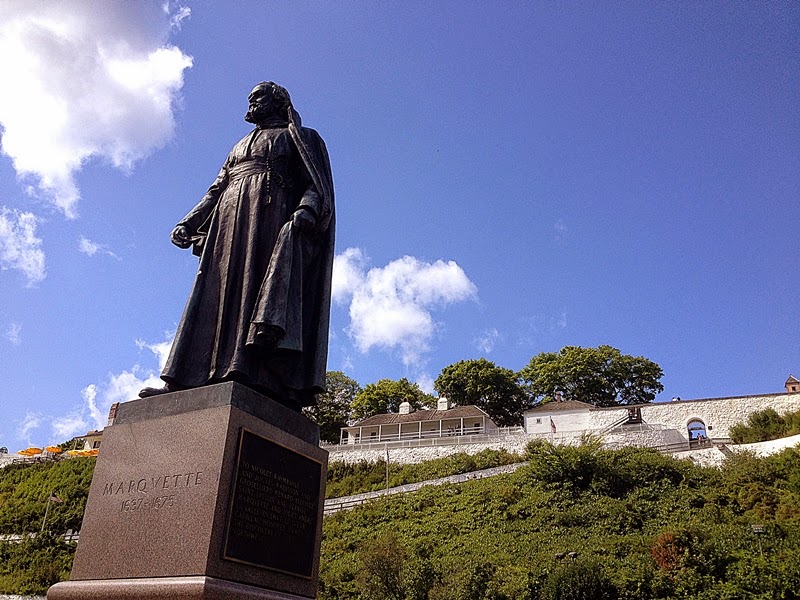 One of the best things about the ticket to Fort Mackinac is it allows you to access more living history displays located in downtown-area buildings run by the Michigan State Park. These displays include the medical breakthroughs made via research of a Fort Mackinac-based soldier whose abdominal wound did not heal property, as well as cooking and blacksmith demonstrations. 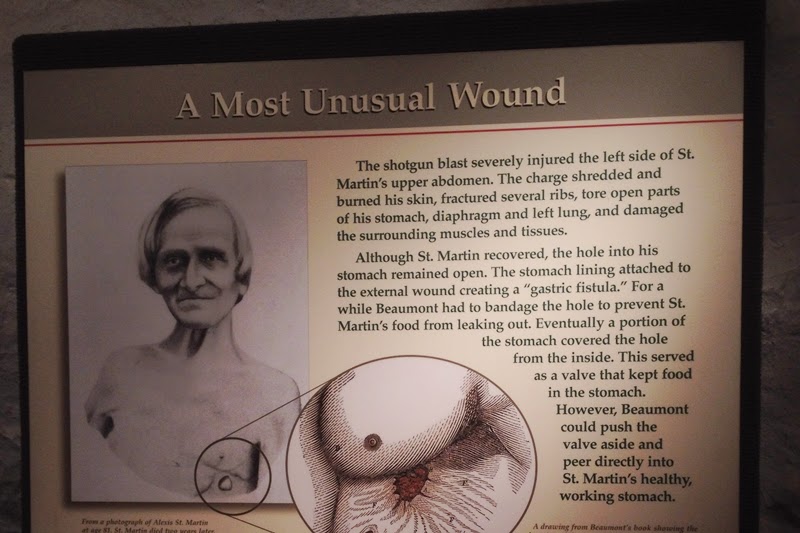 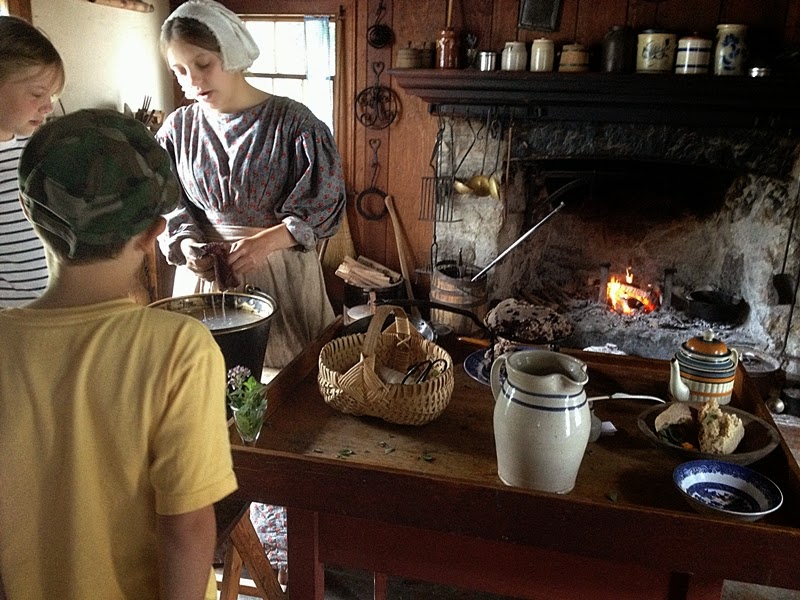 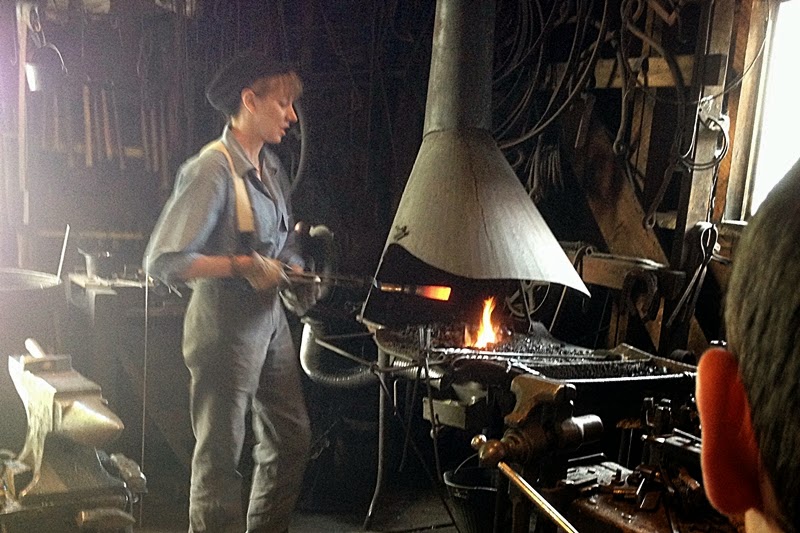 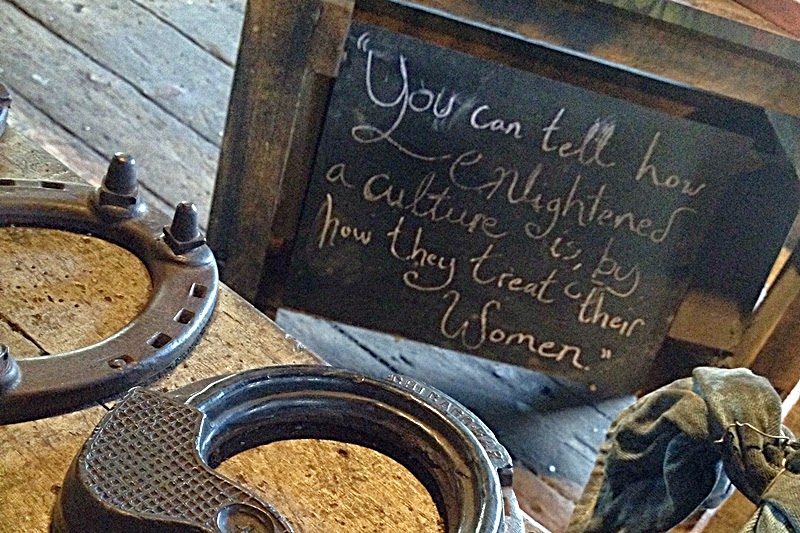 Our time on the island was closed out with stops at two island eateries. Lucky Bean Coffeehouse is one of a few places where one could grab a cup of coffee on the go, but is slightly off the beaten path, as it lies a street behind the main drag of downtown. The interior had a bit of a friendly, California Bay Area vibe (I even noticed a staff member with a shirt referencing Walnut Creek, CA); the iced tea and coffee my spouse and I picked up were definitely a step up from the typical renditions put out from its more well-known neighboring competitor (that begins and starts with a letter "S") located on Main Street. 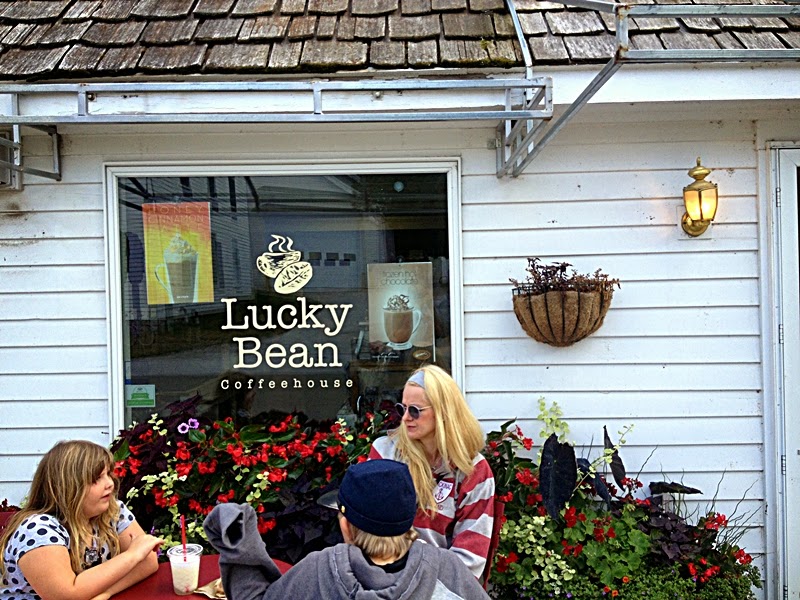 Also, we stopped to pick up a little bit of fudge from The Original Murdick's Fudge Shop. My spouse and I are not huge fudge eaters, but we figured we couldn't NOT get some of this sweet treat. They did not have the live demonstration of the fudge making process actively going on when we arrived, but otherwise they had all the requisite decadent-sounding flavors. Our server seemed a little bit grumpy, but we did get our chunks of chocolate pecan and chocolate sweet black cherry, which tasted just fine and were consumed slowly over the next week.

Finally, we caught our ferry back to the mainland and purposely picked the Star Line Ferry that went underneath the Mackinac Bridge. Windy conditions had prevailed over the lake waters all day long, which made for a very wet ride for those riding on the exposed top portion of the ferry. A few folks were scared inside after the first few waves crashed over top, but for us it was an exhilarating time. The calm of coasting underneath the Mighty Mac allowed us to catch our breath and take in what had been a good day out on the island.

2019 Update: links have been checked and updated as needed