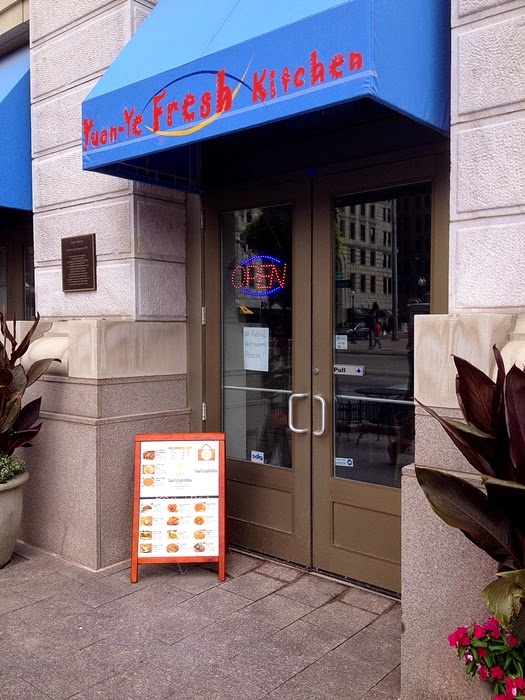 One of the things I personally miss as a close-to-work lunch option is a Chinese restaurant. Back in San Francisco, I had several options, but the cuisine just isn't as prevalent here in general, and definitely not so in the downtown area.

That's why I was personally excited by the signs touting the opening of Yuan-Ye Fresh Kitchen at the old Maki Go sushi location near the corner of Broad and High. Also, food items on the initial menus looked quite intriguing, containing things that I had never really seen on the typical American-Chinese menu Also, the mention of steamed buns, crepes and other items for breakfast you don't find in the downtown area put this place on my must-visit list.

Based on these first visits, the family-run Yuan-Ye has work to do and is learning on the job. For example, the table layout was setup in a way that blocked customer flow in and out of their space and lent the impression that they were still in the process of moving in (they have fixed this quirk recently.) Also, there's not much advertising the restaurant's opening other than sandwich board signs outside their store and a newly installed but somewhat hard-to-read awning.

Customer service is similar: the owners are earnest in their attempts to provide good service but it remains disheveled at times, Unlike many takeout joints, Yuan-Ye does not have steam table setup at the front counter; menu items are mostly brought back from the back kitchen, save for items displayed in the heat lamp display case. Truthfully, this case probably isn't the best way to show items like their chicken legs or their Ye-Ye fish, nor does it lend a notion of freshness as referenced in their restaurant name.

Regardless, I'm game to try most anything, and what I've tried so far has been a mixed bag. The most winning item so far has been their minced pork steamed buns (2 for $2.99) they serve for breakfast. The pork filling was moist and had a pleasant savory taste, with hints of ginger and a thirteen-spice (I had only heard of five-spice before) blend. These buns also passed my freeze test: as I grew up as a child, my parents would occasionally make huge quantities of their delicious siopao, a Filipino steamed bun. This siopao eminently freezes well after their initial steam cooking, and these buns were similar in nature when I brought some extras home for future consumption.

Their pork potato noodles ($6.45) were unlike any noodle dish I've ordered before and didn't look like much at first glance. Consisting of cubes of what seemed to be ham and potatoes within a mass of noodles and greens, this dish actually proved to be fairly tasty.

Their Chinese crepe ($3.99) probably is a jian bing (煎饼), but it is missing a crunch aspect typically found inside this street food item. Regardless, it is emblematic of the mixed-bag you get here. On the plus side, the crepe itself was freshly made at the front counter, was cooked well, and tasted just fine. The egg they placed on top of the batter was a nice touch that is typical of this creation.

On the minus side, the turkey they used within was supermarket level (think Oscar Meyer) and the paste they used to brush the crepe (reminiscent of soy sauce) was unevenly salty, making some bites of the crepe unpleasant due to the sheer saltiness.

Despite the heat lamp treatment, the Ye-Ye fish ($4.99) was a decent tasting filet with a predominant cumin flavor.

Yuan-Ye has some unique items to offer and adds some diversity to the downtown dining scene, but overall they are still a work in progress. The uniqueness of these items also may be an issue as they may not be enough to bring in less adventurous eaters (they have added a Pad Thai dish recently.) The speed of their service may also need to be improved to satisfy the eat-and-run downtown crowd. Improving their overall consistency and service should be the first thing on their docket to ensure their stay in the area is not a short one.

(09/03/2014 Update: Alas, this last sentence might have been prescient; a large "Closed" sign has been on the door the past two days, and there's no indication that they'll be reopening in the future.)