Sandwiches Around The Statehouse: The Carvery 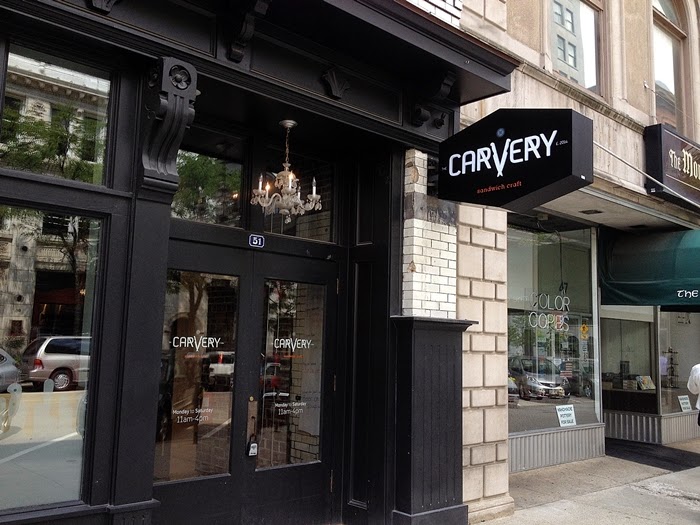 The Carvery, the latest restaurant addition to the bustling Gay Street District, brings a gourmet touch into the crowded downtown sandwich scene. Their base menu centers on five sandwiches, anchored by their signature Porchetta, plus two special-of-the-day offerings (one meat- and one veggie-based), all served on their house-baked bread rolls. In fact, pretty much everything from their meats to their salad dressings are prepared from scratch and in-house.

I had prior sampling of their signature roast porchetta (quite good indeed) at a couple of Moonlight Markets held earlier this year, so I focused in on some of their other offerings on my first visits. Out of these, their roast turkey is my favorite so far: a dry-brine process leaves their turkey quite tender. Supplemented by two slices of their house-cured bacon with lettuce and tomato, it makes for a satisfying lunch. The meatball sandwich was also solid, with a slightly crumbly but tender mix of prosciutto, pork and beef, enveloped in a tomato sauce that played a middle ground between sweet and spicy.

Particularly popular sandwiches can be sold out for later arrivals (their special roast beef sandwich disappeared from the menu before I reached the cash register on one day), but The Carvery offers call-in service for those who don't want to miss out on a particular daily offering.

A salad option ($6; $2 with an additional protein) is available, along with various sides ($2 - $3) such as pasta salads, slaw and soup. It's hard to imagine anyone but the biggest eaters not feeling stuffed with a side and sandwich combo. Variations on sides tend to change with the day; a standard slaw (pleasant enough, with crisp veggie shards and a not-too creamy base) one day was a spicy poblano slaw (something that sounds more to my particular tastes) on another visit. On another visit, I had a roasted potato side that, while a touch oily, had a nice herb-filled flavor.

They also have a collection of baked goods (typically $1 to $3) at the front consisting of essentially whatever strikes the fancy of the staff that particular day. Their Coconut Surprise cookie was a tasty variation on the Girl Scouts' Samoa/Caramel Delite cookie. Also, those seeking a loaf of bread to take home have extra incentive to grab one from here based on what seem to be some really nice prices

The restaurant did a nice job of creating a fashionable interior, and putting in more seating than one might think would fit comfortably within this generally narrow space. However, their current setup has people backing onto the sidewalk during busy times; this isn't much of an issue in warmer weather, but may need to be looked at when the weather trends to the colder months.

Based on these first visits, The Carvery has sliced out its own distinct sector on the world of downtown sandwich purveyors by focusing on a select collection of quality-laden offerings and supplemental items. You may spend a bit more here than at most neighboring eateries, but you will be rewarded with fare that is a notch above the usual.

2019 Update: The Carvery closed for business in December 2017 due to a building plumbing issue. The owners of Lynn Alley's Si Senor have since taken over the space in October 2018 with their Peruvian fast-casual concept Criollo.