02/06/2019 Update: Pitabilities continues to provide its well-crafted pitas with its food truck fleet throughout the metro.  Aromaku, on the other hand, has undergone a change in ownership. Current social media links have not been active since December 2017; thus, we have been decommissioned the active links until we hear something further.

I was a big fan of the mobile truck scene in the San Francisco Bay Area during my time out there, and that love has transferred over after my move out here. I have personally have found it fun to seek out and sample this region's offerings, as well as to see Columbus getting some due for this growing scene with the recent debut of Eat Street segments featuring five of this metro's finest.

With food truck activity soon to wind down to more minimal levels with the oncoming seasonal changes, it seemed only appropriate to write about a few of my favorite mobile food vendors. 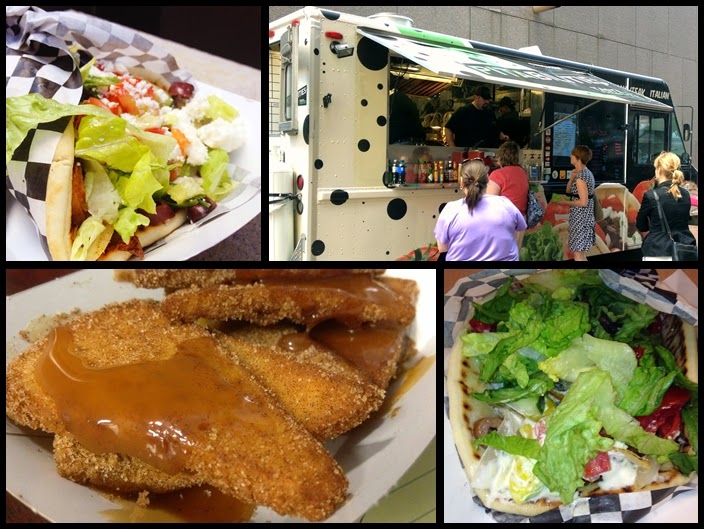 Pitabilities - Pita bread is one of the best multi-dimensional food items in my eyes. It fits well in your hands, it's sturdy enough to handle a variety of sauces, and you can vary the ingredients inside it and come up with a multitude of tastes to please most any palate.  Even the folks here acknowledge this fact; as stated on their menu, their item descriptions are only suggestions and that "the possibilities are endless."

Columbus' Pitabilities cooks up a menu that covers all the bases from relatively healthful (the veggie) to the more decadent (fried chicken tenders), and from the basic (a solid-tasting gyro) to something a little more fancy (their excellent Philly cheeseteak.) Prices for most of their pitas range around the $7 to $8 mark.

Besides pita-style sandwiches, Pitabilities has salads and (naturally) pita chip creations. One such creation, their Cinna Chips, should please about any sweet tooth. Freshly fried pita chips with cinnamon sugar would do the trick for most; throwing in a generous drizzle of your choice of chocolate, raspberry, vanilla or caramel on top takes this simple side over the top.

I've pretty much enjoyed everything I've ordered from Pitabilities. Those who aren't quite sure what they're in the mood for could do a lot worse than stop by this food truck to ponder their menu suggestions...and maybe even a few more possibilities to boot.

Pitabilities
For the latest info on their upcoming locations, please consult the following 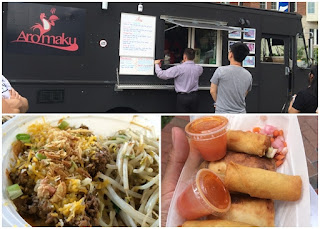 Aromaku - I got my first taste of Indonesian food in that wonderful food melting pot of Malaysia,where you could find at least a decent version of just about any fare imaginable alongside the native checkerboard of Malay, Chinese and Indian-influenced cuisines.

I had kept my eye out for Malay cuisine since my return back to the states, but neither the San Francisco Bay Area nor Columbus (I never did get to try out the now defunct Merlion, unfortunately) had much out there to target for a visit. Thankfully, Aromaku is around to provide a slightly tangential but no less tasty road back to those days.

Generally speaking, Aromaku's standard menu centers on four Indonesian or Indonesian-influenced main items ($7 - $9) with a couple of sides. On our first visit, we ordered and found their signature Rendang (served with either rice or roti prata, a flour-based pancake) a satisfying dish. While the menu showed it bracketed with a hot pepper symbol, this version was more flavorful spicy vs. heat-based spicy. But while the Rendang was good, we found their Ayam Bakar even better. The spicing used took this a notch beyond ordinary grilled chicken, and the meat itself was grilled perfectly, with not a dry piece in the bunch.

We had ordered a side of their veggie rolls (Lumpia Sayur; 3 for $2) on this first visit that were merely okay; a return visit a couple months later had a menu that boasted of a better version. Indeed, this lumpia rendition seemed more like a Filipino version, and a tasting proved their menu claim to be correct, reminding me of some of the delicious versions I ate in my household growing up.

On this second visit, I also went with a Rendang, but with a slight twist. Their menu boasted of a "better than Skyline (Chili)" Rendang Chili, a mixture of their rendang sauce and ground beef served over your choice of tortilla chips, fries or noodles. With the Skyline reference, the choice was obvious: I had to order it with the noodles.

As it turned out, this chili was really the perfect drunk (or keep yourself from getting drunk) food (and yes, that is a compliment.) Whether one finds this unique fusion item better than Skyline Chili's creation is a matter of personal taste, but I found this a scrumptious and tummy-filling complement for any of the beer being served by Zauber Brewing next door.