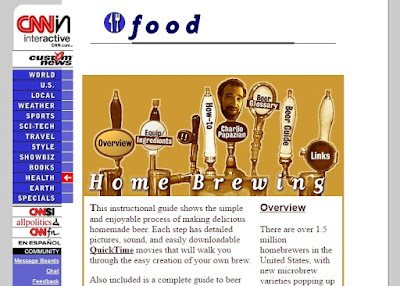 Those who venture to the webpage will probably do a double-take to make sure they're not typing on a Pentium II-powered desktop. Flickering logos entice you to surf the web via Infoseek (now only active in a select few countries these days) and seek out the services of BigYellow (pages? self-storage? taxi?)  Elsewhere, sports-oriented folks may be lured by the site link to visit the burgeoning CNNSI Network, the powerhouse merging of CNN and Sports Illustrated (this entity officially died one year later, a victim to more well-armed sports broadcaster groups such as ESPN and Fox Sports.) As it turns out, pretty much all the outside-of-the-CNN-domain links simply don't work.

However, links to other sites within the CNN.com domain and the Homebrewing section itself tend to be functional more often than not. One working link from the home page is the "Beer Guide", where one gets a gander of upcoming beer-focused events....straight from 1997 (note those wonderful e-mail domains such as primenet.com and the number salad that can only mean a Compuserve account.) 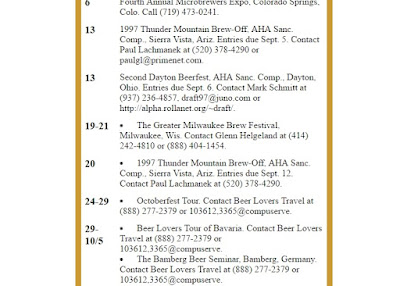 At the related "List of Breweries" link, the selection boxes for state-based listings do not seem to function correctly from the webpage itself. However, it was the magic of Google search for me that initially brought up part of the webpage's Ohio state brewery index.  This particular search included some very familiar names for those in the Columbus area: Scott Francis (longtime Columbus brewing presence and current head brewer for Temperance Row in Westerville), who was then associated with the venerable Barley's Brewing. 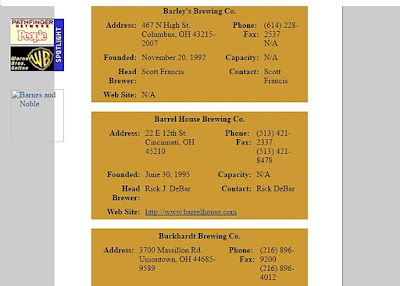 Perhaps the biggest point of interest to most will be CNN's association with craft beer legend Charlie Papazian, author of "The Complete Joy of Home Brewing" and founder of the American Homebrewers Association, which currently boasts 46,000 members. With Papazian's assistance, CNN's website gives homebrewers the terminology and the basics behind brewing your own beer at home. As a bonus, Papazian details the mechanics behind his beer recipe for a Palace Bitter (sadly, the links to the once associated Quicktime videos no longer work.) 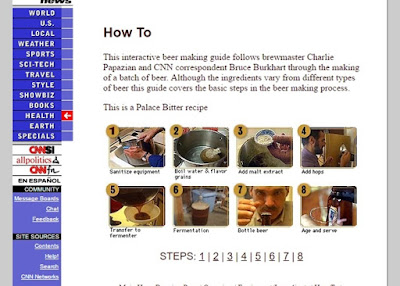 Suffice it to say, this is a fun little find for me, and hopefully those of you who are of a similar vein will find the searching equally as enjoyable.  And besides, who wouldn't want Charlie Papazian telling you to relax and have a homebrew with him?
Posted by Joe