Before I start my catching up posts, it's time to go Tarantino on you all and shift to the present.

This Memorial Day weekend was something of a first for me.  Back in California, Asian-themed festivals were somewhat common throughout the year, and many ethnic groups were well represented enough in the region to have their own annual festivals based on various cultural traditions.  The one closest to my home, the Vallejo Pista Sa Nayon, is centered around Filipino independence from Spain and draws close to 40,000 people in one day.

In Columbus, this mass representation of one single ethnic group doesn't really exist, but there are enough people from the Asian continent living here to make the Asian Festival one of the bigger festivals of the year.  Numerous countries are represented at this gathering, which was celebrating its 20th anniversary at its Franklin Park Conservatory just west of Bexley on Broad Street.

Before we hit the festival, my spouse and I stopped by one of the first places I made a point to visit after arriving here in Columbus.  The Olde Towne East neighborhood has been the focus for redevelopment efforts, and The Angry Baker had just established foothold in the community during my first visit in 2012.  I had grabbed only a scone and coffee back then, but was always interested in coming back to see how they evolved.

On this return visit, the space looked a bit more spiffy, but more or less maintained the old brick house, home interior that I had encountered during my first visit.  Behind the glass panes, lots of awfully tasty-looking morsels greeted our eyes and the employees stood plying their baking craft. 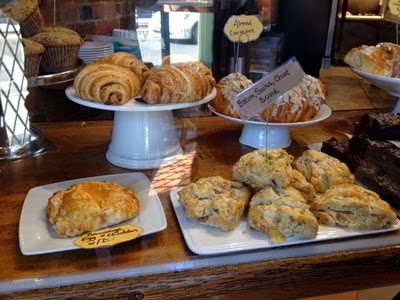 Like my first visit we were here to grab a quick bite, so the more hearty additions to the menu that they listed on their chalkboard such as the French Toast Sandwich would have to wait for another visit.  But our selections (the ham, swiss and dijon kolache, and the vegan bourbon-peach donut - we split our selections, as is tradition) along with their coffee from Cafe Brioso provided a tasty start to the day.

From there, we proceeded down to the Asian Festival.  We would only have a couple hours to spend here as we had travels up to northwest Ohio to visit relatives planned, so we wanted to pack as much bang we could in that short time period.

We first wandered over to the food court to see what we might want for lunch.  Along with the festival-specific vendors, a few of the notable Columbus Asian restaurants were represented, including San-Su (Korean), Siem Riep (Cambodian) and Yaourt (excellent frozen yogurt based in Dublin.)  While watching some of the performances, we snacked on a papaya salad from the booth for Erawan Thai, a restaurant located in southeast Columbus.  The salad, packed in ice, had that right combo of tang, spiciness and fishy flavor to satisfy on what was quickly becoming a very warm day. 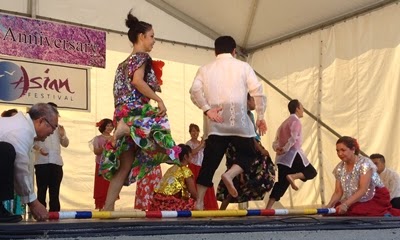 There aren't too many Filipinos in Central Ohio (according to one of the festival's exhibits, about 2,500 were calculated in the census year 2010), but I was lucky to catch a performance from a Filipino dance group based out of Dayton.  The Pamana Dance Group gave a very spirited performance of Philippine traditional folk dances, including the Tinikling, a favorite of mine.  Here, two people pound and slide bamboo poles in rhythm while the dancers step and whirl about in and out of the space created from the pole movements.  Considering they had only 20 minutes to perform, leaving little to breaks between the four dances, the group did a fine job.

Eventually, lunch time came around.  Both of us were not terribly hungry still between the pastries at the Angry Baker plus the papaya salad, so we decided to grab some snacks from one of the fair-centric vendors (in this case, an Ohio-based Filipino organization.)  With the hot day, we decided halo halo (Tagalog for "mix-mix"), a Filipino shaved ice dessert made of evaporated milk and an assortment of tropical-based fruits, and a couple of lumpia, essentially the Filipino edition of the egg roll, would do the trick. 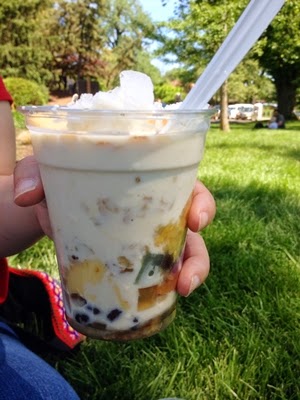 Both of the varieties of lumpia we sampled (veggie and pork) had very minor issues - the pork was a little bit salty, and the veggie could've used a little more filling - but all in all they were good.  The rendition of halo-halo was heavy on the nata de coco (three different colors of what is essentially coconut water gel cubes), with sweetened kidney beans, ube (purple yam), strips of langka fruit and plantains, and a dash of pinipig (pounded toasted rice kernels.)
The one big thing that seemed to be missing - something of a cardinal sin in my book - was the lack of macapuno, or young coconut sport.  This, along with langka, would be the minimum must-haves for any version I made up as a young child.  Still, we were satisfied with what we had, as the money was going to a good cause and shaved ice desserts are hard to be beat on a warm, sunny day.

Two Thousand Miles and Two and a Half Years Later

This blog was nearly started two and one-half years ago.  And truth be told, that would have been too soon.

Previously, my experiences with Central Ohio had been in 3-7 day increments every 6-8 weeks apart starting in the summer of 2010, with a couple of visits before that to participate in running races with some online friends I had met through an online running forum.  Essentially, all my experiences with Ohio had been as a visitor.  My home was in California, as it had been for the 30+ years before.

When I moved out here with my now Mrs. 614orty-Niner end of 2011 from the left coast, I still had the visitor mentality in my mind.  But the reality was, barring something drastic, Central Ohio was going to be my home for the foreseeable future.

At that time, I had played with the idea of a blog, with the general theme of California-raised dude learning about what Ohio had to offer and writing about it as he experienced it.  But when I thought hard about it, I realized I would be writing with the visitor mentality.

I felt I like I needed at least one year to observe my new home, to absorb the new environs, and then process the experience through my mainly California-centric filtered-brain.

Well, it's been more than a year, and now I feel the need to write.  The quick summary is I've enjoyed my time here, and have been really pleased by what Central Ohio has had to offer.

The longer story is to be written in the following blog posts.
Posted by Joe No comments: