For all the hype meat substitute like the Impossible Burger and Beyond Meat have received in the past few years, perhaps the most original of O.G. meat-substitutes, seitan, has been creeping into more menus as well. Essentially wheat gluten, this has been used in Asian countries in cooking for centuries, though the word itself dates back only sixty or so years to Japan, where George Ohsawa coined the term. For many vegans, seitan is a pretty standard staple in their diet.

Also, while it would be easy to pronounce the term like the name of the oft written about Prince of Darkness Satan, most folks I’ve chatted with state that say-TAN or say-TAWN (emphasis on the second syllable) is the accepted pronunciation.

We probably wouldn’t have paid this bit of trivia any mind even a few months ago or so - we had an occasional dabbling here and there, but it never made an impression on us until this year’s trip into Pennsylvania. Our visit to Lawrenceville’s B52 Cafe opened our eyes wide to seitan’s possibilities, with dishes like their tasty Kofta Tofu Scramble and the even better Seitan Shawarma. On this meal, we didn’t miss the traditional meat or pork proteins one bit.

As it turns out, two Columbus culinary entities, one spanking brand new and one well-established, have come out with their own seitan-based items. Would they fulfill our dreams of something just as tasty here as we had that morning in the Steel City?

From Zane's Trace to Outer Space: A Journey into Muskingum County

The long road trip test isn’t always recommended for potential relationship testing, but it will almost always give you a definitive answer about viability of a partnership after a single experience. Our first road trip together covered at least 500 miles over a several day period. Our second trip was even longer, including a 350-mile circuit of Oregon in one day that started and ended in Bend, but in between included an 8-mile hike on Mt Hood, donuts in Portland, and dinner with relatives in Tigard.

An off-the-cuff trip recently into Muskingum County proved to be a fairly short jaunt by those standards, but the sites we visited for the most part were all about the longer journey, including one instance which covered approximately 75,000 miles. 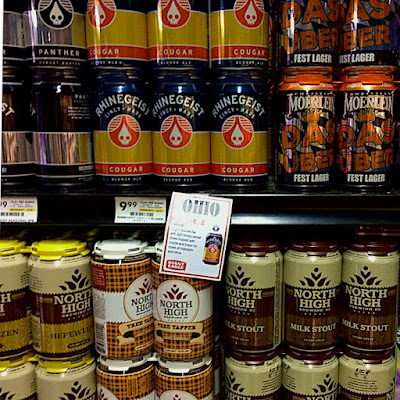 Despite signs of slowing growth, craft breweries are most certainly still a thing. According to an article in USA Today, the craft beer industry surpassed the 7,000 operating breweries by the end of 2018, according to the Brewers Association. Furthermore, the Association expects another thousand or so breweries will join the fray by the end of 2019. And while Ohio may not match the sheer numbers of craft breweries found in other states, they are more than holding their own in volume, ranking fourth in the country according to the Brewers Association.

These sheer numbers have made it more important than ever to tune in to their surrounding community. If you can’t draw the locals in on a regular basis, your chance to achieve that next level of destination brewery pretty much rates as nil.

The Truth is in the Tasting Vol. 2: A Return to Veritas We don’t do fancy meals all that often, so anticipation rises high when we do indulge. Four years ago in 2015, we found ourselves in Delaware, Ohio at Veritas, a place which had been earning "Best Of" kudos throughout the region. We found out the recognition was well earned, and their tasting menu and cocktails provided us with easily one of our top three dining experiences ever.
.
Flash forward to the future: owner Josh Dalton has jumped at the opportunity to move his restaurant to the proverbial heart of it all, relocating to the historic Citizens Building in Downtown Columbus. Not only that, they have emphasized the tasting menu even more, both with their current seasonal tapas selections as well as their Chef’s Table, which leaves it up to the chef and his kitchen staff to wow you with their creativity.
.
The latter option sounded like the perfect way to dive into Veritas the second time around for another special meal.

As mentioned in a previous blog post in the Autumn 2018, I have veered toward notable experiences with the area's food trucks instead of comprehensiveness due to the sheer number of food trucks that roam Central Ohio these days. With that said, two of the three trucks featured here are well-established veterans of the scene which my spouse and I have had the chance to visit numerous times, while the other reflects a culinary trend in the local area that I hope is a continuing one. 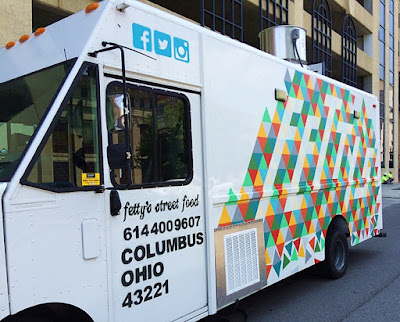 Fetty's Street Food - my spouse's niece, who had spent some time studying in South Africa near Durban earlier this decade, mentioned one her favorite dishes she ate there was something called Bunny Chow. Originating with the Indian population of the area, this popular dish involved a nicely spicy curry poured into a hollowed out portion of a bread loaf.