Goetta Gets You Stuff: Return Travels to Cincy (Pt. 1)

Several months ago, we made a jaunt for the heck of it a couple hours to the south for a quick little weekend in the Cincinnati area. Suffice it to say, we had a pretty lovely time of it, with our first samplings of an area staple Goetta at Goettafest, visits to The Findlay Market and the American Sign Museum, and some Queen City brewery hopping.

We weren't exactly planning on returning this year (as they say, plenty of places to go, so little time), but it turned out (unknowingly) at the time that a friendly little hashtag on one of my social media got the attention of the folks of the Cincinnati Convention and Visitors Bureau, enough so that they picked us for a lovely little travel package back to come back to the Queen City. Suffice it to say, we were very happy to be picked as winners, and we decided the holiday season would be a great time to come back for a quick pre-Christmas vacation. 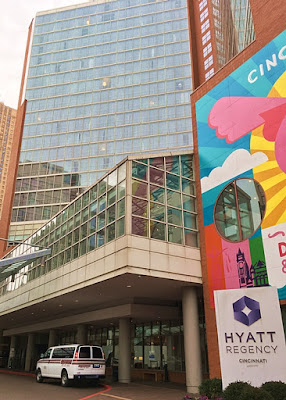 The Hyatt Regency Cincinnati, located smack dab in the middle of downtown, isn't normally the type of hotel we seek out (we're more than happy with a lower frills with a nice comfy bed type lodging.) Still, the prize package included a free night at their hotel (we decided to pay for one more night to make it a full weekend) and it provided us a reminder that, with rare exception, the next hotel tier higher gives you a more refined comfort experience. 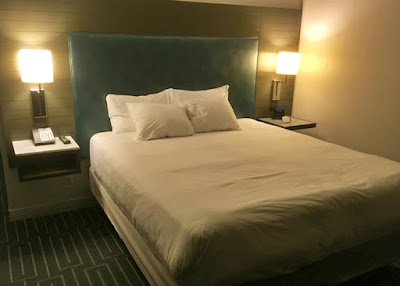 Here, the interior just seems that much more fashionable (the view of downtown and Union Terminal from our room didn't hurt either), everything from the appliances to the plumbing to the light fixtures just function that much better, and the amenities available inside and outside your room, from the fitness room to the swimming pool to the hotel restaurant's tasty buffet breakfast at the Red Roost Tavern, go well beyond what you get at the budget chains. 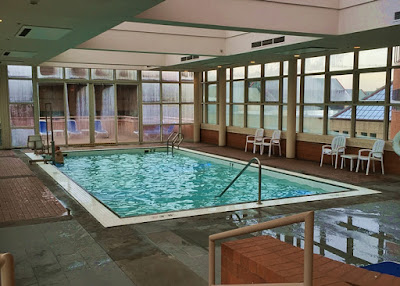 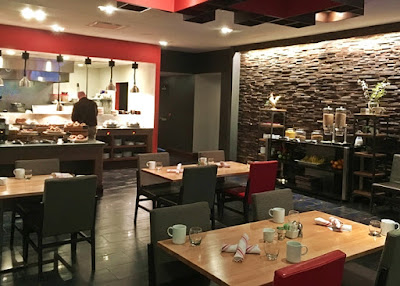 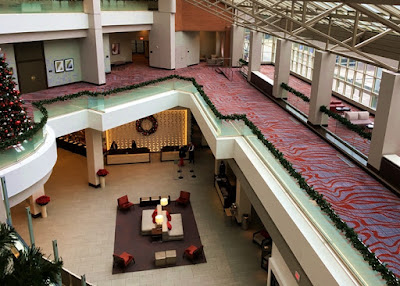 Those factors don't mean much at any hotel if the staff's hospitality was lacking, but that was not an issue during our stay. We were welcomed uniformly, from the housekeeping staff to the valets, from room service personnel to those running the restaurant. While we almost certainly trend toward our more frugal ways during any future travels, the Hyatt impressed us enough to earn our consideration when it comes to staying in the Queen City.

Cincy remains a bit of an under-explored brewery scene for us, but we have made up some fairly substantial ground over the past year and a half. On this trip, we dropped by a couple more new craft beer meccas, including one of the first arrivals on the modern-day Cincinnati brewing scene in Listermann Brewing. 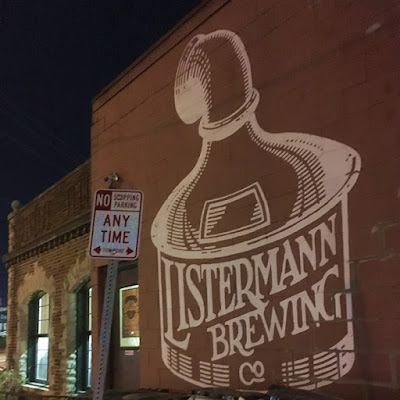 The brewery, located just south of the Xavier University campus, just celebrated its 10th anniversary, but its roots go back much farther when owner Dan Listermann operated a home brewing supply shop in the 1990s (the shop still exists, but takes up far less of a footprint in their current space.) The brewery's use of re-purposed dairy equipment will sound awfully familiar to those who were regular customers of Columbus's now-defunct Four String Brewing. 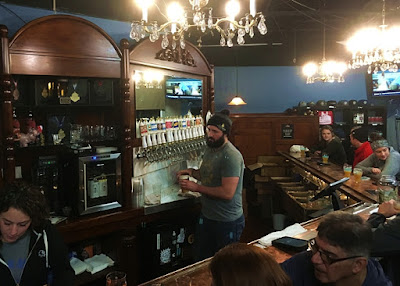 The main brewery space sports two main sections for visitors, with one centered around a large wooden bar and the larger rear area featuring more of a beer garden type setup with community-style benches and tables along with overhead televisions, a shuffleboard game, and a sizable mural along the brick wall.  The primary concrete and brick makeup of this part of the building makes this section of the building a bit loud, but I imagine the numerous garage doors will help alleviate that cacophony on more friendly weather days. 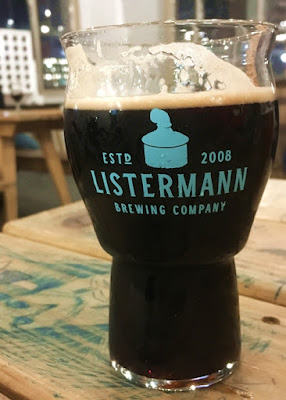 The crowd was just like any good neighborhood brewpub, with plenty of people over to celebrate the end of a work week. Our four beers we sampled ranged from the solid to very good range, with the West Coast-style IPA PAC and the even better Father Kyle's Cinnamon Roll Stout, which pretty much nails that flavor profile with the right amount of sweet. 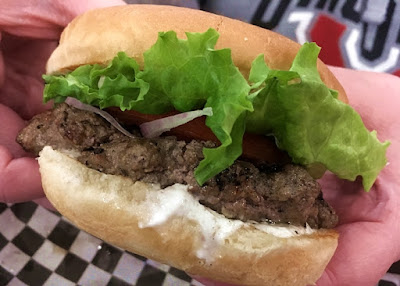 Paired up with some good eats from the in-house Renegade Grille - a Gyro Burger that save for no feta cheese (that would be a lovely addition, by the way) was a perfect flavor match and a good tongue burner in the Garlic Parmesan wings, given a little extra heat via the Brewer Style preparation (something that can be applied to all their wing varieties) - and we had ourselves a brewery that earned an "always a consideration" slot on future Cincy trips. 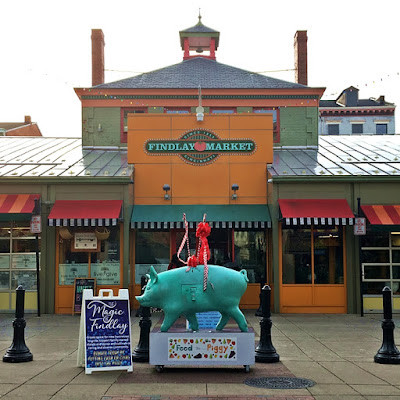 Finally, we decided to stop by a place we enjoyed immensely on our last trip in The Findlay Market. Obviously, the winter has cut down significantly on the outdoor vendors, and the space reserved for the beer garden in warmer months was now a Christmas tree holding pen, so we decided to meander in and out of the stores surrounding the main market space as well as take a little more time to glance at each vendors' goods. 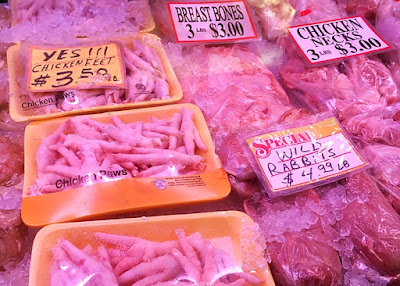 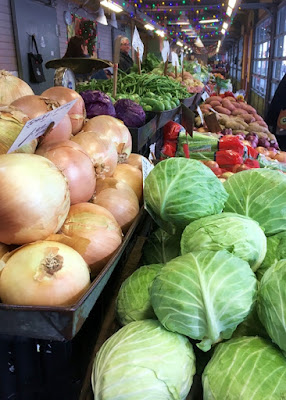 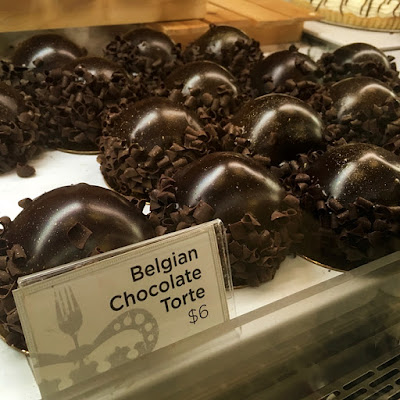 Perishable goods were out of the equation on this trip, but we did walk away with some craft vinegar from MadHouse Vinegar (utilizing some of the wort and other "waste" products from local wineries and breweries) as well as our first ever figurative chestnuts roasted over an open fire, which proved to be a unique taste experience and a nice snack on a chilly morning. 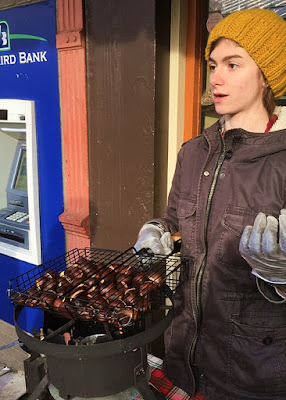 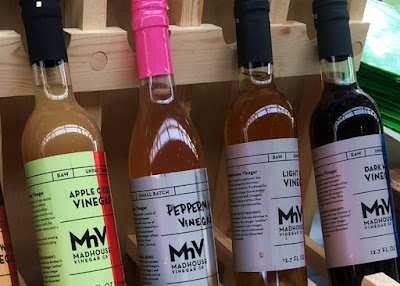