Back in a seemingly more distant younger day, I justified my fast food leanings with a reason that sounded good at the time, if you were trying to pack on 5-10 pounds of weight per year (which, sadly, proved to be prophetic.)  I surmised that those fancy, visually stunning, incredible tasting, generally more reasonably portioned dishes from restaurants my family could never ever afford were a ripoff. I mean, when you could get a truly filling value meal of sandwich, side and soda pop for around $5, why would I want to spend dozens of dollars more on something that would require a trip to the local fast food place later to sate my hunger?

Ahh, you silly, misguided younger person. To paraphrase a quote from Red, the convict played by Morgan Freeman in one of my favorite movies ever in The Shawshank Redemption, "I want to try to talk some sense to him, tell him the way things are." But thankfully in my case, I didn't need a meeting before a parole board to learn my lesson that there is a happy medium; I just needed a couple meals at Service Bar. 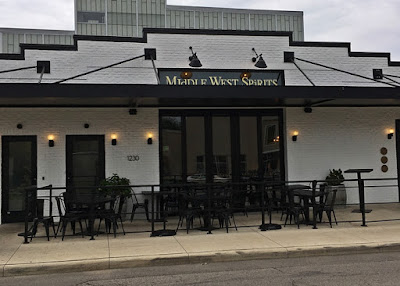 We had received a sneak peek at this restaurant arm as well as a tour of the distilling operations of Middle West Spirits back in April of 2017.  The restaurant arm opened half-a-year later, but for reasons still a little mysterious to us, it took nearly a year before we finally made the trek into their finished space. Unsurprisingly, that fabulous marble and Brunswick wooden bar dating back to the late 1800s we glanced at during our preview anchors this buzzy space, while large glass windows let you peer into the production space. 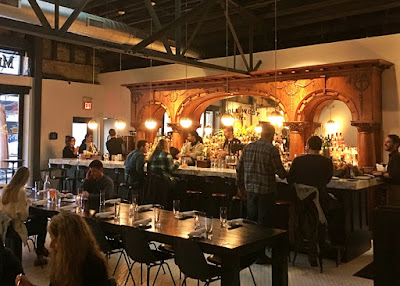 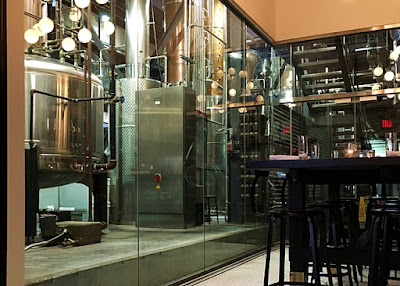 Service Bar's Executive Chef Avishar Barua loves his fast food, as documented in this Columbus Underground interview earlier this year.  His history, with stints at the acclaimed gem Veritas when it was in Delaware, as well as New York's Mission Chinese and WD50, also showed a flair for experimentation. Unsurprisingly, Barua marries the two together with Service Bar, where even the most basic dishes receive a twist, like the Pepper Steak (featuring Charleston Gold Rice) or the Whole Chicken Service (decidedly Indian sub-continent influenced with a Tandoori roasted breast, Murgir Jhol, and Onion Naan.) In this regard, the Market Fish special on our visit featured a perfectly cooked Halibut on a bed of Chinese Sausage Fried Rice.  I had not had Chinese Sausage since I lived in the Bay Area, and I would not expect it in a Columbus restaurant dish.  Yet, here it was, and it was completely satisfying. 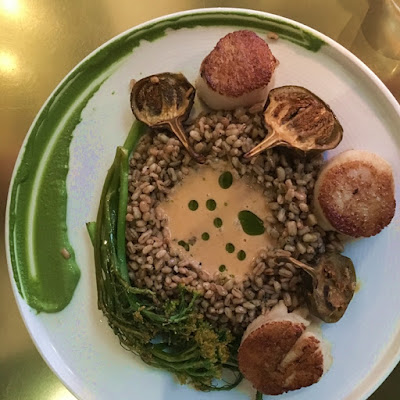 My spouse's Penang Scallops, featuring curry sauce, Farro, Roasted Broccolini and an Eggplant Escabeche was as visually appealing as it was prepared, with perfectly cooked components and a nice flavor interplay.

On our next visit, we figured we had to go "fast food" with our choices, and a surprising component wowed our senses.  The Pastrami Rachel and day's Fish Filet Special both featured their requisite twists - the homemade Kimchi added a little spice to the mix compared to the more typical Sauerkraut to the former, while my Chilean Sea Bass made for a nice taste and texture change from the typical Pollock or Cod fish in fast food versions. 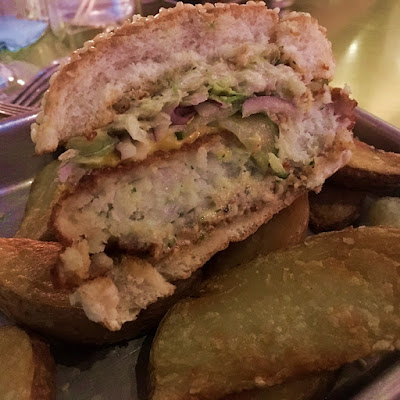 But for us, the Jojo potatoes were unexpectedly amazing; for as thick-cut at these potatoes were, they all uniformly featured a wonderfully crispy exterior, fluffy interior, and a lovely salty base. We found out later on a labor-intensive brining/freezing/frying process made these Jojos a bit magical.

Dessert? The Cinco Leches cake was simply displayed but was a much more complex beast, featuring blueberry, Rumchata, and a melted graham to the side to add textural contrast) was a nice hint of what that end of the menu held. 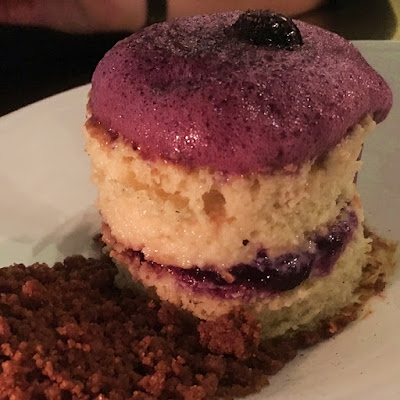 And perhaps unsurprisingly, the cocktails are top notch, from their classics like the Bombardier and Perfect Dark (a variation on a Manhattan) to more creative concepts like All The Best Words, which had a nice interplay between the tang of the citrus and the smoky hint from the Ancho Reyes. 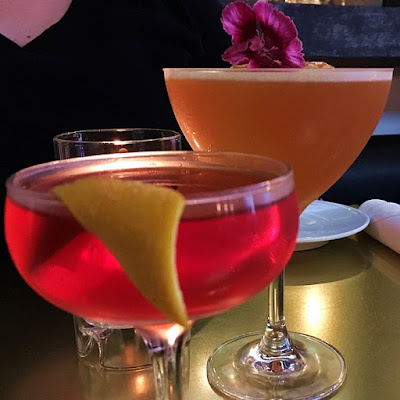 When you're experimenting like Barua is, there's always a chance that some people won't get it, in terms of straying beyond the traditional or paying a little extra for something "mundane" as a Gordita Crunch. But this experimentation component for me is highly welcome, an element that has been in short supply in this metro, so even the occasional miss can be forgiven (so far, nothing we've had has rated as such.)

Matched up with has arrived on the Columbus scene in the recent times (Service Bar joined an almost even split of buzz-worthy newcomers and established eateries in Columbus Monthly's Top 10 Restaurants of 2018) and what is sure to challenge for the top of the charts next year (including but not exclusive to Ambrose and Eve, The Lox Bagel Shop, the plant-oriented twosome Comune and Woodhouse Vegan, and more concepts from the prolific Cameron Mitchell), and the local food scene may never have looked brighter than it does going into the upcoming new year.

Bonus: In the spirit of the upcoming holiday season, check out my Instagram account for a giveaway for two free distillery tour passes to Middle West Spirits.
Posted by Joe