Nothing Can Take Me Away From Wor Sue Gai: Rice Bowl

As I have written before when it came to my saga when it came to Downtown Columbus-based Ho Toy Restaurant, American-style Chinese food is something I don't generally seek much these days. However, it did and does fill an important role at my family gatherings, so it will no doubt continue to hold random craving status for the rest of my dining life.

Of course, a little bit of history and circumstance can overcome the random craving frequency, as it did with a dish I've generally seen as Wor Sue Gai on menus here. Frankly, I didn't know what that exactly was and had no desire to ask, until I stumbled upon the Eater.com article linked in the photo caption above. As explained in the article, this dish, which has acquired a cult popularity in Southeast portions of Michigan, has its roots in Columbus, Ohio, with old school places like Ding Ho and Wing's (via Bexley's Far East Restaurant.)

When I saw that the dish was essentially "fried chicken and gravy", that struck me as an ultimate kind of comfort food, maybe even something like Jollibee's Chickenjoy.  Add in a cold day filled with constant snow flurries and the possible indication that a restaurant that I had always wanted to visit might be on its way out, and I figured it was time to proverbially kill the two birds with one stone. 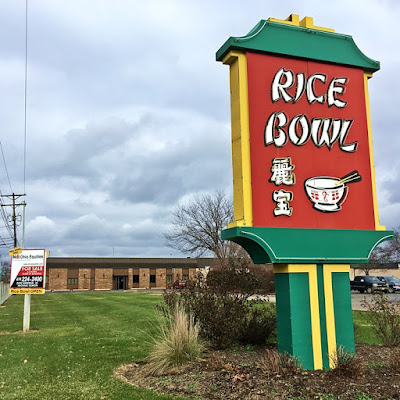 That indication relates to South Columbus's Rice Bowl, which caught my eye several years back with its colorful, old-school neon sign.  What caught my eye on this trip by was the "For Sale" sign planted prominently in the large green space fronting the property (and indeed, the property is listed for sale online), with a smaller clause on both that sign and a vinyl banner straddling the chain-link fence in front that the restaurant was, yes, indeed open.

Rice Bowl has a history that in terms of year of origin matches that of Ho-Toy, starting operations in 1959. According to their website, they've occupied their current space on South High Street for almost 28 years.  On this middle-of-the-week lunch time visit, the place proved to be reasonably busy with customers with the occasional hungry patron arriving for a call-in order. 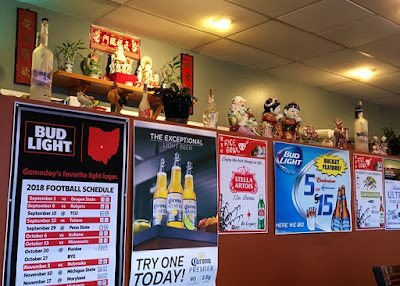 Unlike their downtown-located brethren, Rice Bowl's interior seems to have been spiffed up recently, with a nice color scheme and requisite pieces of Chinese artwork and media scattered about. The presence of a bar toward the rear of the space, plus promo materials featuring macro beer specials and an Ohio State University manually updated score chart (and yes, all scores for the season were filled out, including a sad face next to the Purdue loss), gave me the impression that this eatery has a fair number of folks gathering for brews and college football, something I didn't necessarily expect. 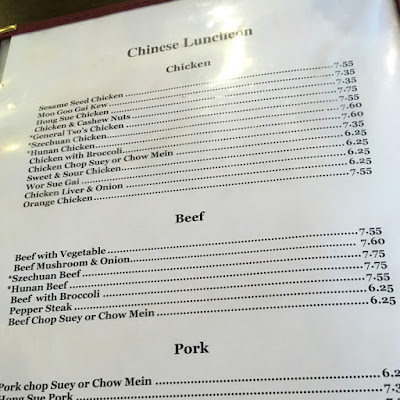 I gave a cursory look to Rice Bowl's menu - nothing seemed to be out of the ordinary for an Chinese-American restaurant - but that mattered little on this visit as it was the Wor Sue Gai that I was seeking. On the advice of some intel I had received from my fellow blogger colleague CMH Gourmand, I nabbed an egg roll, which he stated are hand rolled weekly and one of the best items the restaurant serves. 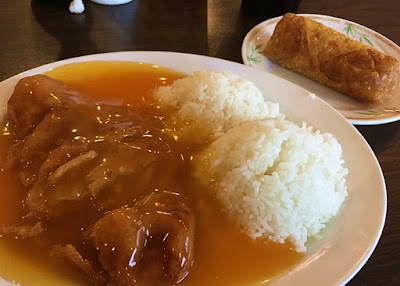 First, the egg roll - as my colleague hinted, this egg roll was indeed quite good, fried up nicely and sporting a nice blend of finely shredded cabbage, bamboo shoots and pork bits inside.

As for the Wor Sue Gai, the most notable variable missing from Rice Bowl's version is the chopped nuts; indeed would've been a welcome added textural contrast. Perhaps a bed of lettuce (versus rice) would've been welcome as well, though I'll need a version featuring such before I make up my mind. The gravy was a bit gloppy, but its lightly gingery tinge was a welcome element. Most importantly, the chicken underneath was fried up quite well - the meat was neither dry nor rubbery inside, and the exterior stayed crispy a lot longer than I would've expected all things considering.

All-in-all, I got the feeling that Rice Bowl's version of Wor Sue Gai is not the definitive one, but it was more than adequate for a baseline reading on this dish. With winter on the door step and plenty of comfort food on the docket to combat the cold, I figure at least one more exploration from the places of origin is in order.

And while I imagine market forces are a bit less energetic for the southern reaches of the metro versus somewhere like the Short North or Italian Village, it appears that you might not have much time to visit this long-timer in the Columbus restaurant world.