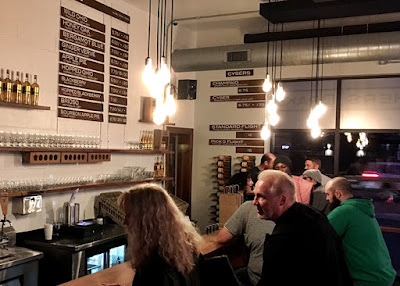 Starting operations in 2008, Brothers Drake has made their place on the north edge of the Short North a popular hangout with the locals, combining jazz and local music with mead and mead-inspired cocktails. Current owners Oron and Sarah Benary (also responsible for Brothers Drake's west coast cousin San Francisco Mead - I wrote about both of these places in this blogpost) have taken more control of operations here in Columbus last year, scaling back temporarily in 2016 to get the balance between mead production and music venue more in line with their vision.

For our little merry group this night, the meads were the focus, with the newcomers generally opting for flights and the locals opting for the most recent vintage of their Bourbon Barrel Apple Pie, which was released to the public earlier in November. For me, this was another winner in the bourbon barrel aged beverage category, with serious consideration for a bottle purchase before we left. 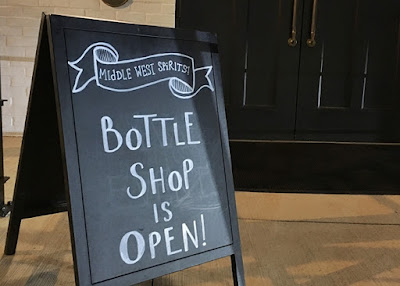 However, that bottle purchase order honor went to Brothers Drake's figurative next door neighbor in Middle West Spirits and their Service Bar. My spouse and I had been on a tour of the distillery earlier this year (as detailed on this blogpost), and we were hoping that this would be our first test out of Service Bar, which opened to the public a couple months ago.

Alas, our group was just a little too large for them to handle comfortably, so we decided to move onto our next destination this day. With that said, we weren't going to let this opportunity slip by without buying some of their spirits, so we went with a bottle of their Michelone Reserve Bourbon Whiskey and my brother-in-law and his spouse grabbed three bottles of their own, including our recommended Vim & Petal Gin and their Stone Fruit Vodka. 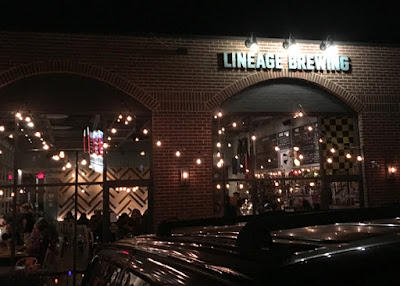 We then wandered up High Street to drop by Lineage Brewing. Ever since this Clintonville-area microbrewery opened its doors to the locals in 2015, it has become a neighborhood magnet, as well as a favorite destination for my spouse and me. Their brews, led by their popular Spaceship #6 IPA and their Passionate Bernice (a passion fruit Gose), are so popular at their brewpub, their availability at taps around town is somewhat limited. 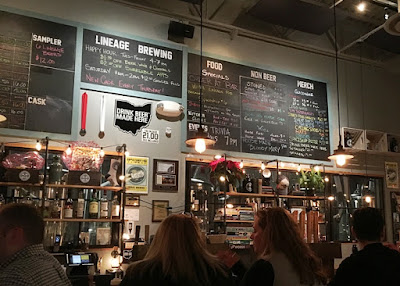 Unsurprisingly, the joint was packed this early Friday evening.  We managed to scrounge up a table and order us some brews and food. The latter has remained something of an underrated draw for my spouse and I, with seasonal menu items, brunch service, and of course those signature hand pies. While not quite having the punch of the Hot Chicken Takeover/Jeni's Splendid Ice Creams/Little Eater/Northstar Cafe contingent of eateries farther up High Street, Lineage and surrounding eateries like Lavash Cafe, Aladdin's, Harvest Kitchen, Old Skool, Gatto's Pizza, plus newcomers Blunch and Condado, give this Clintonville block or two a pretty fair culinary punch. 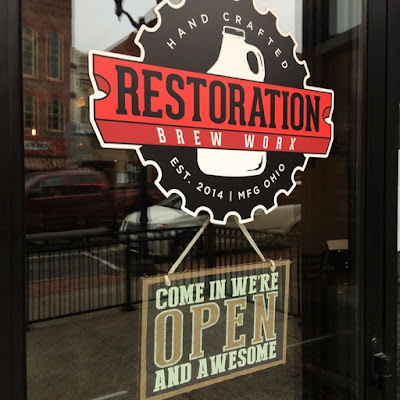 Our friends who joined us in Columbus said goodbye to us as we started back up north to continue our Thanksgiving with family over the weekend. However, our desire for exploration still hadn't quite fully been quenched, so we dropped into Delaware for some close-the-night-out beverages and snacks at Restoration Brew Worx. 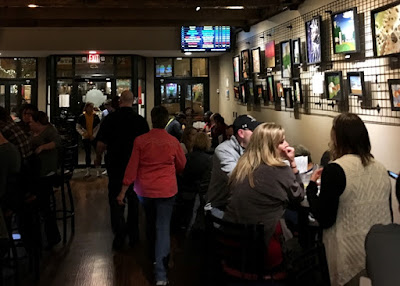 Similar to Lineage earlier that day, Restoration was bustling pretty nicely when we dropped by, and in a way, this was another sign of the area's maturing craft beer scene, with options cropping up outside of the central core of Columbus. In Delaware itself, its main craft beer destinations lie tidily in a one block area, including Restoration, Staas Brewing, and the homebrewing/bottle shop Barley Hopsters.

It turned out to be a perfect close to a great night of camaraderie and good spirits, with lovely beers and some tastier than you might think menu items (our relative with a gluten-allergy raved about the salad she ordered.) While next year will probably bring about a different destination on our Black Friday tour, rest assured it won't be another six years until we as a family explore more craft beer and spirits destinations in the Columbus area.