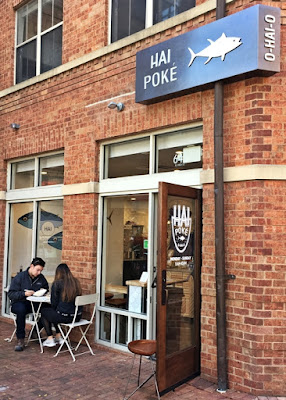 Starting off with just a mere notion sparked during visits to Los Angeles, co-owners Nile Woodson and Mico Cordero took the idea of the poké bowl (at its roots, a combo of ahi tuna chunks, various vegetables, and sticky rice) and transformed it into what would become Hai Poké in Summer 2015.  The pair tweaked their creation over subsequent months based on diners' input, eventually adding in spicy mayo and their own special "power sauce" to make their bowl even tastier and more addicting. 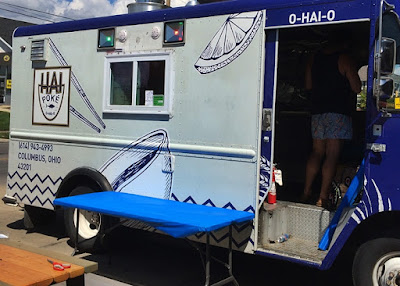 As their food evolved, the eatery's prominence in the metro did likewise, as they moved from pop-ups at Oddfellows Liquor Bar and Denmark on High to a regular weekday gig at the Downtown-located Pure Pressed Juicery.  The addition of a food truck added a brewery presence, earning them a spot in the regular rotation at the former Zauber Brewing rotation (the new tenant, Endeavor Brewing, has also adopted them as their regular Sunday food truck.) This progression finally resulted in their very own brick and mortar space in the bustling Short North. 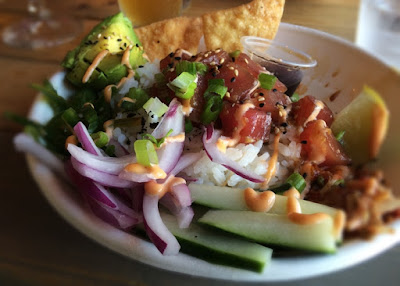 Personally, I could stick with their base model poké bowl on every visit. Actually, the salmon and tofu bowls (I have not tried the veggie bowl) have their positives, but the ahi tuna provides a pleasingly firm texture that the salmon and tofu do not have.  Add in the crunch of wonton chips, the crispness of the various veggies, the creaminess of the avocado, the light saltiness from the dressing and the tang from the lime, and you have yourself a truly refreshing, satisfying, and healthful meal. 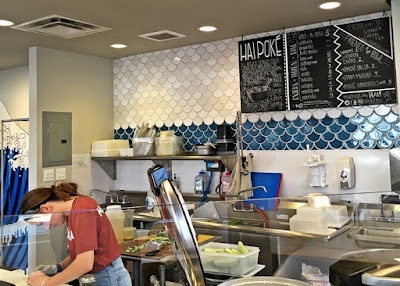 However, I did want to veer off tendency when I dropped into their cozy new cafe, which opened up not even two months ago. The space, a former vintage goods shop, reflects their food offerings perfectly, from the fish-scale tile backdrop to various murals of tuna and waves painted along the walls. Bonus points (from my standpoint, anyway) for the cool music playlist during my stay, which ranged from original Jonathan Richman and the Modern Lovers to songs by The Descendents and The Cramps, with a couple of Ramones songs (and not the usual ones you hear) to boot.

I found the menu didn't have too much more available than their prior pop-up services; while I have heard that the eatery has additional menu items in the works, I really don't mind that their menu is still more or less the base model. The Handroll, essentially the sushi-fied version of the bowl, is just filling enough to qualify as a light lunch, and the bag of OH! Chips-brand Wonton Chips may just be my favorites from them, sporting familiar wonton taste with a pleasant crunch that reminded me quite a bit of pork rinds, which I gobbled in mass quantities in my younger days. 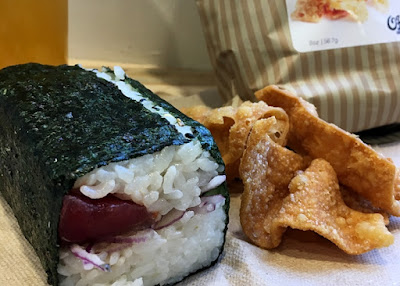 I was disappointed to find they were out of Spam (which actually reminded me at the time of this recent weird little tidbit about that famous (infamous?) luncheon meat), so there was no trying the Musubi on this visit.  But as the saying goes, that gives me more than ample reason for a return visit for another shot at some O-Hai-O mojo.