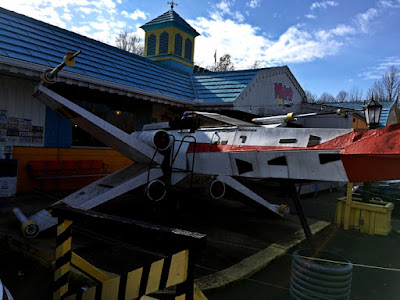 First off, the weather in Ohio has rated as supremely comfortable right now for the last couple weeks. While mid-fifties temperatures may not threaten any high-temperature records for Columbus (the highest high temp for the month is a ridiculous 76 degrees back on December 3, 1982), they are more than enough reason for my spouse and I to venture out on a whim to undiscovered parts of the state.

It really didn't take all that long to figure out where to go either. With all things Star Wars creeping into our minds with the impending release of the sequel, a suggestion by my spouse to head up towards the Akron/Canton area rang a bell in my head about some kitschy diner up with a mock X-Wing guarding its front. After quickly searching for a picture of it on my mobile phone to show her, the decision had been made: lunch date at Mike's Place in Kent, Ohio. 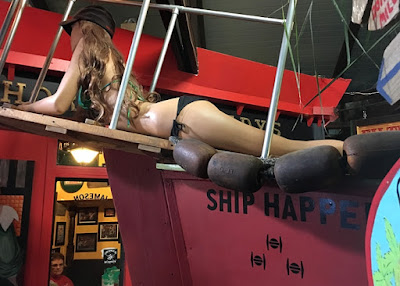 As it turned out, the X-Wing outside was just a hint of the random stuff that Mike's Place has gathered in its thirty years of existence (owner Mike Kostensky opened his diner's doors to the public September of 1987.)  It is this randomness of decor that often distinguishes these local hangouts vs. the chains: at Mike's, while signage is dominant motif, plenty of other tchotchkes and objects to draw your attention abound (a section up front even features books authored by Kostensky himself.) You can even find dollops of wry humor are scattered among the kitsch if you look hard enough. 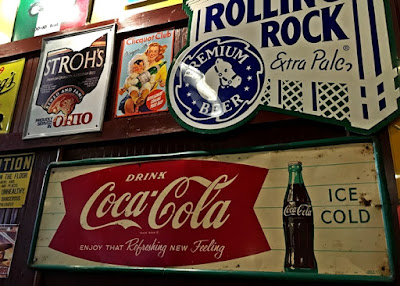 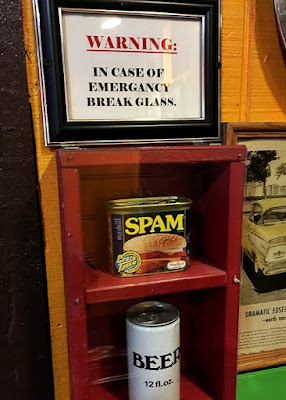 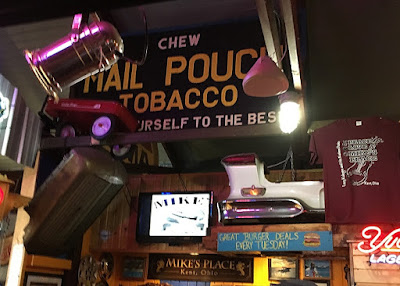 The interior even sports a full-sized bus where you dine in if you choose. Perhaps that's somewhat appropriate in that the general atmosphere reminded us a lot of West Virginia's Hillbilly Hot Dogs (though not quite as over-the-top) blended with your roadside diner of choice. 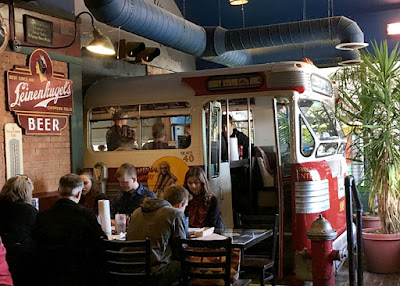 That wry, deprecating humor is also evident on Mike's Place's menu. Pop culture, menu "translations", sly digs at themselves and other popular targets, and hammy wry bits lie scattered throughout the expansive menu, which covers the gamut of diner staples like burgers, sandwiches, wings, pizza and more. 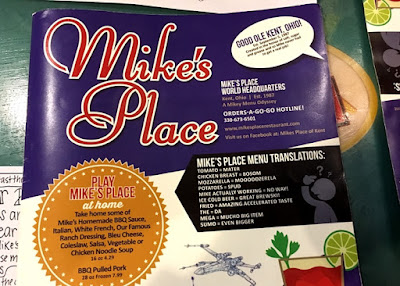 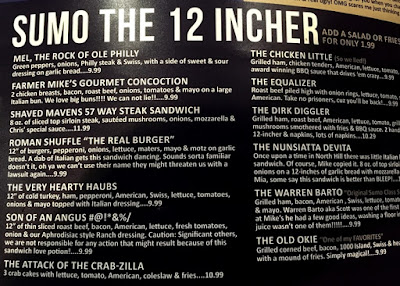 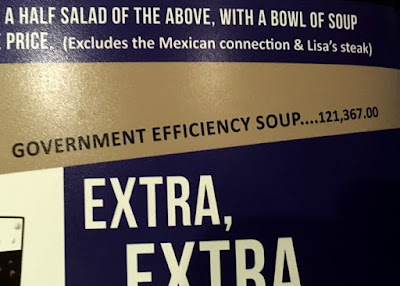 With the big menu (and pretty generous portions, as we found out), the first-timers or occasional visitors to Mike's are going to have a tough time figuring what the true gems are. Perhaps the best strategy in these cases is to go with what sounds familiar or, in our case, go with whimsical. 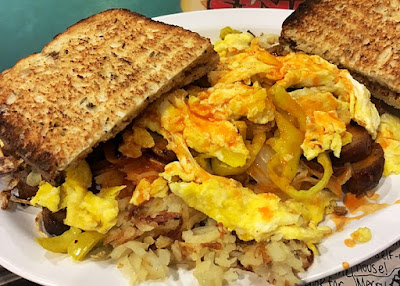 I had a hankering for some spicy heat, and the "South of the Border" was one of the few things that was warned to be hot. However, I found it to be more tangy than mouth burning due to the abundance of yellow peppers (I jazzed it up even more with some Frank's Hot Sauce.) Featuring eggs and toast how you like it (I went with scrambled and rye, respectively), Cajun spices, clumpy hash browns, Italian sausage, onions and cheese, this reminds me of a dish I might construct from random ingredients I have in the fridge. It's definitely tummy-filling fare, perfect for fueling up before a big event or aiding your hangover recovery after a party-too-hard night. 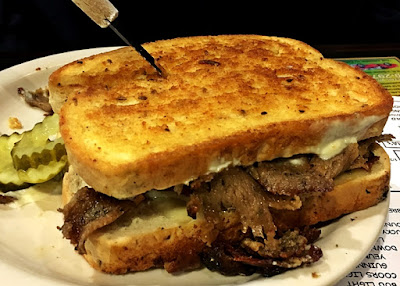 My spouse's "I Am So Confused But Oh I Like It" sandwich was something we both enjoyed - featuring gyro meat and corned beef, blue and Swiss cheeses, and rye bread, it just all kind of works well together.  My spouse got hers with a pretty basic side salad with a couple minor twists, including their so-called "White French" dressing (which tasted a little like cole slaw dressing.)  By the time we left Mike's we were all plenty nourished for our remaining adventures that day.