On last year's inaugural Holiday Edition of Vinyl COHvers, we found our selves in the Northeast corner of the Columbus metro in the suburb of Westerville.  In that post, we featured three songs from the Westerville High School Choruses and Orchestra, from a recording that had reached its golden anniversary (the album contained music from a Christmas music festival from December 19, 1966.)

This year's Holiday Edition of Vinyl COHvers moves only a few miles west along the I-270 beltway to another "W" suburb in Worthington. 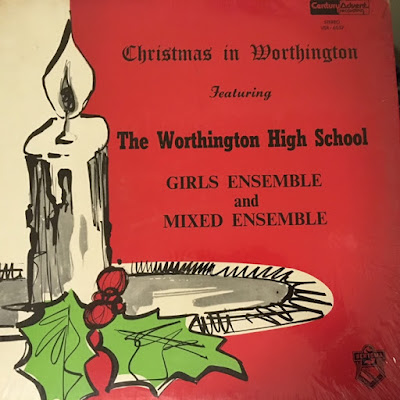 Worthington is essentially an island surrounded by the Columbus metro these days, despite being founded (1803) roughly a decade before its capital city neighbor. Founded by businessman James Kilbourne and friend Thomas Worthington, the town was designed like a New England-styled village with a central public square (which is now the downtown/Old Worthington section of town.)

The original Worthington High School, established on East Granville Road in 1894, now houses the students of Kilbourne Middle School. In 1916, a larger high school space was established in the building that now houses the McConnell Arts Center on West Granville Road. The school's current home began construction in a farm lot just to the west of the now McConnell Center in 1950 and was finished two years later (the city's second high school, Worthington Kilbourne, opened its doors in 1991.)

As far as the album, the main thing that stood out was the recording company: instead of the usual recording company I have found with these records in Columbus' Mus-I-Col, a Cleveland-based company (Century/Advent) does the honors here. Discography sites don't seem to have any attribution of this record to the company, but based on the catalog number, it seems this recording was made in 1973 or 1974.

Interestingly enough, a 1976 lawsuit over with a competing company with the same name forced Advent Records to change its name; the remade Telarc Records would go on to be a "brand...renowned for its technical innovations and audio excellence", as noted on its company website.


The music on the recording leans mainly on contemporary Christmas compositions, including "Jingle Bells" and "Have Yourself A Very Merry Christmas" being among the most familiar to listeners. Included in this grouping is "Sleigh Ride", a composition by Leroy Anderson whose best-known renditions lie with Arthur Fielder and The Ronettes. On this video, I've enclosed random snowy photos I've taken over the years to enhance the song's mood.


This second song takes a wry look at the traditional gifts touted in the Christmas standards "The Twelve Days of Christmas". Written by Frederick Silver in 1968 and performed famously by comic genius Carol Burnett, "The Twelve Days After Christmas" (attributed wrongly on the record label) song offers a thought on what we might really deep down think if someone gave us swimming swans and french hens. The song here is accompanied by a slow-motion walk through downtown Worthington with all its pretty holiday lights.


Finally, we end this edition on a beautiful and just a touch wistful "Christmas was Meant for Children", a 1958 song written by Gordon Goodman and Fred Waring. The accompanying visuals were part of this year's "Illuminating Shopping Day" in downtown Worthington, including some of the windows for the "It's a Wonderful Window" contest which help raise funds for various local charities.


Here's hoping you enjoy these little bits of the past, and here's wishing you and yours a very Merry Christmas.
Posted by Joe