I am not one who craves material things all that much, but one of the items that I have received as a gift from my spouse has been one of my most cherished. My Audio-Technica turntable may be a basic edition, but it allows me (not to mention my spouse) to relive our days when vinyl records were king. 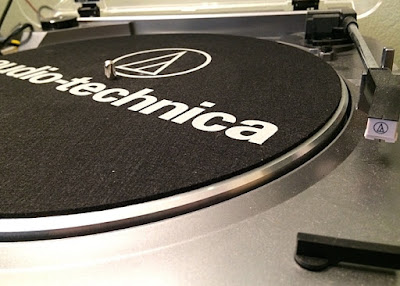 Unsurprisingly, one of our new favorite activities has been to refurbish our vinyl record collection. I had a few vinyl records from my younger days (mainly 1970 and 1980s vintage vinyl), but even with the resurgent market, old vinyl can be found at relatively bargain prices at numerous estate sales, antique stores and record stores.

I have Greenville, South Carolina to thank for what has become one of my unofficial official quests during my search for vintage vinyl. At Horizon Records, located just north of the main downtown area, I stumbled across a compilation album put out by one of Columbus' long-time rock stations, Q-FM-96.  Looking back at it, I suppose it wouldn't be too surprising that this compilation record would be found at this record store. but at the time it was such a novel find to me. Coupled with what I thought was a fair price as well as an increasing desire to learn about the history of this area, I took possession of it that day.

Since then, I've been on the look out for records that have some unique and/or novel connection to this area. As the vinyl collection as well as the reach of this blog grew, I had it in the back of my mind to share a little bit of my finds for you readers once I had the time and capability to do so.

Well, that capability has now arrived, and now the time is nigh - here is my first ever Inaugural Vinyl COHvers post.


My first album share has its origins in Westerville some 50 years ago. Established as a village in 1858, the 1966 version of Westerville was approaching 10,000 people in population. With the I-270 Outerbelt Freeway still under construction, State Route 3 still stood as the fastest route from this town into other parts of the metro. And true to its history as home of anti-alcohol organizations like The Anti-Saloon League, Westerville was still firmly as dry a town as it ever had been (the city's designation of "Dry Capital of the World" would remain in full effect for nearly four more decades until 2004, as it turned out.)

In 1960, the city's first high school (Westerville South) was dedicated, and it is undoubtedly from here where most, if not all, the performers of this first featured album came from. 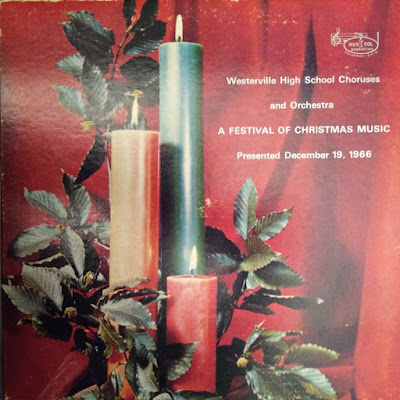 This album is one of my more recent finds, and with the date listed and the general lack of holiday music in my stash (I'm pretty much a traditionalist: I'm more than happy listening to Christmas music from the first day after Thanksgiving until New Year's Day), I figured this was a pretty good add to my collection for a mere $1. As you might be able to tell by the date, this performance was put on pretty much spot on fifty years to the date of this post.

I don't know what I was expecting, but the performances here were more than listenable. Perhaps the most ear-catching thing on the album is a sung(!) version of poet Clement Clarke Moore's A Visit from St. Nicholas.  More popularly known as 'Twas The Night Before Christmas, the recorded rendition stood out to me as something I had never heard before, but at over seven minutes long, it was a touch long to put into a YouTube video (not that I couldn't be convinced otherwise, however.)

The three songs I chose instead do more than give you a taste of the recorded performance, including one of my favorite Christmas traditional songs ("Do You Hear What I Hear"), another which I was unfamiliar with ("Born, Born in Bethlehem"), and a more contemporary holiday song ("Holly Jolly Christmas.")

As far as the record music label, Musicol is still going strong today. Started in 1964, the North Linden-located studios still is providing audio recording services and transfer services of all types. Even back in 2008, this Columbus Dispatch video story noted things were trending brighter for these studios because of the vinyl revival, and I can imagine the demand has only grown since then.

But because the season of Christmas is all about giving, here are few more Christmas nuggets that I hope you will enjoy:

"Still Love Christmas" by Colin Gawel and the Lonely Bones - Recorded at SoHud's Rumba Cafe, longstanding local favorite Colin Gawel (who also owns and operates Upper Arlington's Colin's Cafe) waxes sentimental about his love of the season despite the departure of his love. Bonus points for the end of the song reference of the one and only Dick's Den.

"Fruitcake" by The Eraserheads - similarly to the Gawel's song, this ditty by the so-called "Beatles of the Philippines" posits that the holiday season may feel lost for some ("Everybody, everywhere people do you really care/Christmas time has once again arrived/Mistletoe and a little snow/But we don't get it there at fruitcake heights") but ends with a hopeful note that you can find the spirit if you try hard enough ("Take a bite/It's alright/A little lovin' and some fruit to bake/Life is a piece of cake.")

"Christmas in Hollis" by Run D.M.C. - not only is it proof that Cadillac produced some pretty flying machine, but also this song off of 1988's "Tougher Than Leather" is about as dope a Christmas song you can imagine. Paired up with just about anything off of Bootsy Collins' long-player "Christmas Is 4 Ever" and your season will be about as P-Funky as you can imagine.

On a personal note, thank you for reading along: I hope you all have a truly wonderful Christmas season and a truly blessed and prosperous 2017.
Posted by Joe