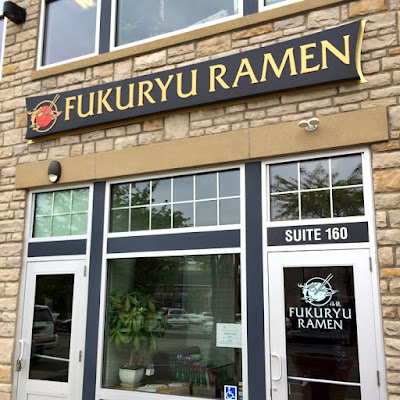 For those unfamiliar (or even semi-familiar) with the Columbus ramen restaurant Fukuryu Ramen, the restaurant's name translates to "lucky dragon".

If you look closer at how this restaurant's origins, you might think the name translated to "lucky kookaburra". Most people dropping by for a bowl of ramen these days probably don't realize that Fukuryu originated in the "Land Down Under" in Melbourne, Australia (one of the lands that are home to the previously mentioned kookaburra bird.)  Maybe even fewer realize that it wouldn't even have been a dining option here if it weren't for an individual with strong ties to a fondly-remembered Columbus dining institution.

That individual would be Jeff Tsao, the son of Michael and Alice Tsao, who operated the beloved and highly kitschy Kahiki Restaurant for almost three decades. During a stint in Australia, Tsao came across the contemporary-leaning Fukuryu and felt it was a restaurant concept that would do well back in Columbus. 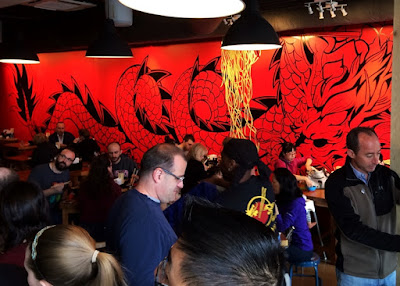 So far, so good for Tsao and his eatery - the Lane Avenue location, which opened to the public in early 2016, has proven popular enough to inspire a second location in Dublin's expansive Bridge Park. I personally have not been to the new location, but from all I've heard it's basically the same concept with a larger space.

Perhaps it should be no surprise that Fukuryu's Lane Avenue location is dominated a large red dragon mural opposite of the kitchen space. The space itself ranks on the smaller side both in raw size and room height as restaurants go, leading to a bit of a claustrophobic feeling when patrons cram the space during the rush times. Interestingly, the in-house seating mirrors this motif, giving us an somewhat rare bit of comfort in that the chairs fit shorter-legged individuals like us a lot better than our taller counterparts. 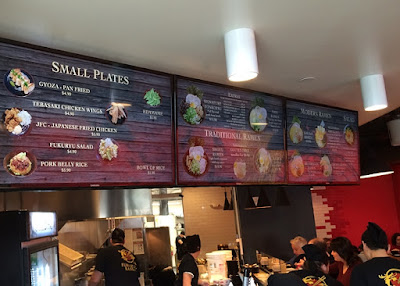 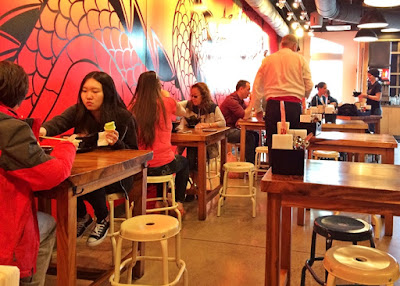 Ordering is done at the counter. While Fukuryu doesn't have the largest menu, those unfamiliar with the menu might want to familiarize themselves with the menu online before popping in for a meal. We have found the staff behind the counter very helpful and quick in explaining the various menu options, however. A selection of pop and adult beverages, including sake and craft beer, are also available to slake your thirst during your visit. 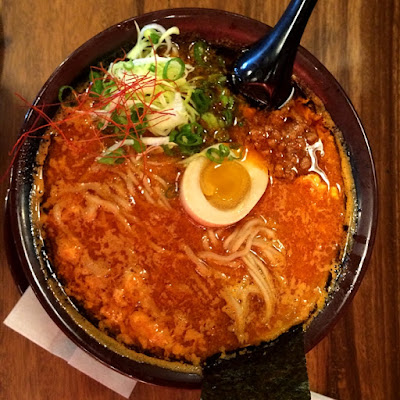 Maybe its our spice-head tendencies, but our clear winner from the ramen menu is their Red Dragon Ramen. This chicken-bone-broth-based soup comes with spicy chili pork and sliced pork belly and threw out some pretty nice flame at the highest spice level (Fukuryu offers three levels of spiciness to diners.) The noodles used here and in all of Fukuryu's dishes are all based on an in-house recipe and manufactured here in Central Ohio.

Other nice ramen options include their flagship Tonkotsu, with a silken mouthfeel from the pork broth accompanied by noodles, pork belly, wood ear, mushrooms, bamboo and leeks, as well as their Black Dragon Ramen. This seasonal offering brings the umami in spades, mainly due to the use of squid ink, and enhanced by black sesame and black pepper. 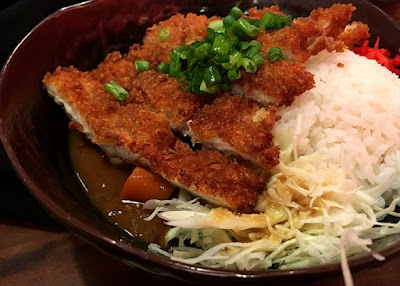 We've found Fukuryu's other non-ramen offerings to range in the solidly good range, including their Curry with Panko-breaded Chicken Breast (pictured above) and their Japanese Fried Chicken (pictured below with a pleasantly tangy Yuzu Mayonnaise dipping sauce.) Interestingly, we found the Tebasaki Chicken Wings (with a white pepper dry rub seasoning) a bit more enjoyable than the spicier Dragon Wings, which we wished had a bit more heat quotient built in. 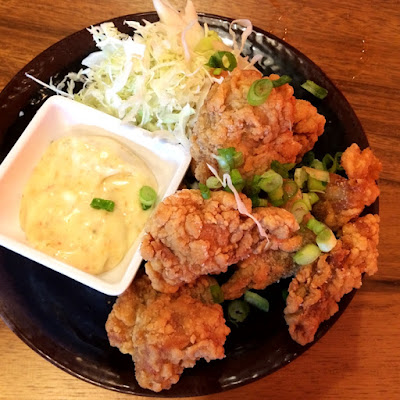 Fukuryu may not be our favorite ramen place in the metro, but there's certainly more than enough here to earn it consideration whenever we're in the area. And with winter arriving into the Buckeye State in full force, a bowl of that Red Dragon Ramen sounds even more and more tempting when the thermometer dives into the low end of the scale.