A quick return from the West Coast for a slightly more local blogpost....

Being more or less locals in Central Ohio now, revisits to favorite places generally don't take terribly long, as they do now with our California travels (prime example: my last blogpost detailing our visit to Vallejo's Moschetti Coffee and Sonoma's El Molino Central.) However, a place does slip through every now and then, and in this case, it was fun to track the progress that the Warped Wing Brewery in Dayton, Ohio has made between our visits.

Opened in January 2014 in the Oregon Historic District, Warped Wing Brewing rated at that time as the area's largest craft beer enterprise to date. From the beginning of our first visit just two months after their opening, the sheer size of the space (the building had former life as a former metals foundry) gave us the hint of how big this enterprise might possibly be. The taproom space had plenty of room for guests, and there seemed like there was even more room in the production area in the rear, not surprising with their initial installation of a 30-barrel system and canning line.

On our first visit, Warped Wing was still finding its way a bit. We sampled their base brews in flight form, including a decent 10 Ton Oatmeal Stout (named in reference to the 10 ton box crane within their facility), an even more tasty Flyin' Rye Rye IPA, and perhaps our first experience with a brewery-produced cream ale (their Ermal's, a nod to Ermal Fraze, the inventor of the pop-top can,) However, as alluded to in this The Beer Blog post by Rick Armon, the team behind Warped Wing had many more brew styles in mind, even if they weren't quite sure what they would be yet. As brewmaster John Haggerty stated in the post, "There is no plan. The plan is to have three (base brews) and let’s get open and start selling and we’ll make different stuff as we go along."

One of those early brews that fell into that "different stuff" category we sampled that day turned out to be a special treat. Their Maa Durga Red IPA was exactly as described, citrusy at the beginning, hoppy throughout, with a crisp bitter finish. Even as someone who generally tends to the porter/stout side of the ledger, I was in agreement with my spouse that this was one really good brew and easily the best of our first visit.

Since that visit, we had grown familiar with Warped Wing's unique and appealing can art; it wasn't necessarily easy to get a four-pack unless our travels took us somewhere within stone's throw distance of Dayton, but we managed just fine. However, it wasn't until last November when we got the chance to revisit the brewery itself, and that initial impression that Warped Wing was destined for bigger things came to life in the form of its special Whiskey Rebellion Bourbon-Barrel Imperial Stout release. 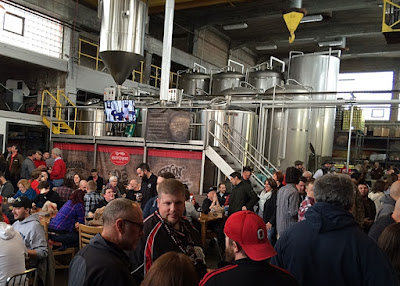 A year-and-a-half between visits can bring forth a lot of changes, and there were plenty to be seen, from a neat-looking Ermal's Cream Ale bike rack in front, an area stocked with pinball machines, plenty of brewery swag, and an area along the main tap area where you can just go in and grab cans of your favorite brews.

And then there were the swaths of people. This was definitely the biggest-attended special release that we had ever attended in the Central Ohio area: the buzz of people's conversations constantly lingered in the air as both people and pouring stations were spread out throughout the space, even in that previously only-seen-in-the-far-off production area. Almost everyone seemed to have a snifter or two of the special brews tapped for the day as well as their own supply of the newly released Whiskey Rebellion in hand. 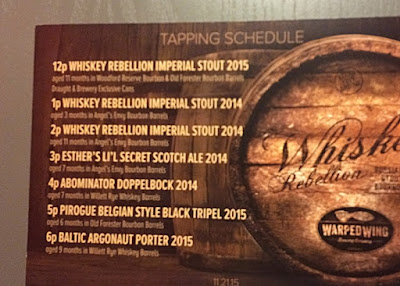 In truth, we were drawn here by something we had not gotten a chance to try the year before. One of my spouse's favorite memories is the chocolates from Dayton-based Esther Price Fine Chocolates that her area-based relatives would have out at Christmas time. The brewery's 2014 collaboration with the chocolate makers was a tap-only Scotch Ale brewed with the Esther Price's caramels that we had heard great things about, but was all gone before we could even consider making the drive over.

On this day, the Esther's Li'l Secret Scotch Ale 2014 aged in bourbon barrels they had as a special tapping was a nice brew indeed; that typical malty notes of the style were nicely complemented by the Esther Price caramels used in the brewing process, with a light note of bourbon brought on by the aging process. However, the 2015 version sounded even better (a milk-chocolate brown ale) and we grabbed a couple cans in addition with our Whiskey Rebellion to take home with us. Our first taste of this year's edition a week or so later did not disappoint: chocolate forward all the way, with fruity notes and a lightly bittersweet finish. This is a brew to sip and savor slowly, preferably paired up with your favorite goes-with-chocolate nosh.

While the initial focus was on Esthers Li'l Secret, we were also quite impressed by the star of the show this day. The alcohol burn of the 2015 version of the just released Whiskey Rebellion (a joint project collaboration with bourbon and whiskey-focused The Century Bar) let you know its 11.2 ABV was no joke. While the brew did not show much in the way of head, the bourbon in this delicious brew was quite noticeable, with an appropriately thick mouthfeel along faint hints of vanilla and cocoa.

The aged 2014 versions of the Whiskey Rebellion were different beasts altogether. The version tapped at 1 PM aged 3 months in Angel's Envy Bourbon barrels seemed to be in a transitional stage, making for a middling taste experience with a light alcohol burn, muted bourbon flavors and a mouthfeel more like good-line porter than imperial stout. However, the version tapped at 2 PM, aged for 11 months in those same barrels and one year removed, had transformed this brew into a smooth sipper, with equal parts bourbon, vanilla and cocoa playing on the tongue. 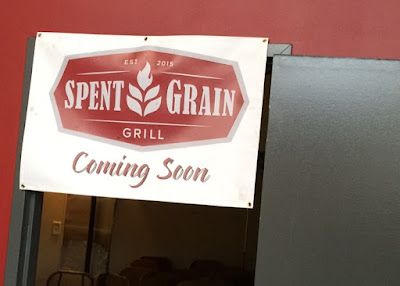 At the time of both our visits, customers who frequented Warped Wing could grab some pizza noshes through some partner pizzerias in the area. On this Whiskey Rebellion release day, they also had a couple of local food trucks outside to provide nourishment to the throngs. However, we managed to catch a hint of Warped Wing's next big venture: an independent restaurant within their confines in the form of the Spent Grain Grill. The eatery, which opened in December, features the beer or beer-related products of Warped Wing in a vast majority of typical pub-style offerings like pizzas, tacos and salads. Initial reviews have been positive, as noted in local media like The Dayton City Paper and the Dayton Daily News, giving us more incentive (as if we needed any more) to sample more of this brewery's wares as they enter their third year of existence.

Warped Wing Brewery is celebrating their two-year anniversary this weekend. Along with the release of their Baltic Argonaut Baltic Porter in both cans and draft, they will commemorate the day with special tappings, live music and food from the newly opened Spent Grain Grill. For more information on what they have dubbed their Beer Bash 2.0, please check out their Facebook page for more details.