While our recent travels with California were filled with a lot of new explorations, a couple of old favorites popped-up in our excursions.  Needless to say, they did not disappoint even with a few years removed between visits. 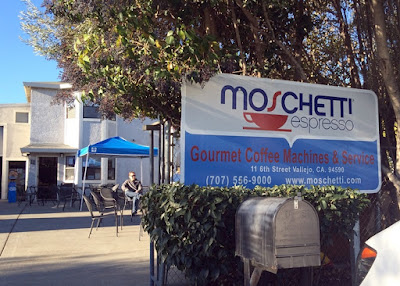 Moschetti Coffee: Similar to the craft beer phenomenon (see my prior post on Vallejo's Mare Island Brewing Company), finer coffee has bypassed this East Bay town until fairly recently. Even the goliath of Second Wave coffee, Starbucks, took their sweet time to come to town, arriving within city limits at the start of the new millenium (2001.) A few smaller, hometown-styled coffee houses dot the landscape, including the Ferry Building-located Panama Red (a small regional chain of coffeehouses) as well as the former gas station that has hosted Java Jax near downtown Vallejo for several years.

One of the more unique members of this small coffee clique has been making the rounds for more than 25 years, and has provided the locals a taste of what a more refined cup of joe can be for the last several years for absolutely free (yes, I said free.)

Fabrice Moschetti, a native of France who started the commercially-oriented Moschetti Coffee in 1989, acknowledged in a recent Vallejo Times-Herald article about his 25th anniversary that most of the people back then "didn't care. Coffee was coffee." But with the growth in the coffee industry (Starbucks, a company Moschetti definitely has some strong opinions on, grew by 12,000 stores in the decade after finally arriving in the area in 2001), Moschetti eventually found more and more interested in the hows and whys behind the coffee they were brewing and drinking, and he was only more than happy to help them out via what has become a regular community gathering in their weekly "Tasting Saturdays", where all coffee sampling is on the house.

This visit to Moschetti had been the first for me in a couple years and the first ever for my spouse. The interior of the facility, essentially a warehouse building with a small adjoining office, was setup more or less how I remembered from past visits - coffee beverage dispensers filled with brewed coffees from pretty much all of Moschetti's roasted beans are lined up throughout the space.

However, there were some notable enhancements since my last visit, mainly in the number of coffee brewing equipment systems in-house, from basic coffee brewers you might see in your corner cafe to fancier items like nitro cold brew and the Curtis Gold Cup, Not surprisingly, we found Fabrice himself stationed by the espresso machine, offering espresso-based drinks to those who came by to say hi or talk shop about coffee and current events. Even on this post-Christmas weekend, quite a few folks were already in-house early on; one person who seemed to be a regular felt comfortable enough to show up in flip-flops and a bathrobe.

Another eye-catching change lay outside of the main space: the facility has become much more reception-friendly. Along with the familiar cargo container filled with the roaster's beans, a seating area and a fire pit for the cooler (by California standards, anyway) winter weather conditions had been setup. More seats stood scattered about as well as a stage of sorts: at the time of our arrival, a local musician was setting himself up for an acoustic guitar performance. 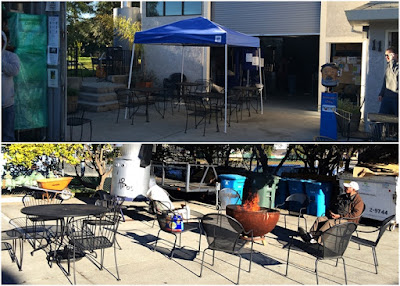 As befitting a community-based gathering, visitors can almost always find a couple of locally-based vendors selling their wares at the event. On this visit, sample and bring home the confections of Ian Scott and the bath and beauty products of Shameeka Dream. The friendly and casual conversation with these vendors, as these interactions often are, are perhaps some of the most favorite aspects of our travels. Even if many of these end up being single-shot experiences, they are often the main ingredients to a very simple but highly desirable goal: getting out of the house and having a great day for yourselves. 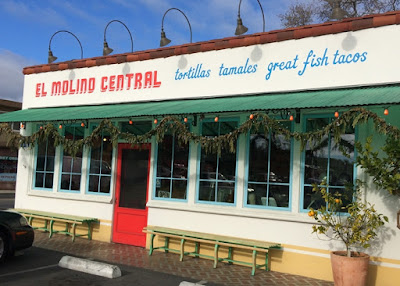 El Molino Central - Trends, hot neighborhoods and the latest"you've got to try this place" change rapidly in a food-focused area like the San Francisco Bay Area, so its very easy to forget about places that were in the spotlight even for the briefest of moments.

Our return to El Molino Central, in the easy-to-drive-by town of Boyes Hot Springs (most folks would see this small town of 7,000 as part of Sonoma itself) was one such place, until my spouse recalled it from a previous trip when we were still dating. It seemed like a good candidate for a revisit, as we enjoyed our food there and the vibe and the food are reminiscent of a Columbus eatery we have grown fond of in the form of Katalina's.

El Molino Central is a small eatery owned Karen Taylor Waikiki, who had long set her mark on the Bay Area dining scene through Primavera and their organic, homemade tamales and tortillas. Opened in the middle of 2010, her Sonoma-area cafe (the "Molino" in the name refers to the mill where corn is taken to be ground into masa; this eatery takes pride in milling its own masa) showed that her talent with food reached far beyond those two Mexican staples, sporting a seasonal menu with unique creations such as Swiss Chard Enchiladas and Chalupas.

Those same items were the very first we sampled on our first visit ever: my spouse loved the contrast of bitter provided by the chard and the salty in the cotija cheese in her enchiladas, while my dish (definitely NOT anything like the Taco Bell item) sported layered taste extravaganza of tender chicken, onions, beans and salsa on top of freshly-made masa. The pour-over Blue Bottle Coffee was just icing on the cake.

As we found out, not much had changed in terms of the building setup. Visitors find out quickly that the main building doesn't really have a seating area: the kitchen, preparation space, and the ordering area pretty much take up what is readily visible. While a small, functional patio-style seating area appended to the rear of the building remains an option (some additional umbrella-covered outdoor bench seats have been added since my first visit), El Molino Central is really suited for take out orders. Also changed is the coffee provider: El Molino Central has switched from Blue Bottle to a pretty-much equally regarded coffee roaster in Four Barrel. Our Honduran Ventura provided a fruity flavor profile for our wake-up cup of joe that morning.

The Chard Enchiladas were again on the menu along with other unique items like the Pozole Rojo with Tostada (hominy pork soup stew with traditional garnishes), German Butterball Potato and Cheese Tacos (with salsa, habanero, sour cream and pickled jalapeno), as well as tamale options and a special with Dungeness Crab. However, much to our chagrin, we had arrived a bit too early, so the only option available to us was their Chilaquiles Merida.

This turned out to be a rather delicious consolation prize, as these were some of the best chilaquiles we've ever eaten. The handmade tortillas chips (reminiscent a bit of the Shagbark chips used in Katalina's Huevos Rancheros), huge chunks of avocado, and a just spicy enough roasted chipotle salsa made this quite a satisfying and filling breakfast as we made our way through Sonoma's wine country this day.