While my spouse's multinational roots are fairly varied, the Eastern European (more specifically, Polish) side often comes through when we're looking for potential culinary destinations. A drive through Buffalo, New York on a trip to and back from Niagara Falls late 2014 allowed us to dive into one her favorite Christmas-time treats via Mazurek's Bakery in the form of kruschiki, or Polish Bowtie cookies. Cabbage rolls are also another favorite of hers from her childhood; if that item happens to be on the menu at any eatery we stop by, the decision is all but made up for her.

Eastern European cuisine has always held small presence in the San Francisco Bay Area to the depths of my knowledge, so anything new that pops up in that vein always catches my eye in general. In what seems like a completely unrelated tangent, my first experience with anything having to do with Lithuania, outside of the breakup of the old Soviet Union in the 1990s, came through the world of professional sports. Sarunas Marciulionis, one of the first European players to come play forthe National Basketball Association, was drafted by and then signed with Golden State Warriors (based out of Oakland) to play in 1989. He became an immediate favorite of mine and many others because of his hard-nosed and tough-minded style of play.

Thus, when my research came across a relatively new Lithuanian restaurant located in Alameda (just a stone's throw across a strait from Oakland itself), it seemed a natural to give it a visit. 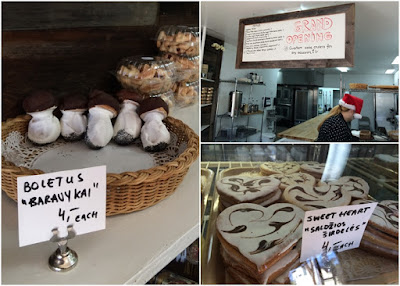 Mama Papa Lithuania Restaurant, opened in October 2013 by "Mama" Damute Sukiene and her son, "Papa" Vaidas Sukys, holds a space next to the recently-opened-to-the-public (October 2015) bakery portion of the business. Since we arrived a few minutes prior to the restaurant's opening, we stopped inside the bakery to take a look. Our clerk was quite welcoming (funnily enough, she turned out to be a Puerto Rico native and we got to discussing (the lack of) her cuisine in the Bay Area) and guided us quite well on the bakery's offerings.

A small glass case and some shelves off to the side held a variety of cakes, cookies (the Lithuanian words describing the cookie shapes, including mushrooms, stars and ribbons) and breads, were found displayed in the small glass case in front and on the shelves to the left. A few savory items were packaged in bags, including a fried rye bread rubbed with garlic which was available for sampling. Even as avid garlic lovers, we were taken aback a bit by the powerful allium punch provided by this bread. We grabbed a few treats for the road (more on this later) and headed over to the restaurant.

The restaurant itself offers an interior that seems to be in tune with its home city's maritime vibe (along with a naval base that was closed in the 1990s, Alameda is home to Coast Guard, numerous marinas and a ferry service), with blocky, bench-like tables and chairs, dark wood paneling dominating most of the walls. Framed street scene pictures from Lithuania's capital city of Vilnius dot the brick wall that separates the restaurant from the bakery space. 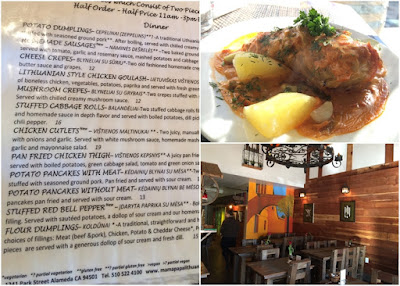 The choices seemed fairly in line with other Eastern European restaurants we have dined in with both some unique options and taste variations. We were glad to see that all their dishes were available in lunch-size portions, as we would have been quite stuffed had we gone with the dinner-sized meal. My spouse's Stuffed Cabbage Roll was a bit different from the Polish versions she grew up with but still very tasty and satisfying, sporting a creamier tomato sauce, more paprika and perhaps even a hint of clove. For me, my pan-fried Potato Pancakes with Meat was nothing fancy but still quite satisfying, with a crispy exterior and chunks of mildly-spiced ground pork within the fluffy interior, perfectly accompanied by the dollop of sour cream on the side.

Some of the other menu options, which we did not partake in on this quick visit, seemed to be worthy ventures on a future visit.  Both the bakery and restaurant offered Lithuanian Amber Tea and Pour Over Coffee, while the restaurant itself sported a beer list from breweries in Lithuania as well as a Bread Kvass, a non-alcoholic, fermented beverage made from rye bread. 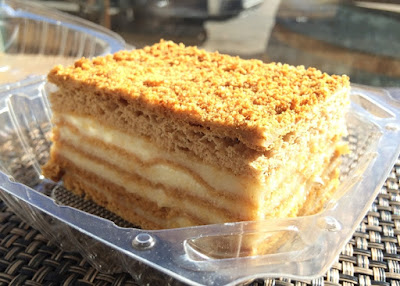