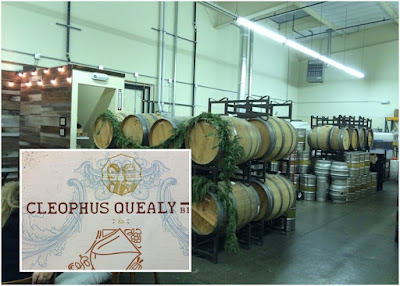 There's not much to see with the exterior of the Cleophus Quealy Beer Company's building; a somewhat smallish sign sporting the brewery's name hovers over the entrance of the space, located a few minutes from the Oakland International Airport in an industrial area of neighboring San Leandro, CA. In many ways, the experience we had driving up to this brewery, turning our heads every which way to spot our destination, was very similar to our visits to Columbus, Ohio's Sideswipe Brewing, which also lies in an industrial area in the city's Valleyview area.

The brewery's fairly expansive almost 4,000 square foot interior isn't all that fancy either, but the touches that are there makes for an agreeable and pleasant experience,  Tables and decorative barrels, topped with succulents (a nice decorative and drought-friendly touch) are scattered throughout this seating area. This theme is continued behind the tap area, where really neat chalkboard sketch of a Buddha's Hand provides the bar's backdrop. Faded wood paneling also lines the main tap area as well as selected covey areas along the interior walls. Rearward, the brewery's production side is very evident, with barrel racks, kegs and other brewing paraphernalia. As our time inside progressed, the general vibe reminded me a bit of Clintonville's Lineage Brewing. 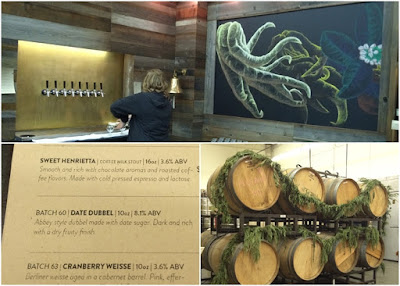 Opened in November 2014 by two former Google employees Peter Baker and Dan Watson, the brewing philosophy behind Cleophus Quealy (the brewery's unique name derives from a combination of past family names in each of the brewer/owners' respective family lineages) does not lie in a core inventory of flagship beers but are instead smaller-batched brews that play around with various beer styles. These beers are numbered on their tap menu with a helpful description; for example, Batch 52 was their Session Pale Ale, with centennial hops and peach and citrus aromas.

While the brewery leans toward Belgian styles (a love gained by the two during their travels through Europe in the late 2000s), other styles do pop in and out of the menu depending on the time of season. On the day of our arrival, several non-Belgian styles were on tap, including the newly released Sweet Henrietta, another very sessionable (3.6% ABV) seasonal coffee stout.

We took advantage of a flight of four of their current beers on tap, while my spouse let her love of cherries guide her choice in selecting the Batch 26 Cherry Red, an ale aged in wine barrels and finished with sour cherries. This turned out to be a favorite of ours from our tasting as well as the previously referred to Sweet Henrietta (nice hints of coffee and malt, and a lot more body than one might think for a 3.6% beer.)  However, all our brews were all pretty palatable affairs, from the Batch 60 Dubbel brewed with Date Sugar, to the orange bubble gum notes of their Batch 24 Quad, and finally another seasonal brew: a tart and bubbly Batch 63 Cranberry Weisse, given a little champagne tang from its Cabernet barrel aging.

With its taproom only during the weekends, Cleophus Quealy sports rotating food trucks, a setup similar to many Columbus-area breweries. The food menu we spied touted Canasta Kitchen's "Taco Happy Hour" on Fridays from 4-8 PM as well as a few bar snack items. And while one might think northward to the city of Berkeley to catch a bluegrass show, this brewery regularly hosts bluegrass and folk bands similar to Columbus' Rambling House Soda Pop. Alas, with this being the day after Christmas, there were no live acts in house that night, but we appreciated the bluegrass and folk tunes they played on their sound system that night.

Cleophus Quealy turned out to be a perfectly relaxing and tasty final destination in our stop-and-sample Saturday tour of the Bay Area.  And things only seem to be looking up for this brewery: being named after our visit by Thrillist as one of the 13 New SF Breweries You Need To Try Immediately (recent blogpost subject Mare Island Brewing in Vallejo was also named on this list.) We ended our day grabbing a couple bottles to take back to Ohio, including their Batch 47 Plum Saison and Batch 9 Apricot Golden. The latter bottle was the very last bottle the brewery had, and the folks at Cleophus Quealy were only too happy to give us a special "certificate of authenticity" denoting that fact. 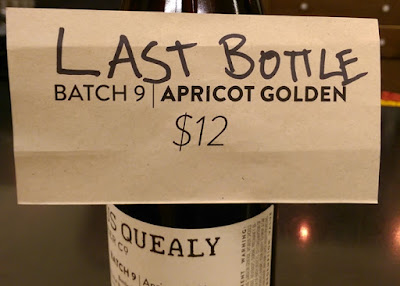