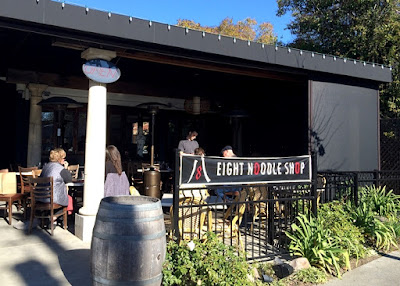 Generally speaking, the better ramen havens of the Bay Area lie to the south on the Peninsula, from San Mateo downward into San Jose, Napa is not really a place one would go to seek out this dish, but we found a pretty decent bowl just outside of the downtown area in the form of Eight Noodle Shop.

Opened by long-time area restaurant veteran and Taiwan-native David Lu (a man who we noticed is not afraid to engage his diners in the service department), this eatery offers up an outdoor patio space as well as a uniquely triangle-shaped and somewhat intimate wood-board paneled interior. The vibe inside is something similar to what we experience at Meshikou, a Columbus ramen eatery along Bethel Road in the city's Northwest side of town.

We decided to try out their $13.99 lunch special, which gives diners an opportunity to choose an appetizer, an entree and either an iced tea or pop from a select menu. As far as appetizers, the pulled pork steamed bun are similar in structure to what you would find from Columbus' Mashita Noodles, tender pork and sporting a nice blend of spicy and tangy. The Charred Edmame was also a pleasant (and plentiful) diversion as well, sporting a bit of salt and Chinese Five Spice and a slightly less chewy texture than the raw form. 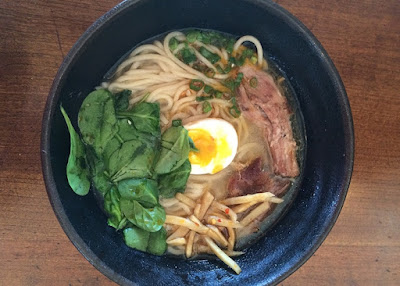 My spouse won out with the lunch deal entree choices. Her Pulled Pork Ramen (the dinner menu offers six versions, including a Salmon Ramen) was a good rendition with nicely chewy, made-in-house noodles and a good solid broth base. My Chicken and the Egg was basically a fancified version of a rice bowl (not too much unlike Columbus' Bibibop, or Bamboo Asia in the Financial District of San Francisco.)  The over easy egg and seasonal vegetables (including Brussels sprouts, something I had not previously encountered in such a bowl) added a bit of a twist to the concept, but overall this mildly tasty dish was just okay in my book. 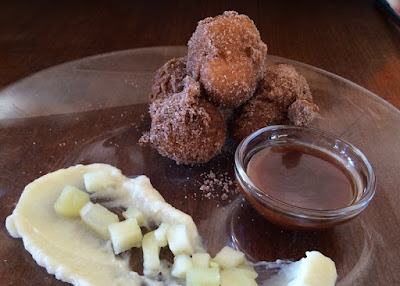 Perhaps the most memorable part of our meal came at the end, when we grabbed what sounded like the most intriguing option off the dessert menu. The Okinawan Donuts (Sata Andagi) were perfectly fried up to the same color as the caramel dipping sauce, right up but not quite crossing into the burnt category. These densely textured donuts (we thought of hush puppies as a comparison) were perfectly good on their own with a light sugar coating, but you just couldn't not dip them into the dipping sauce, with just a dab of yuzu curd and chopped apples. Some might consider it spendy ($7) for the portion size, but these were ragged chunks of fried dough were meant not as gut-busters but as finger foods to be savored.