I admit that I was late to the honey party. Basically, honey was a sweetener my parents never had around the house, and I never had any reason to seek it out for the first couple decades or so of my life.

However, eventually a life of overeating and lack of exercise started to catch up with me, and I finally decided it was time to do something about it. Interestingly, I became more discerning about what I put into my body, the universe of food items I considered on a regular basis expanded greatly. One of the many things I tried doing as often as possible was using honey as a sweetener versus refined sugars and artificial sweeteners.

I've learned that Ohio has its own share of very reliable honey producers; Honeyrun Farms and SaraBee Honey are a couple of the local honey producers which we have quite happily bought products from the Worthington Farmers Market, our personal favorite farmers market. But even then, it's not like we can't not go back to California and bring back our empty jars for refill to the place where we found our first whoa-moment honey ever. 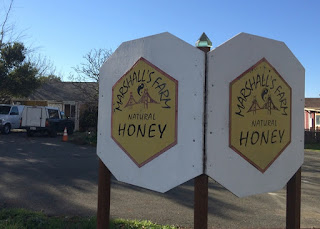 The location of Marshall's Farm Honey seems to make little sense to the first time visitor if you see what stands nearby. An elementary school, self-storage facility and a Little League playing fields surround the land on two sides, and it's impossible not to notice the busy Highway 29, the main road into the more sought after parts of Napa County. A large Walmart shopping center and newly constructed City Hall of American Canyon, the second largest town in Napa County with just over 20,000 people, also lie within stone's throwing distance.

Take it back 25 years ago or so to 1990, and it makes much more sense; back then, the surrounding town of American Canyon was an unincorporated bedroom community of around 7.000 people, with a cement plant, a smattering of light industrial businesses and plenty of undeveloped land, more than enough for Spencer Marshall, an Oregon native, and his San Francisco-born wife to set up their sweet business.

Marshall's sports presence at many of the area's farmers markets, and sells many of its products online. However, we've found it the most fun to simply drop by their facility and refill the small collection of jars I've accumulated ever since I discovered where their location was.

Upon driving onto the property, it's evident from viewing buildings such as the domed structure with seating and the "Honey Town Hall" (all located along the dirt path named the "Honeycomb Highway") that Marshall's can handle larger groups of people. The "Town Hall" building particularly holds plenty of honey-oriented paraphernalia, including a collection of both Marshall's products as well as honey products produced across the U.S. and the world. On most days, though, you'll see more resident ducks and cats wandering around than you will people; to find human help, you will need to go to the "Honey House".

There's nothing really pretty about the interior of the "Honey House". At the front of the space, another section full of Marshall's products is available, but as you go farther on, it becomes evident quickly that this isn't so much a display space as it is a working area. The unmistakable scent of honey unsurprisingly hangs heavy in the air. Honey processing equipment of all sorts and big metal containers of honey (all conveniently labeled and priced) similarly dominate the sight, arranged in an organized chaos that makes complete sense to one of Marshall's farm workers.

Help is generally quick to arrive (on our visits, a friendly fellow named Sergio helped us out) and then it is a matter of choosing what you want. Any of the products found in other areas of the facility are available for purchase, but my spouse and I have tended to go for freshly-filled or refilled jars of whatever honeys they have on hand.

In the past, we have bought and enjoyed quite a few of their numerous single-origin  (Eucalyptus, Orange Blossom and Star Thistle, among others) and regional varietals (Mount Tamalpais, Wine Country, and Blackberry.) Sadly, in one of our first visits together with my spouse, and with the intent of bringing back as many of their varietals back to Ohio with us, we took a smaller jar of an estate varietal that was significantly more expensive than the other honeys. This small jar of lightly-colored honey, made from hives stationed at the vineyards of sparkling wine producer Domaine Chandon, simply blew us away: the almost translucent gold color and taste made it seem like Marshall's had simply poured a bottle of sparkling wine into a vat of honey. In reality, this was really the wonderful work of honeybees, and the jar quickly went into ration mode, used only when we wanted to treat ourselves to something just a bit more special.

San Francisco Mead - while I covered our experience with the sister meadery of one of Columbus' favorite destinations in Brothers Drake in this post from last year, a tasting and a revisit were definitely worthy of an update post.

Since mead is definitely not a beverage that you typically chug down in large quantities, we aimed for a large gathering for our comparison tasting between the two sister meaderies, and my spouse's family's large gathering at Thanksgiving seemed to be the perfect opportunity.

The verdict really came down to what you liked: both versions reminded you of the ubiquitous dessert, were quite sweet, with a generally tongue-coating mouthfeel. Both were quite delicious, with your preference probably lying in your favored pie taste profile. Brothers Drake's Apple Pie was a very smooth, straightforward affair, while the San Francisco Mead's version had a little more bite, with hints of typical pie spices like nutmeg and cinnamon.

Intrigued by recent releases and the hope that a mead that we got to taste while still in fermentation last year (the blackberry, which promises to be awesome), we shot an e-mail to SF Mead to see if the blackberry would be ready by the time we got there for Christmas. Alas, we were told the blackberry was still a few weeks away from bottling, but we were encouraged to stop to sample their new offerings. Of course, we couldn't resist the opportunity.

If nothing else, the interior had been tidied up since the last time we were there, with equipment, tanks and other mead bottling supplies organized to make things easier-to-find. A hint of the meadery's Ohio roots lay off to the side in the form of OYO Barrels from Columbus-based distiller Middle West Spirits.

But perhaps the biggest and best change for us was the presence this day of owner/mead maker Oron Benary. During last year's visit, Benary and his wife Sarah were off tending to something much more important: the arrival of a brand new girl into their family. After introducing ourselves, Oron recognized us from my inquiry about the blackberry mead and proceeded to break out bottles of mead for tasting.

Our subsequent conversation was a relaxed affair, as we covered a lot of topics in the course of a half-hour or so. Perhaps the most interesting aspect of our chat was the controlled excitement Oron had about his meadery's future offerings, mainly because the Bay Area had so much unique terroir from which to draw his honeys for mead making. For me, it was almost like you could see the wheels inside his mind turning as he thought of the potential future varietals.

We thought we would be only grabbing a bottle of the Gravenstein Cyser (Sonoma's Gravenstein Apples are one of my most missed food products from the area), and our sampling of this dry and tart concoction only confirmed that purchase. However, Oron is also an engaging and quite persuasive talker, and the meads that followed only helped in that regard. After trying the California Gold again (a bottle of which continues to mature in our stash), we were quite pleased with how transformed what a dry yet buttery affair the Orange Blossom mead (a solid varietal we had sampled last year) had become when aged in chardonnay barrels. A smaller bottle of this mead was now unofficially added into our mental shopping cart.

And then Oron pulled out and opened up a bottle of what turned out to be the coup de grâce for this tasting: the Bourbon Barrel Apple Pie. The two Apple Pie meads we sampled at Thanksgiving were good, but oh, my. This luxuriant liquid was on a whole another level, and basically turned the purchase of now two bottles into three.

Oron closed out our visit with a sampling of some of the meadery's newly produced meads; similar to the Blackberry mead that now is close to bottling, these still-fermenting youngsters hold a ton of promise for something quite divine down the road.

The mead market is still an evolving market around the United States in general; folks living in the San Francisco Bay Area who are fond of or curious about the beverage could do far worse than to give San Francisco Mead's varietals a sip or two. For those folks in the Columbus area and/or fans of Brothers Drake, a journey down to this meadery is more than worth your while should you be traveling to the Bay Area.