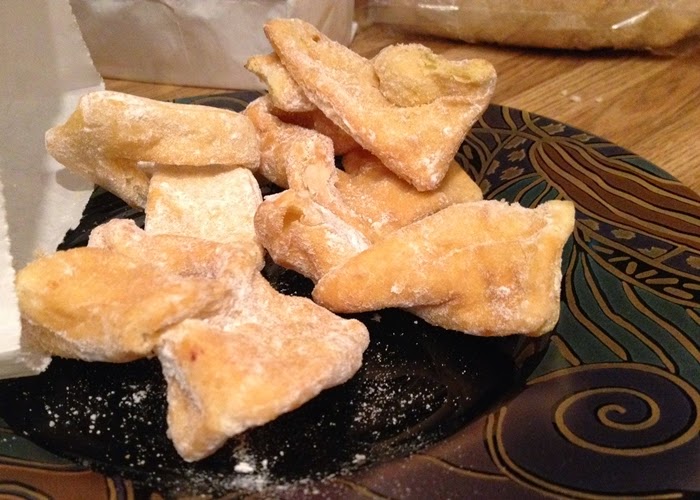 Alas, this picture of Kruschiki, a Polish cookie traditionally made around the holidays, is the lone picture of what we ate from Mazurek's Bakery. But these tasty treats explain a lot of why we made this side trip to this long-standing Buffalo, NY institution in the first place.

On the day we were ready to return with our parents back to Ohio, we had enough gas in the car to make it out of Canada (thank goodness, with gas prices in the area around $5 per gallon.) It would be simply a matter of two things: 1) where to fill up the tank and 2) where do we stop to snag a quick grab-and-go breakfast.

As far as 1) we were able to creak into Pennsylvania before being forced to fill up the car again. But in regard to 2), I have previously mentioned before that Mrs. 614orty-Niner has some Polish heritage on her side of the family, and had grown up eating and loving quite a few Polish dishes. So when I stumbled upon Mazurek's in my research, my interest perked up. It perked up even more when I saw one particular item advertised on their menu.

"Hey dear, do you know that they have Kruschiki?" I've learned that this cookie had been made by her great grandmother for the holidays as she was growing up, and mere thoughts of them bring back delicious flashbacks from those days for her. Central Ohio, alas, just isn't a place where you can find these specialties quite easily

"Really?!" She glanced through and confirmed what I was seeing, and responded back, "Well, you know where we're going tomorrow, right?"

Buffalo had at one time one of the larger Polish-American bases by percentage in the early 1920s (these days, they comprise about 13% of the city's population)) with Mazurek's opening up near this peak presence in 1933. Despite a change in ownership due to the Mazurek family's retirement from the business, the new owners have kept both the recipes and the building housing their original South Park Avenue location (save for some minor spiffing up) more or less the same. In addition, Mazurek's has recently expanded to a location in the downtown area at the Market Arcade as well.)

On this day, it was the original store we visited, and the smells that hit us as we entered this fairly tiny interior were amazing (it made my mouth water almost instantly). Mazurek's is your basic old-school bakery with an Eastern European/Polish bent. Breads, "ordinary" donuts (the Polish variety of donuts, Pączki, are offered only Thursdays through Saturdays), cookies by the pound, pies, sweet rolls, cakes - Mazurek's has these and much more despite its limited space.

Everything we bought for breakfast (my parents went with the Cinnamon Rolls, I went with Coconut Sweet Roll with their homemade icing, and my spouse's Cherry Turnover) was quite delicious, and was scarfed down pretty quickly. We also got to enjoy some excellent Vienna Bread (a very soft bread with a delicate texture and taste) and two bags of those precious Kruschiki.

My spouse was able to send one of those bags of these Polish bow-tie cookies up to some very pleasantly surprised family members in the more northwestern reaches of this state. Mazurek's can now claim to have put big smiles on the faces of people living in three distinct parts of Ohio and California in the span of three days. I'd say that's a job well done indeed.