Bagels and Locks (Pt. 2): The Welland Canal Lock 3 Centre and On The Front Cafe (Ontario, Canada)

The mighty Niagara Falls provides a huge roadblock to all forms of floating transport (save maybe for a random barrel or two) between the lakes of Erie and Ontario. Lesser known in the States than the Soo Locks, the 27-mile-long Welland Canal in Canada, with eight total boat locks, has acted as the main safe passageway for commercial boat traffic to negotiate the more than 300-foot-drop between these two lakes since its completion in 1829.

My dad is a veteran of the U.S. Navy, and we figured seeing ships up close again would be a fun experience for both him and my mom. Located a half-hour out of Niagara Falls, the Welland Canal Lock 3 Visitor Centre in St. Catharines provides visitors with an intimate view of the ship-raising and -lowering process through these locks via a viewing platform, similar to what we found at the Soo Locks. In addition, the Centre details the development of the canal and Great Lakes shipping in a similar fashion with various displays spread throughout the grounds.

The Lock 3 Centre has only one lock at this location (versus three at the Soo Locks facility); however, the speed by which boats are raised and lowered here at Lock 3 is much faster than its Soo counterpart. Interestingly, we found out later as we were about to leave that the operators of the facility were going to test-run a new anchoring system that would use powerful suction cups to steady a boat as it was raised and lowered. This system would lessen the need for rope anchoring and further lower the processing time for boats through this single-lock system.

This facility has a few more unique features that raises its attraction level for the typical visitor. The St. Catharines Museum is one of the better of its kind we've encountered, and it's not afraid to feature more lighthearted topics. At the time of our visit, these included a display detailing the favorite museum artifacts and memorabilia of various staff members, as well as a section featuring the beloved holiday movie "A Christmas Story." Filming for school-related scenes of the movie, detailing the quest of a young boy (played by Peter Billingsley) for a Red Rider BB gun as his Christmas gift, took place at Victoria Public School in St. Catharines.

These displays are balanced by those featuring more "serious" history of the city and the region, including one that gave the Canadian perspective on the War of 1812 between the British and the United States, as well as the Niagara region's role in the Underground Railroad and the role that the African-Canadian settlers played in the region.

Lest you think you got more than your money's worth (technically, everything here at the Centre and Museum is free, but a donation is suggested for those who actually enter the Museum itself,) visitors to this facility can discover the role that lacrosse has played in Canada and specifically the province of Ontario by dropping by the Ontario Lacrosse Hall of Fame and Museum at this same location. Even those absolutely unfamiliar with the sport can find enough here to perk their interest, including a display explaining the sport's origins as a Native American game (the sheer scope of their games are fascinating reading on their own) as well as a netted cage where visitors can try their hand at handling a lacrosse stick and scoring a goal. I gave it a shot myself and I can assure it is not an easy task.

As far as the "bagels" mentioned in the subject line, we found out based on our research that there doesn't seem to be much in Niagara Falls rising above the Starbucks level of coffee. Jonesing for something a little better on this morning, we ventured out to the quaint town of Thorold prior to our visit to the Lock 3 Centre to visit what looked to be a promising candidate for such, 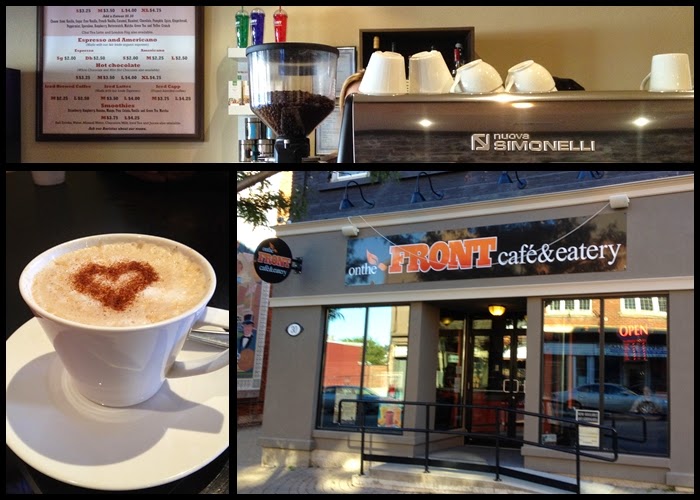 As we discovered, On The Front has a vibe something like a MoJoe Lounge or Cup O' Joe stores in Columbus, albeit on a smaller scale. The interior has a select space that invites you to hang out awhile, replete with comfy couches, a TV and a gas fireplace, as well as free wi-fi.

Their menu offers house-made pastries, a couple of hot breakfast items, fair-trade coffee ($1.50 for a small cup of joe to $4.50 for a large fancy drink; all prices listed CDN) and lunch sandwiches, five of which were created in consort with the culinary staff of Ravine Vineyard Winery in nearby St. Davids.

We all ordered coffee and a mix of either breakfast sandwiches ($3.50) and pastries ($2). No complaints - the food was solid, the coffee was tasty, and the staff at the store quite friendly and accommodating. If a place like this was in my neighborhood, I'd probably hang out here every so often myself.

As we were leaving, we noticed the business next door, The Pie Man, had a sandwich board with a list of pies of the day. A little post-trip research showed they had a rather interesting collection of both sweet and savory pies; perhaps a return trip to visit both places might be in order down the road.