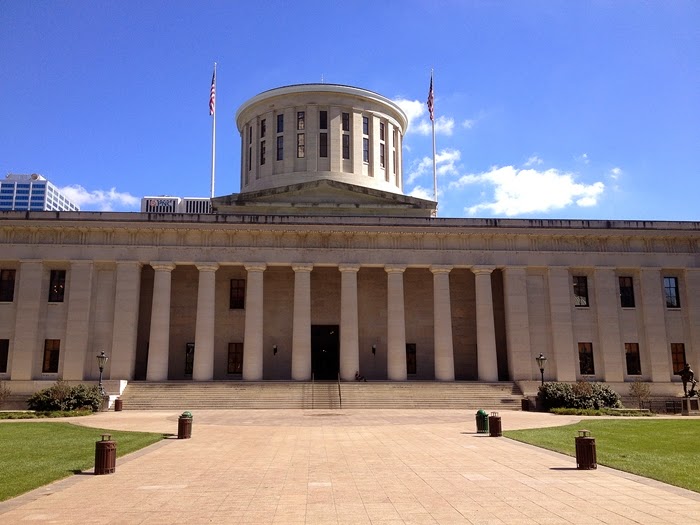 In my first ever drive through downtown Columbus back in 2007, one of the more eye-catching features I noticed was the Ohio Statehouse, or more specifically, the flattop dome on top of the building. I figured that, similar to Ohio's uniquely shaped state flag (a burgee, for those who did not know,) there would be a story behind it.

The Ohio Statehouse is probably a place people see or pass by thousands of times, but generally only visit on very select occasions. As a young student in Ohio, you may have made a field trip or two over to visit this seat of state government. Anyone interested in a particular state bill or political issue may have dropped by here to hear the chambers in session. And in our case, as a person hosting visitors from out-of-state (like my parents), you might pay a visit to it as a tourist attraction.

Visitors to the Statehouse have the option of two different self-guided tours (via cell phone or podcast; just bring the appropriate device) at their own pace, or a free guided tour of approximately 45-50 minutes. These tours are offered on weekdays tours offered on the hour from 10 AM - 3 PM when the Statehouse is open to the public. There's even an option for those who cannot make the trip out to the grounds in person via a virtual tour, which is available via a visit to the Statehouse's website. After-hours tours of the Statehouse can also be arranged in advanced for a fee.

We opted for the regular daily guided tour and we found out it's just not possible to cover all 10 acres of the Statehouse building grounds and cover every little nook and cranny. However, we did get a good sampling of both the highlights and lesser-known aspects of this building, such as its modern (for the time) heating system and its use of windows to maximize the use of sunlight for natural illumination. In addition, as a California resident for so long, I found it interesting that the road to determining Ohio's eventual capital city was pretty similar to California's path in terms of various cities holding that distinction before a final decision was made.

Other interesting factoids learned here included the use of prison labor to construct most of the building, as well as details on the stop made in Columbus by Abraham Lincoln's funeral procession (with this city being one of the last stops prior to arriving in Lincoln's hometown of Springfield, Illinois for burial, the body was not in terribly good shape as it was laid in state in the Rotunda area for mourners.

The following photos document some of the other more interesting details we encountered on our tour:

The Ohio Statehouse tour proved to be an informative and engaging look at what is obviously a prominent part of Ohio history. Having taken the same-style tour at California's house of government (as a tourist with my spouse,) I can safely say any Ohio visitors to the Golden State will get an equally intriguing look at the statehouse located in Sacramento.

And if you do pop over to visit California's capitol building, be sure to view all the paintings of past state governors. It is then when you can contemplate what it would be like to have, say, former Governor James Rhodes or current Governor John Kasich painted up in the same style as former (and current) Governor Jerry Brown did after his first terms in California's highest seat.