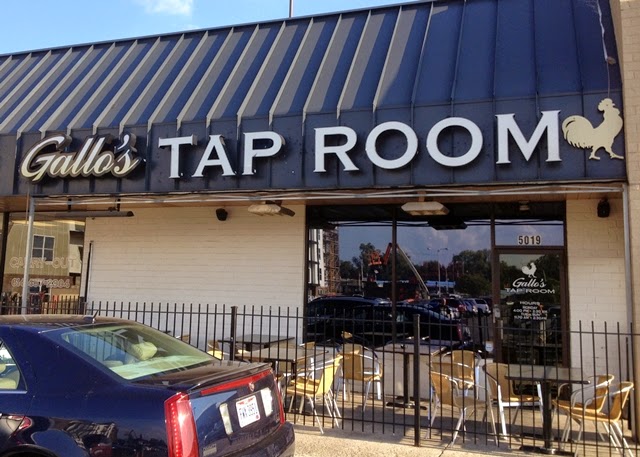 It's funny sometimes when a planted seed suddenly sprouts to life.

Gallo's Pit BBQ, formerly at the corner of Linworth and Dublin-Granville Road (a space now occupied by the much-talked-about Crafty Pint) had been one of our regular stops to grab some barbecue in the area. It was only when they closed around November 2013 that we found out about their relationship with Gallo's Tap Room located in the mall at Bethel and Olentangy River Roads.

"Okay, I didn't know that," we both kind of said to ourselves as we read of the barbecue joint's demise, and in a way that seemed we would never act on that information.

Or so it seemed: fast forward many months later when my spouse and I were looking for something to eat that would be relatively fast, but wasn't fast food, before engaging in an early evening drive to parts up north. The usual haunts were circulating in our minds but on this day didn't bring up the usual enthusiasm.

"Hey, what about Gallo's Tap Room, the place related to the barbecue place that closed?" my spouse piped-up from seemingly nowhere. 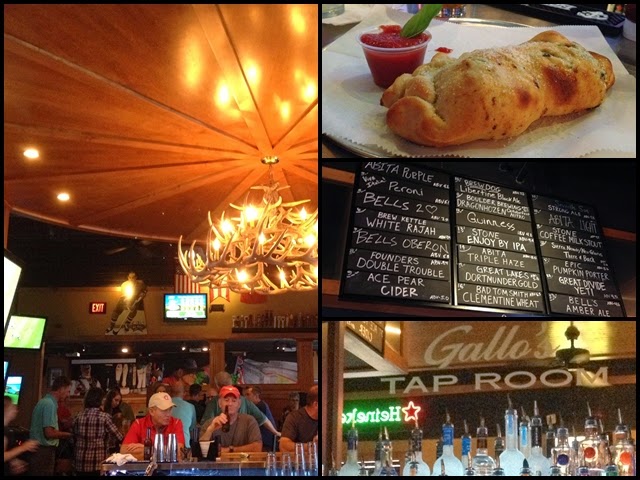 The 1970's-era exterior of this eatery, which is part of the Olentangy Plaza strip mall, might lead one to think of Gallo's as a bit of a dive; the ongoing construction of the nearby and nearly completed Taylor House Apartments (delayed from its original opening date by several months) hasn't helped. However, it was those very same apartments that led the owners of the Tap Room to close their Linworth location in order to concentrate on revamping the menu and expanding the space to handle the expected Taylor House resident traffic. Based on this first visit, those efforts have turned out quite well.

The interior is quite expansive, with plenty of seating and many of the usual bar trappings such as TV screens, jukebox and an area for pool tables, However, there are areas of coziness too such as the main bar area, leaving a customer a chance at privacy or group camaraderie except perhaps at the most jam-packed times.

Gallo's has a nice draft beer list that contained a smattering of Ohio breweries, including Bad Tom Smith from Cincinnati, Columbus' Seventh Son and Brew Kettle from Strongsville. My spouse went with Seventh Son's excellent Strong Ale followed by Bell's Two Hearted, one of her all time favorites. Looking for a lower ABV beer, I opted for a pint of the Sierra Nevada/New Glarus Beer Camp collaboration There And Back and was nicely surprised by how much better it was on tap than the bottled version I had sampled a couple weeks prior.

The Tap Room menu is along the line of a bar food menu with some slightly more novel items such as Pierogies ($7) and Mussels and Fries ($9.95) sharable appetizers, and Santorini ($10.50) and California Pear ($6.95) salads. I ended up ordering one of these slightly novel items this visit with their Big Easy Muffalatta ($8.25), which turned out to be a pretty decent version of the New Orleans classic sandwich.

Gallo's has rotating daily specials related to their bruschetta, portabello, pizza and calzone offerings, and my spouse ordered up the calzone this early evening. We were really pleased to say that this particular calzone ($7), filled with bacon, roasted red peppers, fresh herbs and roasted garlic, was plain and simply good, with a golden brown exterior, just the right amount of salt in the dough and a pleasing mix of flavors in the filling.

We noticed quite a lot of pizzas were being ordered both in-house and take out; our server informed us that they are a notch up in quality compared with the delivery-style pies that reside in the immediate area. The base model whole pie cheese pizza starts at $16.50; slices are also available for $2.50 and up. Based on our experience with the calzone, the pizza has made our "to be tried in the near future" inventory.

Gallo's Tap Room gives Taylor House residents a solid eatery within walking distance. But really, anyone driving near or living within earshot of Gallo's could do worse than to drop by their eatery and give them a tap or two.

2019 Update: an Instagram link has been added to the information below