Food Trucks to the Second Power: Challah and Ajumama

Continuing my double food truck posts, and with the season winding down for the year, here are two more mobile vendors who I have grown familiar with during my time here in the Buckeye state: 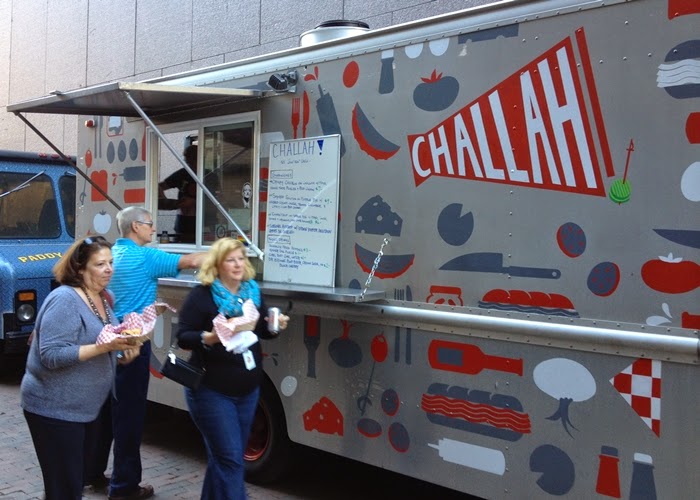 Challah: This food truck's offerings are advertised on their Facebook page as the owners' reinvention of the childhood Jewish comfort food they grew up with. Indeed, a glance of their typical menu offerings fit that motif perfectly, with items such as the Reuben Burger and their Potato Latkes.

My spouse and I have sampled their menu separtely at various locations around the metro area and have found all their offerings quite tasty. My spouse's favorite so far has been their Smoked Salmon Sandwich ($9), with nicely smoked fish topped with cucumbers, tomatoes and a pleasant herbed cream cheese spread. Meanwhile, Shoshi's Chicken Salad sandwich ($7) has turned out to be a personal favorite of mine, with a nice blend of herbs in a creamy chicken salad filling, topped off with red onions and pickles. 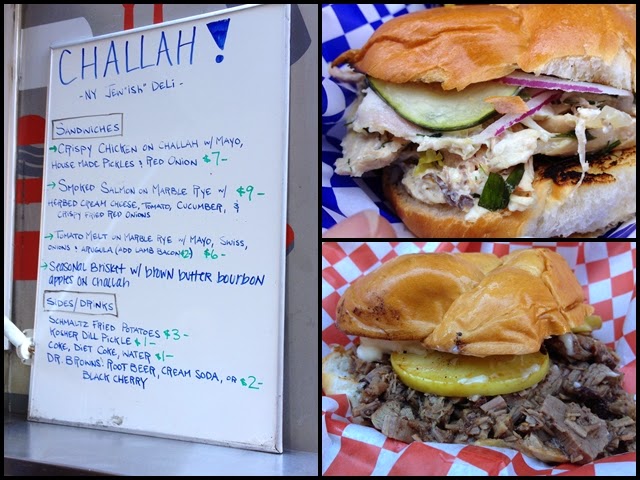 In addition, I found their just-released seasonal Beef Brisket Sandwich with Brown Bourbon Apples special ($9) quite delectable, with plenty of tender chunks of brisket and apples that is especially well-served by its soft challah roll.

Their new seasonal menu also includes their Matzo Ball Soup ($6; weather dependent), which might prove to be the perfect solution to battle the chilly temps. I think I just might have to test that notion sometime in the near future.

I must note one more informational thing before finishing: in our experience, Challah's main food items are generally on the saltier side of the ledger. This may be an issue for folks with salt-intake issues or whose palates are adverse to saltier food items. However, we have never had anything that's veered into the too-salty range for us, and we look forward to sampling more of this food truck's offerings down the road.

2019 Update: Challah!'s Catie Randazzo has been one busy gal, as she has now expanded her food truck offerings into a brick-and-mortar kitchen (Grandview's Woodland's Tavern.) In addition, her efforts with chef Matthew Heaggans has the Brewery District's Ambrose and Eve providing top-ranked comfort food classics. 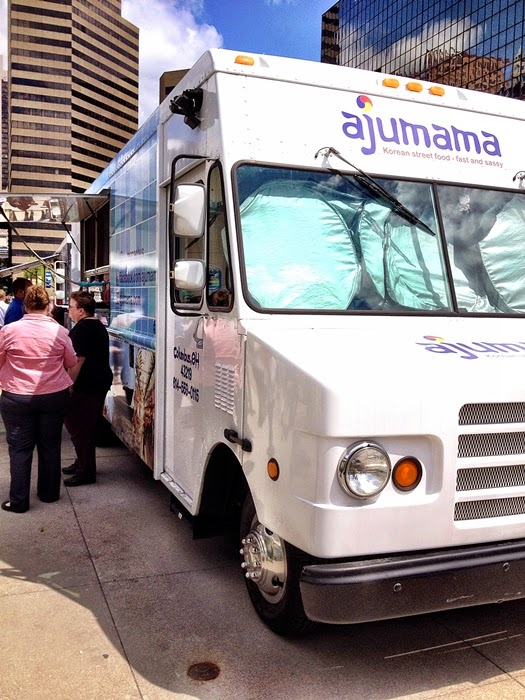 Ajumama: I have admitted in the past that, for no particularly good reason, I haven't really actively sought out Korean food, despite all the indications that say it would become a favorite of mine if I gave it a shot. Based on my first encounters with Ajumama's offerings, I may be getting my butt in gear in short order.

The first thing one might notice about this truck is the display of shiny trophies along side the order window. In Ajumama's case, they are a sign of the excellence this mobile food vendor has produced for local food truck customers since their debut as a food truck in 2012. In fact, a nice chronicle of Chef Laura Lee's hard work to perfect her offerings can be found at this series of posts over at the Seoul Eats website.


Ajumama's offerings line up with the popular Korean-American fusion theme started with food trucks like Kogi in Los Angeles. Unlike other similar trucks (I was familiar with the similar Seoul on Wheels back in San Francisco,) Ajumama has stayed away from the Mexican food motif and focused on Korean street food basics with some American-based twists, as in their very popular Bulgogi Cheesesteak Sandwiches ($8; Korean BBQ with "kimcheese" and onions on a hoagie roll) or a Kimchi Hot Dog ($6; served with spicy mayo, cucumber kimchi and a vegan or beef/pork hot dog from The Good Frank.) 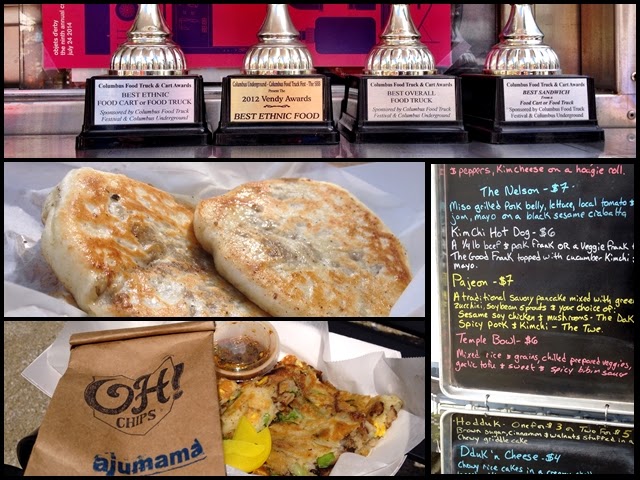 As tempted as I was by those, I was determined to try out the more distinctly Korean street food items on my first visits, all around some variations on the old reliable pancake. The Pajeon Dak, an egg-based pancake which reminded me a bit of my dad's Filipino egg-based beef and potato tortas. These beauties, filled with green onions, zucchini, soybean sprouts filled with sesame soy chicken with mushrooms, provided a unique and scrumptious blend of flavors that was accentuated well by the soy and vinegar dipping sauce. The bag of specially-blended OH! Korean BBQ flavored chips ($2) was also quite good, and I spent the rest of the day finishing off my bag.

On a return visit, I went with the Hodduk, which closely resembles a traditional breakfast pancake. Their Bulgogi Hodduk (2 for $7) reminded me of when I would wrap pancakes around my sausage links as a kid. Except in this case, the bulgogi was stuffed within the pancake itself, making this pleasantly savory item the bonus feature of being preeminently portable.

2019 Update: Instagram was added to the social media links below.