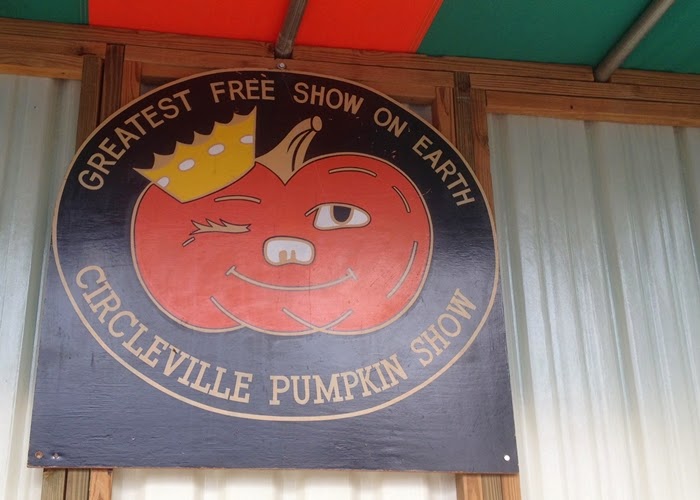 In my time here in the Buckeye State, I've quickly learned that Ohio is the land of festivals. Here in Columbus, you can get everything from cultural (Asian, Greek) to food/music (Jazz and Ribfest) to neighborhood-based (Grandview Digfest; the Moonlight Market, and the Short North's Gallery Hop) and everything in-between (Red White and Boom, Comfest and the Columbus Arts Festival.) And if you go beyond the metro region, you'll find seemingly hundreds more celebrations.

Pumpkin-related products from beer to baked-goods seemed to arrive a bit too early on the market for my tastes this year, and at first I mentally rebelled. Perhaps it was related to my hope (as it turned out, in vain) that a somewhat mild summer would hold for a bit longer. Alas, autumn came in and kicked summer to the curb, and after a short begrudging, my mindset shifted into that vibe. This meant I was more than ready to do my first ever wandering at the self-proclaimed "Greatest Free Show On Earth" - The Circleville Pumpkin Show.

Operating since 1903, The Circleville Pumpkin Show now stands as one of the world's largest pumpkin festivals in the United States, always being held starting on the third Wednesday of every October. The town population swells to approximately 8 times its normal size on each day of the festival, as approximately 100,000 people each day from all over the world visit during its four days of operation.

However, I did not read any of these factoids beforehand. As I had never been to a similar-styled event before (the San Francisco Bay Area has the Half Moon Bay Pumpkin Festival, but it was just a bit too far to drive from where I lived to give it a go), I preferred to go into this experience free of any expectations.

I reached Circleville on this cloudy day approximately thirty minutes after the announced start time of festivities that day, and immediately got a sense of the potential crowd. I noticed that some dirt spaces close to the highway off-ramps were starting to fill up with cars, and after a little hesitation, I went with my gut and grabbed a spot. It turned out to be a good move: on the walk back from downtown, the line of autos to get into the parking areas closest to the downtown area had slowed to a tepid trudge.

I don't what I was necessarily expecting size-wise, but I got a sense of how large a scope this event truly was as I walked around. This wasn't an event that covered a only couple of main streets in a sleepy small town; this was something that pretty much encircled the entire downtown Circleville area, with stands and other attractions on many of the side streets and alleyways. I ended up getting in much more of a walking workout than I ever would've figured to make sure I saw everything.

As I gathered in the scope of food options (of course, plenty of them were of the pumpkin variety, but there was plenty of carnival-style eats and a smattering of almost everything else), the arts and crafts collections, vendors, and the other assorted attractions (camel rides, autographs from Ohio State University Football alumni, music bands, etc.), it felt as if someone had airlifted entire county fairs from various locations in Ohio and plopped them onto downtown Circleville.

At this point, I think it's best to relate my day's experiences with a lot of pictures with a bit of select commentary.

After this first experience, I can see why the Circleville Pumpkin Show has evolved into the prime attraction that it has become. There's plenty here to entertain most anyone, especially a guy who's just in the mood to wander around for a couple hours with no real set plans.