You Can Rest Your Mind Assured: Stevie Wonder in Concert 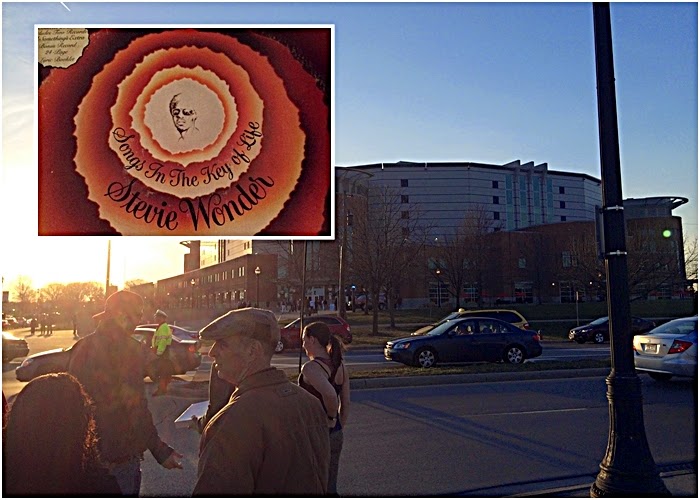 My second move to California as a young kid started the expansion of my music appreciation levels. Up until then, my only exposure to music was related directly to my parents' tastes, which ranged from 1950s and 1960s era crooners (Perry Como and Tom Jones, for example) and whatever pop-music 45s my parents came home with.

A move to San Francisco brought me into contact with my Auntie Max. In her teenage years at the time, my aunt was firmly into the soul/rhythm and blues artists of the time - Earth Wind & Fire, The Stylistics, and so on. It was music like I had never heard at first, and I admit it didn't appeal to me at first.

However, my auntie was often our family's babysitter. And she was older than me. Guess who got control of the stereo more often than not?  Slowly but surely, my appreciation for soul music developed from simple exposure to it and a growing desire to explore genres of all types.

Similar to my appreciation for R&B music as a whole, my full appreciation for Stevie Wonder's music grew over time. My first real exposure was to his music was the big hits off his Grammy Award winning double-album "Songs In The Key Of Life." I didn't get into his albums at all, until I heard groups like the Red Hot Chili Peppers singing Wonder's praises (via their sizzling cover of his "Higher Ground") and Coolio's reworking of Wonder's "Pastime Paradise" into the monster hit "Gangsta' Paradise."

As I have discovered, "Songs In The Key Of Life" is the culmination of an incredible streak of creativity for Wonder, starting with 1972's "Talking Book", followed by "Innervisions" and "Fulfillingness' First Finale." The album cover, where Wonder's appears to be a center of a blazing star, is perhaps symbolic of his talent going supernova on this work - 21 ambitious songs that touched on love, social injustice, musical icons, spirituality and everything in between.

For me, this was an album that needed repeat listening sessions to fully appreciate its myriad of offerings. Also, it is a special album for my spouse and I: music has been one of our ways to express our true affections for each other, and the song "As", a slow-building-until-it's-smoking paean to eternal love, is truly one our personal favorites of those tunes. It was my spouse indeed who surprised for our dating anniversary with tickets for this Stevie Wonder concert at the Schottenstein Center, the focus of which would be the songs of this double album.

The word "performance" was prominent in the concert title banner displayed on the big screen before the show started, and this was for good reason: Wonder brought a full orchestra of backing musicians and singers, including some locally-based musicians acting as the string section and famous-in-her-own-right R&B star India Arie acting as both foil and Wonder's featured guest singer on some of the album's songs. The group's combined talent shined throughout as they provided tight and melodic backup with occasional extended jam sessions on the album's songs.

Wonder did his part to give individual praise to members of his backup band through impromptu vocal chatter and instrumental doodling, but this attempt to share the praise, along with an unexpected delay in the concert's start time, made what promised to be a long night that much longer. Quite a few people were cutting out by the second set's final number (the transcendent funk jam "Another Star"), though it wasn't from a lack of energy by Wonder and his band mates.

I have never seen the now 64-year-old Wonder perform live before, but he came across as relaxed and energized, just happy to be performing and doing his best to unite people toward something better through his message and his music as opposed to dealing with his own personal travails; in fact, he joked freely about these events in his life throughout the concert. He also knew his crowd well, getting off several "O-H!" calls to the audience (the audience appropriately responded, of course.)

His more serious and heartfelt messages were well received by the audience, including his address to the gathered crowd before the start of the show where he stated an individual who practiced hate was simply "blocking their blessings" from God and their loved ones.

With the performances all so uniformly well done, in many ways it's hard to pick out show highlights. For us, the triple funk combo of "Contusion", "Sir Duke" and "I Wish" near the beginning got people out of their seats (the performance was so tight that it got my spouse, who freely acknowledges she is somewhat rhythmically challenged on the dance floor, to jump up and dance, and pulling me, the more dance-inclined one, out of my seat to join her.) Also, many of Wonder's more introspective songs such as "Joy Inside My Tears" and "Knocks Me Off My Feet" gained more gravity for me in the live setting than they did on the studio album. My spouse especially loved the powerfully performed "Pastime Paradise" as well as "If It's Magic." The latter song, which was dedicated to the original harpist on the song, Dorothy Ashby, saw Wonder on the verge of choking up at times.

The acoustics in the Schottenstein Center were sometimes an issue, swallowing some of the more subtle vocal phrasings at times as well as a lot of the kid-recited mutli-racial/gendered-American history lesson in Wonder's powerful "Black Man." It did enhance the power of the rhythm section, though; the seats pulsed from the bass and drums even in the upper reaches of the arena where we were sitting.

Despite the late running of the show, and Wonder's claim that they had to stop performing by 12 midnight, the assembled musicians performed a quick encore. Wonder adopted the moniker of "DJ Tick Tick Boom" and threw out a quick melody of random familiar tunes, starting off with Slick Rick's "Children's Story" and following with some of his more famous compositions ("Do I Do", "I Just Called To Say I Love You" and the always incredible "Superstition".)

This concert is not really for casual Stevie Wonder fan: as wonderful as the album "Songs In The Key Of Life" is in my opinion, it is an album that resembles a wine that is meant for aging. Only with repeated listening can you truly appreciate the breadth and creativity that went into this double-album, and those who aren't familiar with the lesser-known tunes could easily find themselves squirming in their seats.

However, if you're more of a connoisseur of Wonder's work, this show is like manna from heaven, and Wonder himself looks as if he has a few more concert tours left in him as he enters his golden years of life.