As horribly punny as that line is, it sets us up perfectly for detailing the next stop in our daylong Colorado craft beer tour. 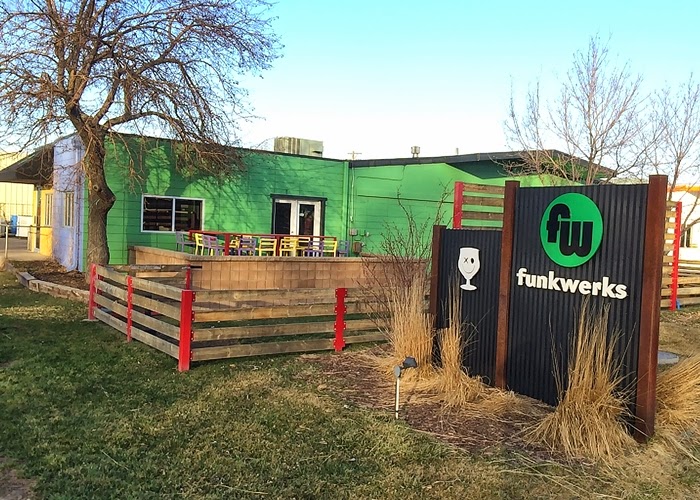 Funkwerks: Officially incorporated in 2009, the folks at Funkwerks seem to have a wry view on life and themselves. Hints of this are found all over, from their unique twist on the "About" section on their main website (where they make their various beer and business accomplishments and failures at various failures at various non-beer competitions almost indistinguishable from one another) to the taproom chalkboard, which not only lists the  "beertender" of the day, but also contains a quote or similar (the brewery's social media pages hashtag a regular #wednesdaywordsofwisdom.") Finally, the beer menu is filled with little shots of wit, using identifiers such as "Doesn't pair well with Ryu" (their Blanka Double Wit) and "0% of proceeds will go to NLRF, the National Leprechaun Reintroduction Foundation" (Funkwerks' Belgian Stout) with more standard beer descriptors.

However, there is nothing wry or to be laughed at with their selection of beer. Similar to Lancaster, Ohio-based Rockmill, Funkwerks has carved out a reputation of brewing some of the best of the Belgian and Saison beer styles in the country.

The brewery's taproom is a fairly cozy and quietly stylish affair, marked by wood paneling and floors, a little sheet metal, and a small bar area framed by their trademark shade of green you can find on their logo. Along with other tables and chairs, the interior can probably handle up to 20-25 people comfortably. Funkwerks doesn't have any regular food operations, but does offer a cheese and crackers plate if you need a little food while sipping their brews.

Funkwerks offers half and full glasses of their beers as well as two series of flights in their Funkwerks Flight ($9 for 5 samplers of their regular beers) and their Specialty Flight (5 of their more limited releases) for $2 more. We had thought about grabbing a flight each, but decided to play it safe by ordering the latter flight first; this turned out to be a good thing, as we received some very nicely-sized pours of some of what turned out to be their higher ABV offerings. They were all quite unique and excellent, with different taste profiles that made picking a best-of somewhat difficult. If we had to pick just one, we would probably to their Quad, with plenty of darker-fruit notes (plums and raisins) and a bit of chocolate before its nice crisp finish.

Thanks to our brother-in-law, we got to compare that with Funkwerks' Quad they had aged in bourbon barrels, which was delicious in its right with its hints of bourbon and vanilla. Since we were taking home some of their regular Tropic King, an imperial saison, we had to grab a pint of their Tropic King aged in peach whiskey barrels before we left. It was quite easy to see why Draft Magazine named this one of their Top 25 Beers of 2014 - this was definitely one of the more uniquely refreshing beers we have ever tried, something like a very fruity wine spritzer but with much, much more going on. I could imagine this being a perfect pour on a hot summer day, reclining on a shady patio while watching the sun go down. 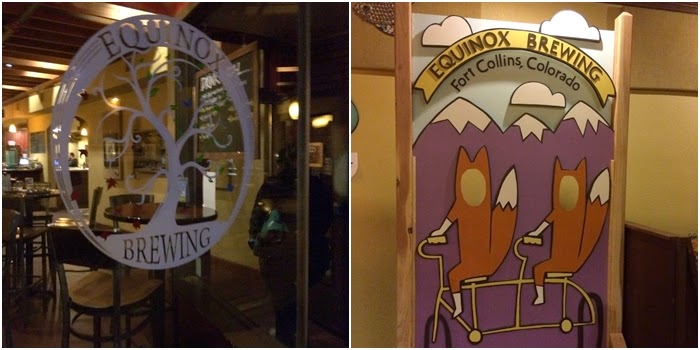 Equinox Brewing: In many ways, the last stop on any food or beverage tour is bound to suffer; as participants are often a little burned out by the end of the day. Equinox Brewing, which started operations in 2010 and is located somewhat off the main strip in downtown Fort Collins, actually provided a perfect atmosphere to ease down from our fairly epic beer touring day.

Equinox sports a very informal atmosphere, with distractions for the visitor such as a shuffleboard game, a little cutout board where you could make you and a friend into foxes riding a tandem bicycle, and a Biergarten patio that allows a view inside their brewing operations. The dimly lit interior of Equinox we found this night lent itself to what we exactly wanted to do before heading back home - grab a pint, find a table, and slowly wind down the evening with a little casual conversation. I spied several groups and couples that seemed to be taking that same approach as well.

With downtown Fort Collins within walking distance, plenty of lunch and dinner options are within easy walking distance; however, Equinox does have a small food menu with some mostly chip and dip style snack items.

The beers have a bit of a science and/or science-fiction factor attached their names (which appealed to our more geeky natures quite well); in some ways, the concept attached to beer was a factor as much as the beer style itself. My spouse couldn't resist getting a pint of the Space Ghost IPA, while all the stars I had seen in the night sky over Colorado made the Orion Irish Red my choice. Aftter the more complex taste profiles that Funkwerks' Belgian-style beers gave us, these more straightforward brews from Equinox were a perfect wind down.