Part 1 of our Boulder day trip can be read at this blog post link:

Of course, we couldn't not visit Boulder without sampling some of the city's eateries. Our experiences in this mountain town includes an eatery bringing a touch of South America to Colorado and a space that combines coffee, cheese and charcuterie. 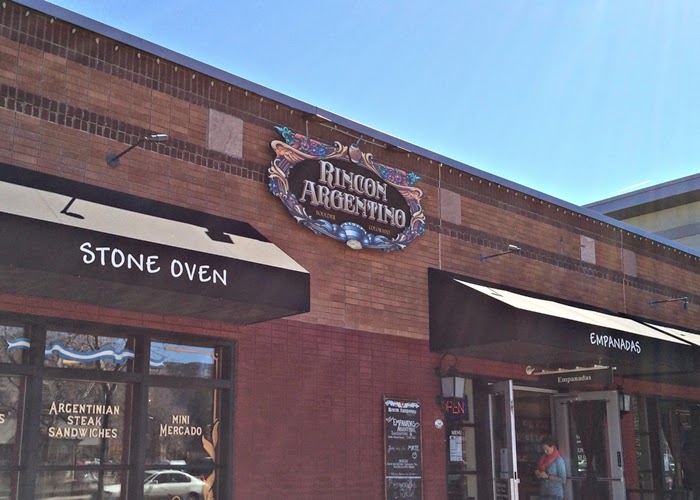 Rincon Argentino: Empanadas and all their hand pie cousins are something of an underrated culinary commodity. While the general concept (baked dough with some savory filling) is the same, the slight variations in preparation make cross-cultural and cross-border comparisons viable, not unlike another dough-related construct (the donut...or should that be beignet? Malasalada? Paczki?) Opened in 2012 in The Village shopping center, Rincon Argentino has been providing their country's version of these portable eats as well as other staples of Argentine cuisine to the residents of Boulder to much success.

Two things stood out as we made our way into the eatery and to the front counter to order. The first was a small chalkboard sign outside that invited folks to join them for mate; indeed, Rincon Argentino brings their country's tradition to the forefront, offering a "Mate Power Hour" every afternoon. Diners who partake in this ritual will get their of yerba mate tea served in a traditional gourd. For those not into mate, the usual fizzy beverages are available as well as select Colorado craft beer taps (on our visit, beer selections from Upslope, Odell and Avery were on draft.)

The second was the main chalkboard, detailing not only their numerous empanada varieties but also other Argentine specialties such as their milanesa (basically, a breaded and fried protein of some sort) and lomito (steak) sandwiches.

As tasty as the sandwiches sounded, we were here this day for the empanadas. We decided to order a swath of these pockets of deliciousness and were not disappointed; out of the six, the standouts were the two spicy steak (Carne Picante) and ground beef (Criollo) empanadas as well as their wild mushroom (Hongos). The two accompanying green and red sauces both had a nice kick to them; it was fun figuring out which sauce went best with each empanada variety. For locals, packs of frozen empanadas are available for taking out and preparing in their own home.

We did not indulge in any desserts during our stay, but it wasn't like we weren't tempted. This eatery has tubs of "Super Dulce De Leche" ice cream in the freezer case, as well as a delicious Pasta Frola tart (made with quince paste.)

As we sat down, we noticed a shrine to various Argentine athletes across all sports. Being Boulder, it was cool to see the race bib of an Argentine triathlete on the wall, as well as one of the first names I became familiar with when I started paying attention to the sport of tennis (Guillermo Vilas.) However, it was not surprising to see most of the display devoted to soccer and Argentine legends Diego Maradona and Lionel Messi.

Boxcar Coffee Roasters/Cured: We were here actually to visit Boxcar Coffee, based on a tip from some of the folks who work at Columbus' own One Line Coffee. What we discovered upon arrival was that their Boulder-based space (their home city; they also have a location in Denver proper)  was co-shared with Cured, a local provider of cheese, charcuterie and a lot more.

On one side of the space, Boxcar Coffee brews their coffees. Opened up in 2011, Boxcar specializes in small batch single-origin bean roasting, using a German-manufactured machine built around 1930. They also have adapted their preparation of coffee to account for the lower water boiling temperatures caused by their city's altitude and the requisite lower atmosphere pressures that result. As stated on their website, their "Boilermakr" is inspired by traditional so-called "cowboy coffee" preparation and allows maximum extraction from every brewed cup.

Boxcar's baristas know how to make a visual impression, attired in a dapper combination of long sleeve shirts, vests and dress pants. The staff was also as accommodating as they were nattily dressed - they were happy to oblige my spouse's off-the-menu request for a cafe au lait, Meanwhile, with the warm day ahead, I was in the mood for something iced and went with their latte. Both drinks were well made and quite tasty.

Similar to One Line Coffee, Boxcar's coffee and tea menu is fairly select, with a selection of single-origin brews, basic espresso drinks and teas along with a selection of pastries and other sweets. They even have a cold brew that they bottle in the form of their "Bottlerocket."

Meanwhile, it is Cured which occupies most of the interior of this co-shared space (both business share a guest seating area.) Cured's main focus lies in its cheese (I spied a few familiars in their cheese case, including Cowgirl Creamery and Oregon's Rogue Creamery) and charcuterie, with the usuals like coppa, chorizo, pancetta and lardo available for purchase.

However, they also offer a pretty decent selection of gourmet food products, freshly baked breads and pretzels and variety of wines to the visitor. They also provide lunch-time eats, with a daily menu of various sandwiches and a couple of sampler cheese plate options. If you are inclined to grab something for an outdoor outing, Cured offers partially-customizable picnic platters that will feed various-sized groups.

While we did not indulge in any Cured's wares on this visit (lunch today would be at the previously mentioned Rincon Argentino), we liked and were tempted at times by the plentiful culinary eye candy they provided. In a way, the space was something like cramming Columbus' North Market vendors Stauf's, Brezel, Curds & Whey, Omega Artisan Baking and The Barrel & Bottle into a space roughly the size of where Hot Chicken Takeover now resides.