Driving through the very suburban city of Aurora, Colorado, the word "diversity" would not normally pop into your mind. The housing developments (sans the mountain ridges in the distance) aren't too dissimilar to those in the outer burbs in this area such as Gahanna, Reynoldsburg or even Dublin.

However, this outside facade hides the fact that this city of just under 350,000 is one of the more diverse populations in the state. As noted in this Denver Post article, Aurora is the first major city in the state of Colorado to be minority-majority in population, according to the latest Census figures. The City of Aurora is trying to use this fact to its advantage in various ways, including the culinary diversity found within its limits. Prior to our visit last month, I located a fairly comprehensive ethnic eateries guide produced by and located on the website of the city highlighting this very fact.

Indeed, our culinary encounters within the city displayed this diversity to full effect in that they were all the products of immigrants to this country trying to make good, a tale oft told but never seems to get old.

The Donut House - The story of the Dieyleh family will sound awfully familiar to fans of Columbus donut institution Buckeye Donuts. Similar to Buckeye Donuts owner Jimmy Barouxis' tale, Moe Dieyleh currently holds the head baker position of The Donut House, a business his father Omar opened in 2009. Omar, who still is very much involved with daily operations, immigrated from Jordan to Colorado over 30 years ago, integrated and established ties with the surrounding community, and learned the craft by working several years at a local Winchell's Donuts prior to opening up his store. Those ties the Dieyleh family built up over the years, as well as Omar's incredibly welcoming and friendly personality, have helped transform the store into a locally beloved institution.

There's nothing fancy about The Donut House, from its non-descript exterior to its simple but cheerfully painted interior. While there are some unique items you can find here (such as some pre-packaged Middle-Eastern sweets such as baklava and namoura, a cake made from semolina with rose and orange blossom water) the main focus here lies in that revered combo of donuts and coffee.

We stopped here twice for quick bites on the go. Our first time, we had a small sampling of their donuts: texture-wise, while their cake donut was nice enough, the true standout is their standard donuts. These fulfilling creations reminded me of a slightly toothier version of the big airy constructs that Columbus' Destination Donuts puts out.

The Donut House has looked to upgrade their coffee, and has taken steps to upgrade their beans (they now source local coffee roaster Shiva) and their equipment with the addition of an espresso machine. Can't vouch for prior, but the coffee we received was a notch above diner-level coffee.

On this first visit, we noticed some delectable-looking fritters that we couldn't justify based on our schedule that day. We rectified this on the day we left town when we grabbed a couple fritters and coffee to take on the road. As good as the donuts were, we discovered that the fritters might actually be just a little bit better.

Sunburst Grill - While there were many places that my spouse and I would've loved to have visited during our stay, my brother-in-law's family kept both of us very well fed. Still, we did have one day to ourselves, and some childhood bias crept in here as we decided to have dinner at Aurora's lone Filipino restaurant, which started operations in 2008.

Though the home cooking almost always won out, I was blessed to have numerous Filipino restaurants nearby and within the cities where I resided in the San Francisco Bay Area. Sunburst Grill really isn't all too different from many of those restaurants, lying in a non-descript strip mall and sporting touches of the Philippines within its interior. Unlike those restaurants, however, Sunburst Grill is more in the traditional sit down and order style restaurant versus the more common "turo turo" (literally, "point point") buffet style of eatery I was used to.

Sunburst Grill's menu has a very select inventory of Filipino dishes, including standards such as lumpia and pancit along with a couple items I had not encountered before. I knew I must have been too long starved for the cuisine when I decided, despite my distinct indifference to seafood in general, ordered their Inihaw na Tilapia, a grilled tilapia fish stuffed with tomatoes and onions, along with a swath of other items which we figured would be a probably a bit too much food but easily transportable for later consumption.

Of these items, the Lechon Kawali (fried pork belly) and Lumpiang Shanghai (Filipino egg rolls) by far were our favorites. The former was fried up perfectly the perfect crispy exterior and a fatty, juicy interior; it came accompanied by a tasty lechon sarsa (a liver-based sauce) and a side of Adobo Kangkong (one of the items I was unfamiliar with), essentially vegetables cooked Filipino adobo style. The latter proved to be a huge portion of lumpia, more suitable for a party of four, but that didn't stop us from chowing them all down.

The tilapia reminded me why this fish is something I never cared for much, due to its rather bland taste. Coupled with the presence of numerous pin bones, it would be a hard sell for most non-Filipino customers. Still, it was like being at home and I got into the simple fish preparation as the meal went on. The Pancit Canton, which is essentially a variation of Chinese Chow Mein, also reminded me of something you would find in an American-styled Chinese Restaurant versus what I was used to growing up. I'm sure most people would find it perfectly tasty, though.

Service was earnest to the point of almost being TOO helpful at times; there were several visits to our table to confirm the details or give an up-to-the-minute status of our order. I think I got the hint why this might be standard procedure as we got through our meal; a couple of groups of diners who came after us who weren't too familiar with Filipino cuisine were given detailed explanations and occasional reassurances when menu items were explained.

We could not NOT leave this place without some Filipino dessert; since the halo halo (what looked to be a towering version came out for a neighboring table while we were there) was not really an option, we went with their Leche Flan to take back to my brother-in-law's place for later consumption. This version was nicely thick, with a sweet carmelly sauce that brought some fond memories of my mom's version from when I was a child. 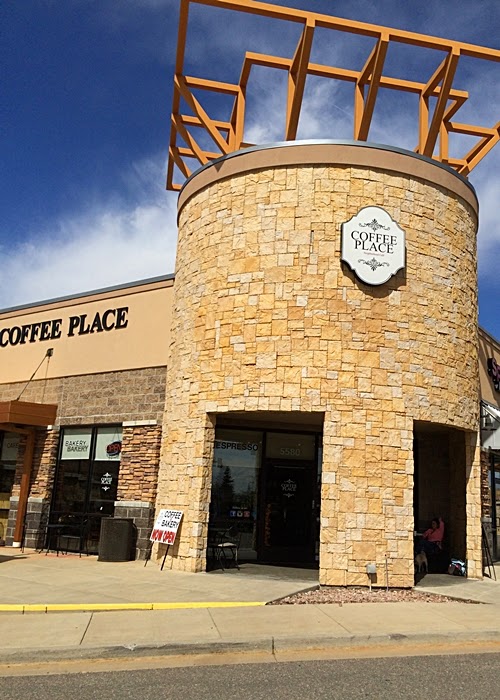 Coffee Place Cafe - This was meant as a quick stop over for some iced coffee caffeination the day after a St. Patrick's Day party, but based on my brief experience here, I think more exploration is in order on a return trip. The business' simple name and somewhat hidden location, camouflaged inside a modern-styled strip mall along a major north-south highway with numerous such commercial developments, doesn't exactly scream promising at first glance, but I quickly saw that initial impressions can be deceiving.

The first thing that caught my eye was the eraser board touting "Fresh Bureks", a big hint that this wasn't quite the usual run-of-the-mill cafe. Thse cheese-filled bureks are the creation of chef Katerina Larden, a Latvian native who immigrated to the U.S. via Tel Aviv along with her husband Nisso and children. These bureks along with other European-styled baked goodies provide the backbone of Coffee Place's food menu, along with a selection of soups and paninis sandwiches for lunch.

The next thing that caught my eye was the iced coffee flavors - along with the usual Torani-syrup variations like vanilla and hazelnut, an intriguing option appeared at the very end of the list. Silan, or date honey,consists basically of boiled down dates and is a common Middle East condiment used in all manner of food preparations. I most certainly had never seen it as a coffee flavoring option.

I passed (regrettably) on the bureks and stuck with the iced latte drinks, one with silan and the other maple flavored. My spouse found the date honey a bit too strong for her tastes and opted for the maple iced latte, which turned out nicely reminiscent of Cafe Brioso's similar creation. On the other hand, I enjoyed the unique flavor profile that the silan had provided; the date syrup had turned the surrounding iced latte closer to mocha colored as it slowly absorbed into the surrounding liquid.