All Signs Point to High (Pt. 1) - Diners, Drive-Ins and Drives

Growing up, Dairy Queen has never been one of my favorite fast food joints - in fact, I always like to joke that the worst burgers I ever had were from a DQ (they were so bad, it made me crave the elementary school cafeteria burgers with the "Hot 'N Tasty" adorned foil wrappers.) However, an old-school neon sign can induce anyone to warm up to a place, and the one that adorns the front of Worthington's location (the building itself dates back to 1955) certainly does the trick.

When I posted a picture of the sign, I asked folks if they could remember other memorable signs along this main thoroughfare of Columbus. A few folks chimed in, and I was a bit flummoxed that I couldn't think of many more than I did during my post. I really haven't stopped thinking about it since, so on a recent slow, nothing-better-to-do day, I drove the roughly 16-mile-stretch of north-south aligned High Street from one end of the I-270 Beltway to the other to see what I could find. 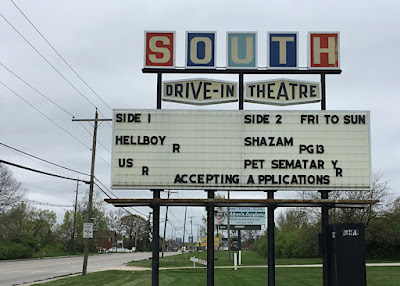 Out of Frank Yassenoff's mini-empire of drive-in theatres, the South Drive-In Theatre (built in 1950) is the lone survivor; in fact, it is the lone remaining active drive-in within Columbus city limits.  While the drive-in does still show movies, the South may be best known now for its Flea Market, which is held three times per week during the warmer months of the season. 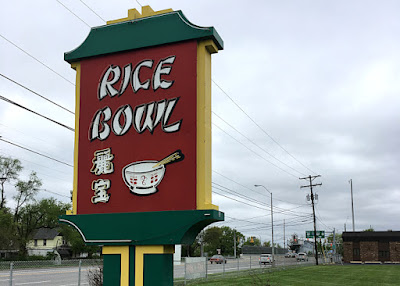 I've always thought the neon sign which belonged to the Rice Bowl Restaurant was worthy of display within a place like Cincinnati's American Sign Museum. As it stands, The Rice Bowl, which enters its 60th year of operation in 2019, continues to serve up its American-Chinese dishes to diners on the south side of town. 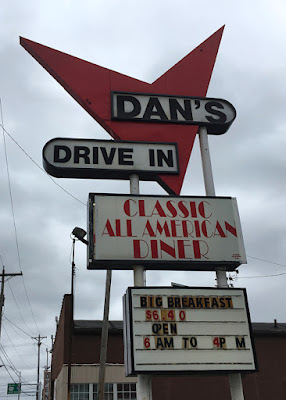 Perhaps of all the spots visited on this journey, the exterior of Dan's Drive-In Diner screams 1950s the most. Indeed, this diner, opened by Dan Manes and now operated by Nick Bergados, opened its doors in the downtown area in 1951 and moved later in the decade southward to its current digs. 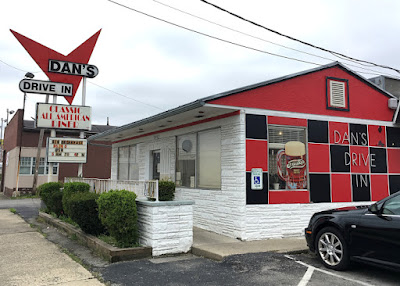 Did you know that Columbus' Merion Village had a robust bluegrass music scene going in the 1950s and 1960s? (For a fun little snippet of that history, check out this segment from WOSU's excellent "Columbus Neighborhoods" series.) The Bluegrass Music Shop, run by John Barriga since the 1980s, operates out of a residential building which dates back to 1909. 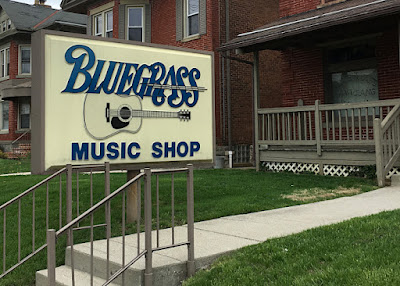 Across the street from Bluegrass lies the city's lesser-known Buckeye Donuts. Formerly partners with the campus-located version, this Buckeye Donuts offers sweet yeasty fried dough goodness to the city's south-siders.  The sign for the south side location has seen better days, but it's really the donuts that you come here for, right? 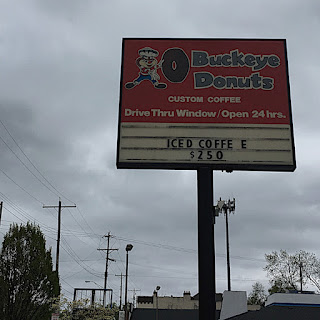 One of the oldest continually operating businesses encountered on this jaunt, The Peanut Shoppe Columbus has roasted its nutty and sweet treats to Columbus natives for over 80 years.  Their location on the corner of High and State Streets is relatively new for the business, but the Mr. Peanut neon sign outside should remain a classic sight for visitors to the downtown core for years to come. 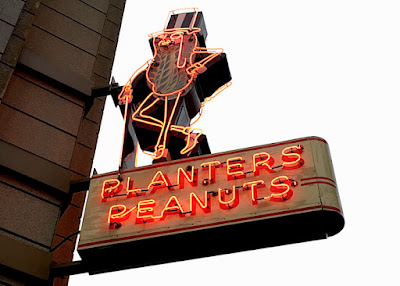 Peek down State Street towards the Scioto River and Ho-Toy's distinctive neon sign will grace your view. Opening in 1959, Ho-Toy took over what had been a former Burger King location in 1980 and is one of tiny number of Asian restaurants within the downtown core.  For a rundown on what you might expect, check out the thoughts of my colleague CMH Gourmand on his 2018 blogpost. 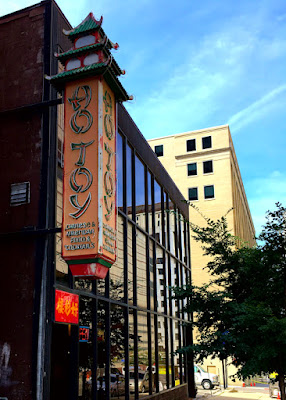 The Columbus Dispatch Newspaper has nearly 150 years of operation reporting the happenings in and around Central Ohio. Their offices are currently located on Broad Street (the main east-west residential street through the city), but their iconic sign, still perched on their old quarters on Third Street, can be still seen from High. 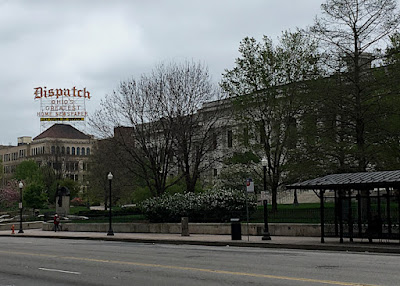 The view overhead at Lynn Alley and High Streets has always intrigued me: the sign related to the Big Apple Restaurant seems somewhat vintage, but I suspect the business it relates to (which is no longer in existence) is not. I can't find any definitive information online or in other resource books (like the "Lost Restaurants of Columbus/Ohio" series) to confirm either way, however.  Currently, Olivers on Lynn Alley operates the space, which replaced Thai Lotus in 2014. 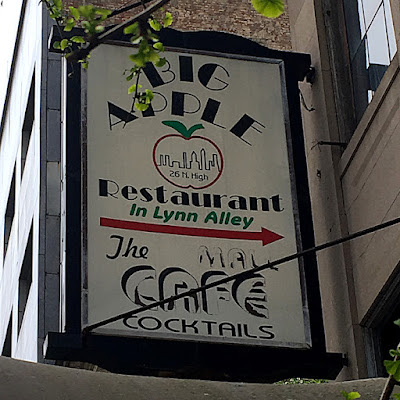 In the Short North, perhaps the most iconic sign resides in front of the Fireproof Building, which started construction in 1906 and operated for decades as a hub for warehousing and moving services. Later in the century, the focus shifted to business records storage until the owners decided to redevelop the building into a mixed-use residential and commercial property around 2010. 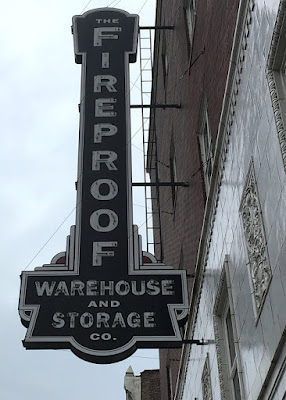 The similarly shaped sign for the Hubbard Grille is nowhere near as old as the Fireproof Building (both the sign and restaurant are roughly a decade old), but it does pay homage to the sign which once resided outside of the Winders Motor Sales Company, which sold cars from the space for half-a-century. The building, which opened to the public in 1924, cost approximately $25,000 and was considered a state-of-the-art showroom in its day. 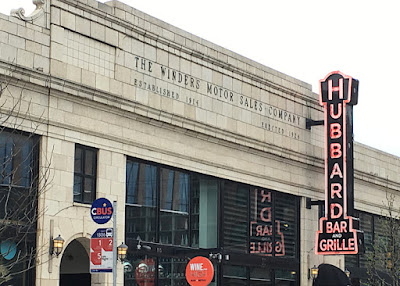 The northern half of the Short North neighborhood ends Part 1 of our High Street neighborhood. The iconic sign associated with Michael's Goody Boy Diner (which underwent a recent ownership change to Corso Ventures, owner of other area eateries like Forno, Standard Hall, and the Short North Pint House) lights up the night on the east side of high. Michael's first served its American-styled favorites to the public beginning in 1947. 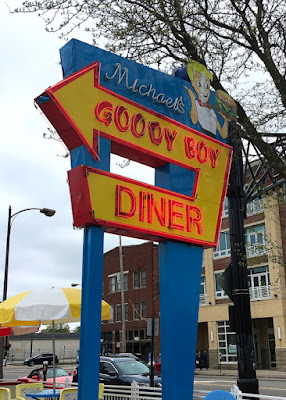 Cross the street, and you can get a taste of the local music scene in Skully's Music-Diner and its neighbor Magnolia Thunderpussy. Operating for over 25 years, Skully's has operated as a bar-and-grill and later live music venue in several locations along High Street.

Meanwhile, Magnolia Thunderpussy's origin actually can be traced to East Lansing and Michigan State: initial intentions were to set up an outlet near the largest universities of the day.  However, the Columbus outlet outlasted its Spartan-based counterpart and remains strongly in the groove for a fifty-year anniversary celebration in 2020. 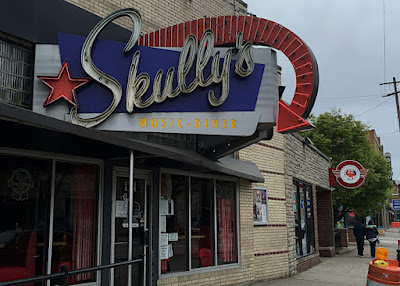 Part 2 of our series will be posted next week...stay tuned!
Posted by Joe