It's Easy To Trace The Trucks of My Cheers

Last July, I wrote a series of blogposts examining Columbus's tendency to vote national restaurant chains in at the top in various local-media-sponsored "Best Of" polling events. One of the earlier polls in the cycle is the version hosted by Columbus Alive, which I found fared well in terms of local restaurant representation compared to other local media brethren. I thought it would be worth a look to see how the recently released 2019 edition fared compared to 2018.

Similarly, the splitting of the Indian/Nepalese category into two separate categories (a reflection of the continued growth of the latter) proved to be a positive change, as well as the addition of the African Restaurant category. The promotion of this latter, very under-the-radar segment I feel is vital in lifting Columbus's culinary profile to never-before-seen heights.

With that said, I'd like to offer another tweak that would improve the poll further. By my informal count of food trucks registered at Street Food Finder and the Central Ohio Food Truck Association website, there are over 160+ mobile operations offering everything from the basics (pizza, ice cream, sandwiches) to the more eclectic (Bunny Chow, Bulgogi Cheesesteaks, Ropa Vieja, and Pierogies.) And this does not even include the several dozen traditional taco trucks that generally hold court in the farther reaches of the metro.

So why not break out the "Best Food Truck" category into sub-categories like, say, "Best Overall Food Truck", "Best Traditional Taco Truck", and "Best Sweets/Dessert Food Truck"? Several food categories in the Alive poll already have nowhere near as many participants ("Best Coffeehouse", "Best Ice Cream" and "Best Donuts" come to mind) and adding extra categories here will, similar to the dismantling of the generic Asian category, offer the reader a better picture of this area's mobile food scene. 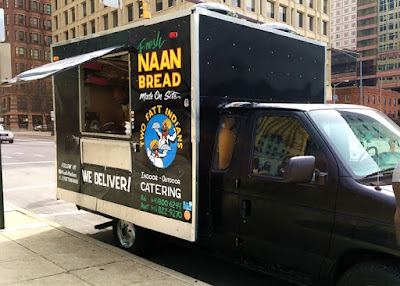 Speaking of food trucks, those increased numbers of trucks and businesses that host regular food truck rotations have made Columbus a more or less year round mobile food proposition. While inclement weather still does play a huge factor, I have come to appreciate those willing to brave the colder temps like the Capital Ramen Food Truck (a steaming bowl of ramen is a perfect portable antidote for winter.)

A good spicy curry or vindaloo isn't too bad at warming the soul either. I've always wondered why there aren't more Indian food trucks roaming Columbus's streets, and I've been looking for a replacement of sorts for Horn OK Please, which had an appealing selection of Indian-inspired wraps and finger foods. It turns out the menu of the Two Fatt Indians food truck, which has recently appeared on the scene, is something of the total opposite. 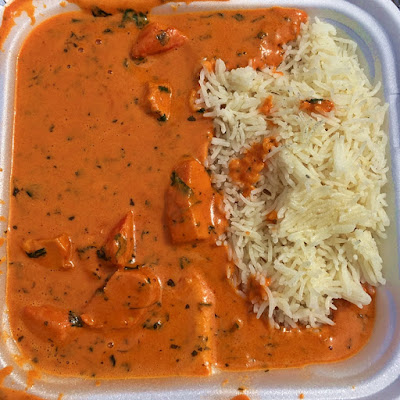 Two Fatt Indians offers up a menu that rivals one you'd find at your local corner Indian joint, with jalfrezi, vindaloo, tikka masalas, biryanis, and Naan bread. It was so extensive (for a food truck, anyway), I felt compelled to ask, "You can order all of these, right?" (I got an assured nod yes from the gentlemen running the truck.)  And this isn't ladle-from-the-pot, previously prepared curries and the like either: once ordered, dishes are prepped over a hot stove in a pan as spicy (or not) as you'd like, resulting a bit of a wait for your food (but not too much so during my visits.)

The food quality so far appears to be up there with the brick-and-mortars as well.  The curries were more richly textured and complex in flavors, and the proteins within were ample.  Their homemade Naan Bread is not your typical tandoori-fired, crispy Millennium Falcon oval, but closer to a softer flat bread. Not traditional perhaps, but it is perfect for sopping up the sauce. and there is plenty to be had, even if you let the accompanying Biryani rice soak up its share.

The only drawback, from a food truck perspective anyway, is you are paying brick-and-mortar range prices. There's no skimping on the portion sizes, so $20 would earn you and a partner a pretty tasty restaurant-style dish big enough for splitting plus a couple of Naan breads. Or you can always save some for the next day's lunch, which was the case with my Lamb Vindaloo order. 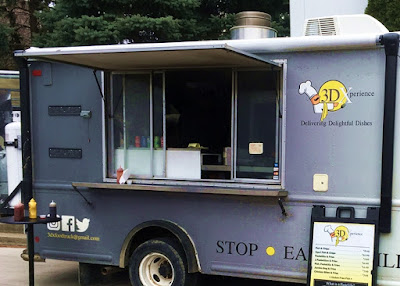 On the opposite end of the spectrum (menu size-wise) is the 3DX Food Truck.  Yes, there are a couple combos that most kids will dig, but the menu really centers on their two featured stars in the Fried Fish Fillets and Pastelillos, with crinkle fries acting as the faithful sidekick. 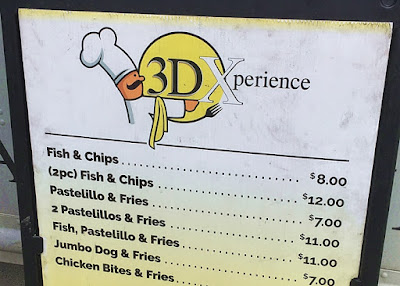 In a way, I felt bad for the Pastelillo - this hearty Puerto Rican-styled turnover filled with ground beef and cheese was satisfying fare on its own (adding in one of the hot sauces gives it a welcome boost), but it just paled in comparison to the fried fish, which I ordered in the all-encompassing Fish, Pastelillo and Fries combo. 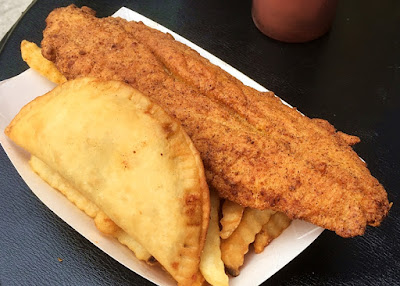 This fried fish is one of the best versions I've had in awhile: perfectly fried and not at all greasy, with a lovely, batter that is crispy but not crumbly, and steamy, flaky fish meat underneath. You could sprinkle one of the two varieties of vinegar-based hot sauces (both of which have something to recommend them) onto the fish, but in this case, I didn't need the additional adornment. It's also a meal in itself - the Single Fish and Chips option in my mind would stuff a vast majority of diners.