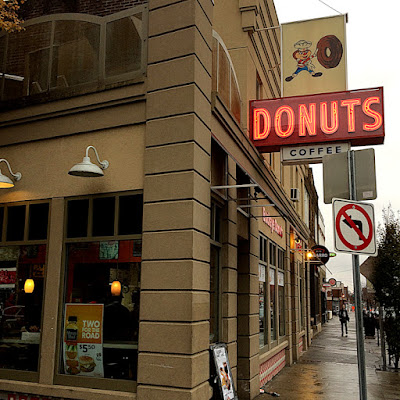 Part 2 of our trip up High Street (Part 1 can be accessed at this link) gets us to the campus area, where the march of progress has transformed this once character-laden section of street with generic suburban-styled functionality. However, one of the few holdouts is thankfully both an institution with both students and locals alike in Buckeye Donuts, which turns 50 years old this year. Jimmy Barouxis' shop of sweet and savory treats, open 24/7 for your dining pleasure, looks to be around (cross fingers) for at least fifty more years. 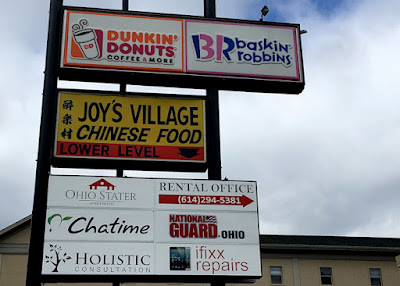 One of these signs is not like the other: Joy's Village Chinese Food lies somewhat hidden away on the lower floor of an otherwise non-distinctive Ohio Stater retail and restaurant complex. Yes, they have the Americanized familiars, but you can more traditional items like Congee, Hot Pot, and various Tofu dishes. Joy's has been serving diners for over forty years, and their sign looks like it could be just as old. 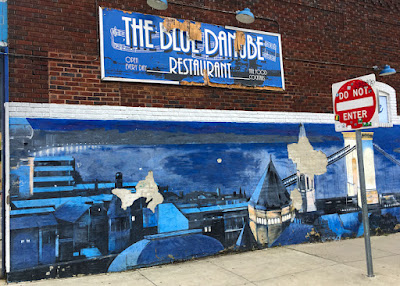 The Blue Danube had three distinct phases in its nearly 80 years of existence, starting off as a fine-dining restaurant specializing in European cuisine, then changing into a Greek-focused eatery in the 1940s. Its final iteration is the one that most locals relate with and will miss - a place known for cheap eats and an atmosphere that both old-timers and hipsters could appreciate. The "Dube", as it came to be known by regulars, fell victim to an ownership dispute and closed in May 2018; any hopes of a revival seem to have been deep-sixed in the months since. 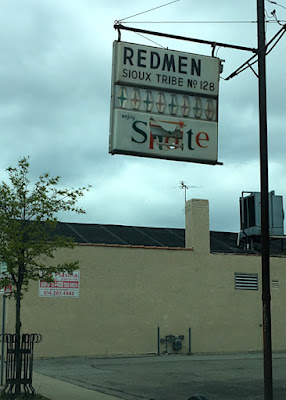 This mysterious sign relates to a nowadays somewhat obscure fraternal organization in the Improved Order of Red Men, and its Columbus-located chapter. Dating back to before the Revolutionary War, the IORM's origins lie in the Sons of Liberty, who used the structure of the Iroquois Confederacy "to help establish freedom and liberty in the early Colonies", per their website. The organization, which at its peak had nearly half-a-million members, still exists today, continuing to borrow Native American terms and customs in its organizational units, and morphing into a group whose main focus promotes patriotic and love-of-this-country ideals. 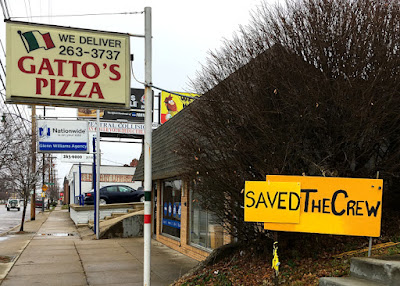 Two signs of vastly different ages and distinctions: Gatto's Pizza is by some calculations the oldest pizzeria in town, in terms of continually operating at the same location in Clintonville in 1952.  Long a cash-only affair, Gatto's now accepts credit cards, according to a taped-up notice on the window. Other than that, not much has changed at this family-run business.

Right next door, the appropriately colored "#SaveTheCrew" sign was planted not too long after former Columbus Crew owner Anthony Precourt announced that he would be moving one of the founding teams of Major League Soccer club to Austin, Texas in October, 2017. The groundswell of resources and community support to keep the team in town eventually proved too powerful to ignore, leading to an ownership change (Jimmy Haslam of the Cleveland Browns purchased the team in December 2018 to keep them here) and proof that sports fans can win these battles every once in awhile. Shortly after the team's purchase, the sign was changed to signify victory. 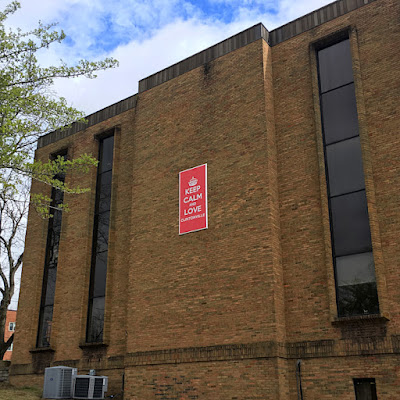 This somewhat innocent and fun sign is far from vintage, but has created a bit of a kerfluffle in Columbus's Clintonville neighborhood at 4041 North High Street. According to city code, this sign, put up by building owner Metropolitan Partners and a riff on safety poster put out by the British during World War II, is technically two square feet too big, as detailed in this ThisWeekNews.com article. When taken in from wide shot like above, it's hard to figure out (in my mind) how that extra square footage really matters all that much, but then again, this is a neighborhood that had a big to-do over a kangaroo crossing sign that ended happily for the sign in question. 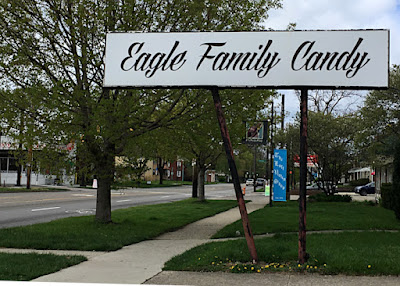 Entering October last year, everything seemed to be hunky dory with Eagle Family Candy, a business which opened in Columbus in 1912 and moved to Clintonville in 1946.  Much of the candy is produced with longtime family recipes and vintage candy-making equipment.

However, a Facebook post posted during that month from Dee Dee Eagle detailed the possibility that redevelopment would scuttle the business unless funds were raised to acquire the space. Apparently, the Go Fund Me fundraiser and subsequent support from the community has done the trick, and Eagle continues to produce its Buckeyes, Brittles, and other chocolate treats for local sweet seekers. 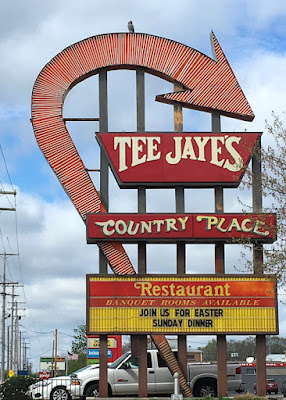 Back in the day, this towering neon sign belonged to Jerry's Drive-In, which opened in 1960 and for a couple decades was the home of carhops, car rallies, and in-car dining, in an area which through the decades has seen its share of city-wide heated debate as to whether Bethel Road and Rathbone Avenue/Morse Road would be merged into a unified east-west thoroughfare.

As it turns out, the connector never came to be and, theoretically, Jerry's moving arrow neon sign will never come to an end either, as per the wishes of former owner Mary Miller, with Sunshine Chicken and now Tee Jaye's Country Place operating in the space now. One notable addition to the sign since its old days: the addition of a decently convincing mock owl on top. 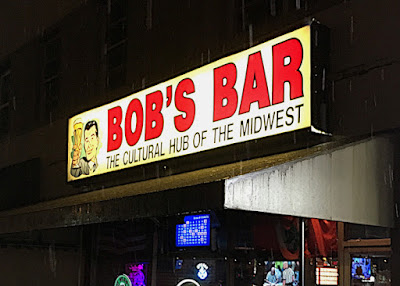 The sign for Bob's Bar is one of the smallest in this collection and resides in what looks like your average late 1970s non-descript strip mall, but don't be fooled - it sports one of the best craft beer selections in the city. Much of this is due to the changes owners Chris and Mike Beck when they took over the space at the turn of the millennium, upgrading the taps well before craft beer became a thing and earning it kudos from national media sources like USA Today. 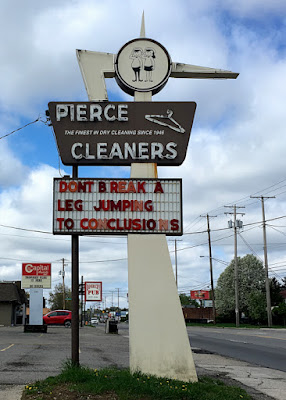 Finally, we end with Pierce Cleaners, which has been offering "The Finest in Dry Cleaning Since 1946." The business sports a sign that has seen better days, but the sign is in its prime in terms of pun power.  Every two to three weeks, a new witticism greets drivers who saunter northbound on High Street by the business, which lies close to the Worthington-Columbus border.

The reverse side will occasionally throw in a second pun-laced saying, but often flashes a message of support for the local sports teams. Typically it's related to the exploits of the Ohio State Buckeyes, but currently the sign is fully behind the Columbus Blue Jackets and their first legitimate run at something greater in National Hockey League's playoffs.
Posted by Joe