This year's family Black Friday Libations Tour would prove different from previous years' versions. During our last three excursions, we explored areas that were all fairly established from a craft beer perspective.  This was not the case this year; in fact, if you were immersed in the developing Columbus area craft beer scene from roughly 2012 to 2014, you’d have a good approximation of where the area we explored, Toledo and the surrounding areas reside at the moment craft beer-wise.

In fact, one can easily argue that this historical home for the 419 area code easily qualifies as the last large region in Ohio that is really ripe for a craft beer boom. And it's not like this area hasn't had a prominent brewing presence: Toledo's prime location next to Lake Erie and the Maumee River allowed pre-Prohibition breweries like the original Buckeye Brewing, Finlay, Maumee, and Huebner-Toledo to thrive.

Having some time to absorb the whole experience, I went with a more nuanced look on this blogpost at the four breweries we visited to try to paint a picture of where the 419 craft beer scene stands now, and where it could go.  Not that we didn't find any great beer during our travels (one of the best beers my wife and I have had this year was drank on this tour), but the scene's best days are most decidedly geared toward the future.

The Newcomer: Beer-wise, newcomer Patron Saints Brewery (which opened in late July) turned out to be the least enjoyed overall by our group. I had thought about not mentioning them in this blogpost, but a Toledo Blade article I read after our visit shed some light for me on why their brews possibly weren't all they could be. As detailed in the article, firewall issues with their small industrial space in West Toledo forced nano-brewery owners Aaron Grizaniuk and Eric Pfohl to brew outdoors (a far less controllable environment) in order to receive permission to open. 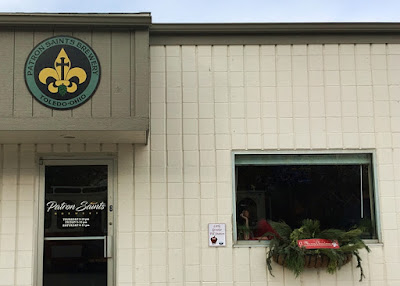 Another potential factor is sheer demand: the Blade article notes that business has been brisk since their opening. Combine that with a fairly ambitious number of brews (12 total, all bequeathed with actual or punny (e.g. their Saint Swiny, a bacon red ale) patron saint names) for a nano-brewery, and one can see how consistency from batch to batch might suffer. 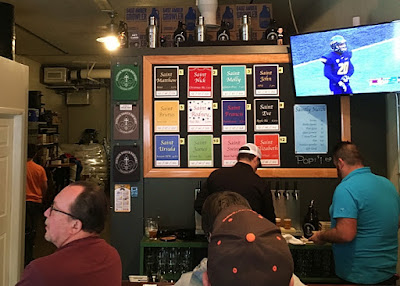 But their way of doing business is hardly something for me to decide. As it stands, the folks at Patron Saints are riding a wave of pent-up demand - their arrival gave Toledo proper four brewery-associated taprooms and five breweries (Perrysburg's Great Black Swamp brews out of Toledo as well)) - as well as enthusiasm (the list of acknowledged supporters posted inside the taproom was impressive number-wise.) I personally found their cozy taproom a fun, friendly and low-key place to have a brew and watch some sporting events. Also, their overriding theme is as perfect for the city as any, with both the owners' and the city's Catholic heritage. 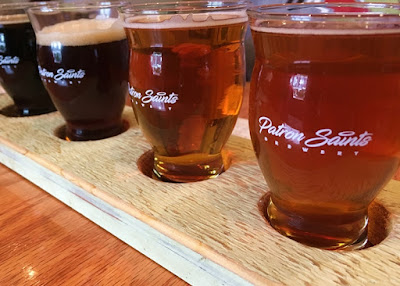 In many ways, Patron Saints' current path parallels a number of Columbus-area breweries established earlier this decade such as Sideswipe (whose original brewery/taproom space provides the closest match to their Toledo brethren,) Seventh Son, and North High whose beers we both considered initially fairly average and occasionally inconsistent. However, all three have worked out the kinks and now put out beers that are both fairly consistent and more than worth seeking out. Will Patron Saints end up cementing a place as a prime spot on the newly created 419 Ale Trail? There may not be a specific patron saint for second chances, but I’m willing to give them one here.

The Established: If your business can survive disastrous fires and floods and come back stronger than ever, I would say your entity qualifies as established.  This designation certainly applies to Findlay Brewing, which was originally founded in 2013. 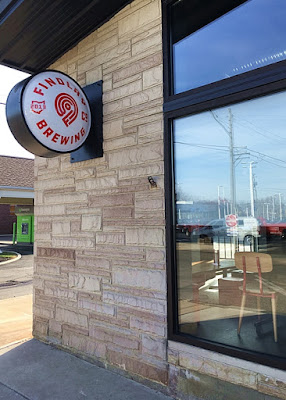 Findlay Brewing's new taproom and kitchen, which opened two-and-a-half years after a fire ravaged their original location in January 2016, has an interesting history (the former police gun range) and a familiar but welcoming blend of modern and warehouse elements. For my spouse and I, the interior reminded us especially of Little Miami Brewing in the Cincinnati area. with an in-house kitchen, ample seating, and garage doors that open up into an outdoor beer garden area, or even another 419-area brewery in Maria Steins' Moeller Brew Barn. 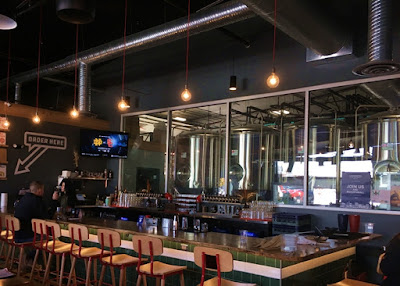 With the new space, Findlay increased their brewing capacity by more than sevenfold; on the day of our visit, we were greeted with twenty four taps of mostly in-house brews, plus a few Ohio guest taps featuring Toledo's Earnest Brewing and Columbus Brewing, which recently expanded distribution up to this part of the state . As it turns out, Findlay's brews cover the gamut and generally rate as solid, competent brews that pair up well with their menu of enjoyable brewpub standards like flatbreads, burgers and charcuterie. 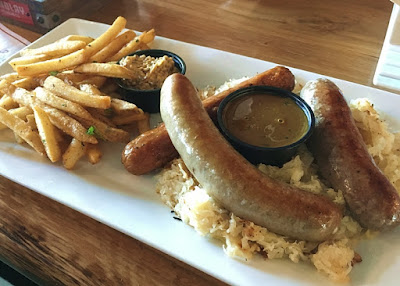 From what I've read, Findlay Brewing rates as a community staple, and based on population could easily remain Findlay's main outlet for craft beer (the city's population mirrors other cities with a single brewery like Grove City, Westerville, Dublin, and Fairfield) for years to come.


The Audacious: Port Clinton's Twin Oast wasn't new for us (see our previous blogpost here), but it was the first time for the rest of our party to lay eyes on this architecturally bold arrival onto the 419 scene. On our previous visit, my spouse and I wondered how the brewery would hold up during the low season; based on the crowd that had gathered on Black Friday, the visitor count seems to be holding its own. 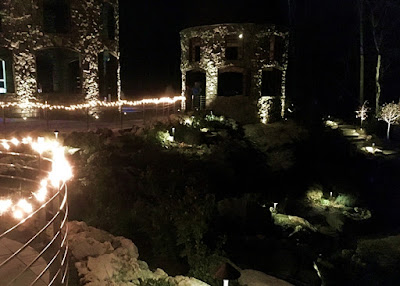 We saw a few new changes from our last visit, including a couple new beers on tap and four-packs of select brews available for carryout. In an area of the brewery we hadn't spied on our last visit, a catered reception was on the verge of starting. But in general, the same ratio exists - Twin Oast matches up an audacious space with a kitchen featuring upscale pub fare and reasonably tasty beers that gently challenge the palate. 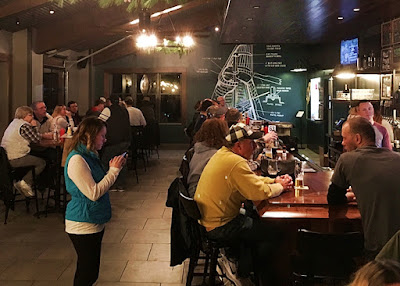 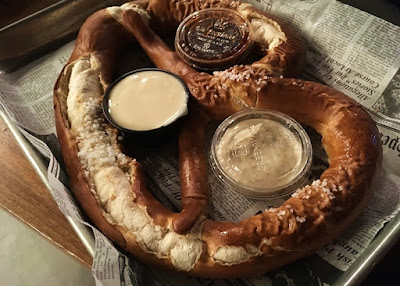 Twin Oast has reversed the general flow here - quality beer over a lengthy period of time creates the momentum and the funding for showcase brewery facility. While Columbus doesn't really have an example of this phenomenon, one need only look at established breweries like Stone, Sierra Nevada, and most recently, Russian River, which have built eye-catching facilities that enchant the visitor with both atmosphere and in some ways enhance the enjoyment of the brews themselves.

Twin Oast's dazzling space is certainly an attraction on its own, but its going to be the beer that keeps them coming in. I acknowledge that the brewery will have to cater to the tourist crowd during the high season to prosper (not unlike Buckeye Lake Brewing in Licking County) but I'm personally hoping the brewery's farm-related assets and their "farm-to-fermenter" philosophy leads to seeing some bolder brews on tap when 2019 comes around.

The Adventurous: Compared to Patron Saints, one could say the opposite problem (a somewhat sparse selection of beer) exists for our final brewery. But if one looks more closely, one realizes that comes with the territory with the small batch brews of Nicholas Scott and Wild Side Brewing. 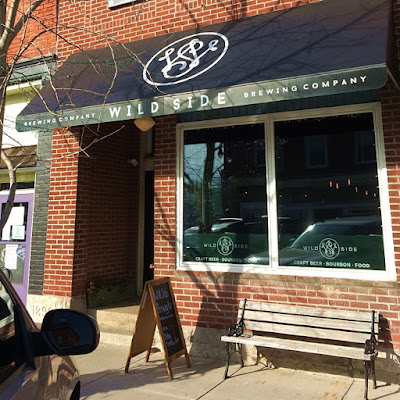 A successful drive to get the public to join the brewery's "Syndicate" club in summer of 2017 allowed Scott to open a taproom in Grand Rapids earlier this year. This village of roughly 1,000 people, perched along the banks of the Maumee River, is very much an anomaly in Northwest Ohio with its numerous arts and crafts boutiques, cafes, and upscale antique stores. It is an environment that really seems to suit Wild Side Brewing, whose somewhat narrow but very functional brick-walled interior opened up its doors earlier this year. 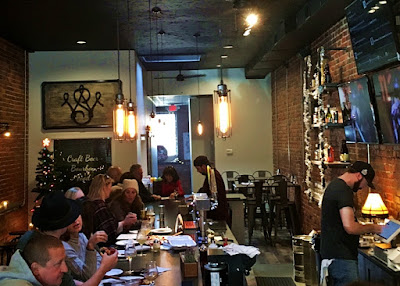 One of Ohio's more unique breweries, Wild Side uses selectively acquired barrels, locally sourced ingredients and native wild yeasts that surround Scott's residence to produce their sour and farmhouse ale brews. Columbus was the home base for awhile for this concept via the Native Funk project of Spruce Campbells Brewing; perhaps a more familiar purveyor to most is Austin, Texas-based Jester King. Perhaps unsurprisingly (but still a nice surprise), one tap of Jester King beer was available to taproom visitors, along with a few brews from Athens' Jackie O's and the always lovely Big Bad Baptist from Epic Brewing. 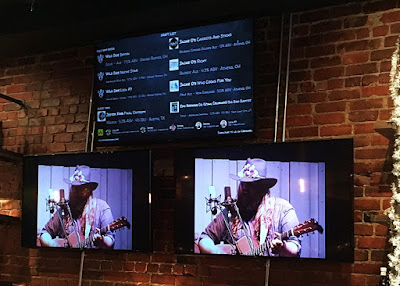 The taproom also features newly opened kitchen (featuring unique items like plates of gourmet bacon and wild game sausage as well as Detroit-style Pizza) as well as a nice selection of whiskeys, but obviously we were here for the beer. The universal winner here, as well as our entire trip, was the unfiltered Brynn, which was not unlike drinking a liquid version of the most delicious sour cherry pie you've ever eaten and easily one of the best beers we've had all year. 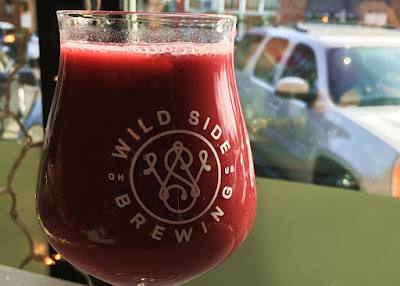 In terms of future prospects, Wild Side's somewhat isolated location makes it a bit of a haul for many, but it has brought a nice addition of night life for local residents, so that bodes well for the taproom. Anyone from outside the area who loves the sour side of the stein should consider their Grand Rapids taproom a must visit.