Columbus Pizza-politan Adventures: Near the Banks of the O-Hi-O

Well, there are some changes that are due to my pizza map, including a new location of Harvest Pizzeria in Grandview, the closure of Nidovi Pizza in Dublin, a new Gionino's Pizza in Pickerington, and the impending move of OH Pizza and Brew into the old Stack'd space in Downtown.  When the latter happens, I'll make those changes.

As for the November segment of my Columbus Pizza-politan Adventures, we look out to the (near) east to two franchises which have roots close to the state's namesake river, including perhaps one of the more divisive regional pizza styles around. 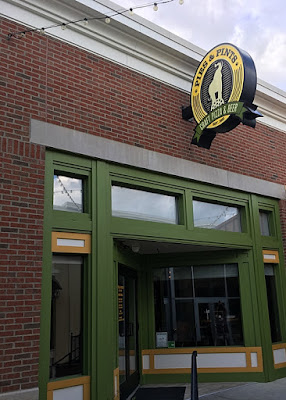 Company History - A relative newcomer to the pizza world, Pies & Pints started up in Fayetteville, WV, in 2003 by Kim Shingledecker and David Bailey. In an interesting side note, Shingledecker, who was raised in the Cincinnati area, got her start at an original location of G.D. Ritzy’s, the burgers and milkshakes chain that made a ballyhooed return to Columbus in recent months.

The pizzeria is known for the White Elephant symbol painted at all their locations, a choice which turned out to be something of a happy accident. The pachyderm was discovered when knocking down a wall for their Charleston location, when a previously covered wall revealed a mural of an elephant for the then White Elephant Saloon. The mural of the elephant, named Irene, was adopted by the company as their symbol and can be seen at all their pizzerias save for the original location. 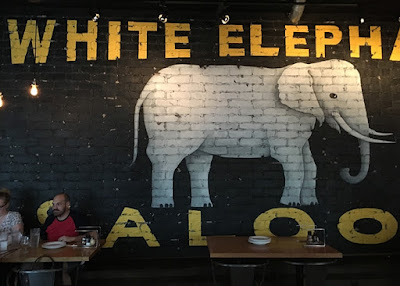 Personal Experience - my spouse and I have visited a number of times since their initial arrival into the area at The Shops at Worthington Place in 2012. We have also visited their Short North Arts District location, but that location was shut down this year. 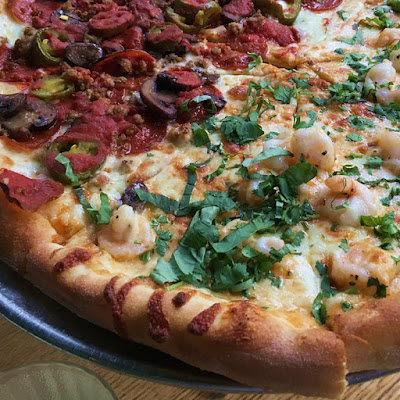 Pizza Thoughts - the most obvious comparison is with a company that shares a very similar profile in Cincinnati-based Dewey’s Pizza. While customizable pizzas are an option as well as a White Pie (multiple cheeses, roasted garlic, herbs and olive oil), most visitors are drawn to Pies and Pints' specialty combos like their Pine & Swine (pineapple, red onions, feta and applewood smoked bacon) and Steak & Mushroom (marinated grilled steak, roasted mushrooms, caramelized onions, roasted mushrooms, horseradish, Gorgonzola and scallions.) We've found that, like Dewey's, half-and-half is a great way to go with these pies 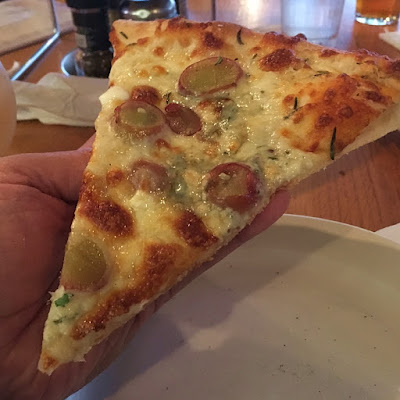 With that said, our favorite pizza just might be their Gorgonzola and Grape pie - not the usual “oh, no, fruit on a pizza!” trope you hear, this one didn’t sound appealing at first, but the combo of these two items plus fresh rosemary might have the highest ratio of flavor versus simplicity.

Structure-wise, the slices are again quite similar to Dewey’s, a bit floppy and thin in the middle with a slightly less prominent crust ring.

From The Fridge - like Dewey’s, this is a pie that’s probably better warmed up in an oven due to its structure, but it's acceptable from the fridge in our opinion.

General Thoughts - Dewey's and Pies and Pints rate in that middle ground between general takeout pizza and the truly gourmet pizzas. They're extremely similar,but for us, we like Dewey’s a touch more than Pies & Pints pie-wise, mainly because of that more substantial crust ring the former usually has on their pizzas (we do like chomping on our bones at the end.)

However, there are other tiebreakers to consider if you're looking for a dine-in experience. If your group might appreciate the free show (namely, restaurant staff tossing dough behind glass windows) and like creativity in the menu names, Dewey's is your place.  However, if you want a broader craft beer selection and something more like a sports bar atmosphere, go with Pies and Pints. 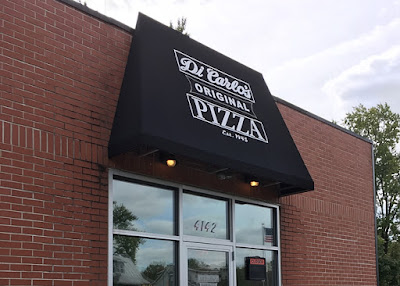 Company History - DiCarlo's Pizza dates back to 1945 in Steubenville, Ohio, when Primo Di Carlo, back from serving in World War II, raved to his parents (who owned a bakery in town) about a particular pizza he had fallen in love with in Italy. Through experimentation, a rather distinctive style of pie emerged, with numerous distinguishing features, including topping the pie with cheese and other ingredients after the pizza was baked.

Both Primo and his brother Galdo eventually brought the pizza to Wheeling, WV, and from there the style, which came to be known as Steubenville or Ohio Valley Pizza, spread on throughout the region, though in a more compact manner than many.  Here DiCarlo's franchises and other random purveyors of this style can be found in Ohio, West Virginia, and other random surrounding states. 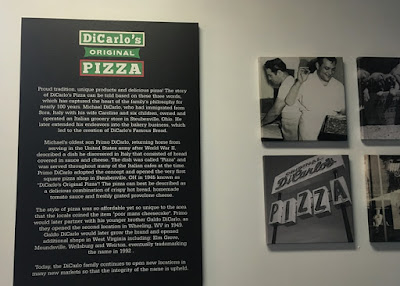 The lone Central Ohio location for DiCarlo's can be found in Hilliard located next to a gas station. It's pretty much more of a take out space than anything, but little hints of the restaurant's history can be spotted throughout the space.

Personal Experience - Ohio Valley Pizza was a completely unknown thing to me until I moved to the Buckeye State.  Based on my readings, this style was a deep secret best pizza ever or one of the most vile constructs to call itself pizza, and that only helped to drive up the intrigue for us.

Pizza Thoughts - The ordering experience almost proved as intriguing as the build up. I ordered online experience and was met with terms like "cut" and a whole host of options designated by "left", "right" or "whole."  Easy-peasy I'm sure for those in the know, but for a first-timer, something of a mystery.  As it turned out, I got exactly what I wanted with the "Pepperoni (Left) 12-Cut" - six squares of base model cheese and sauce, and six squares with pepperoni, in two separate boxes. However, once I took a closer look at my pies, I started thinking if I did get what I really wanted. 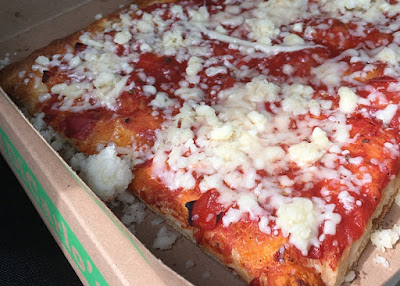 Here's where knowledge helped me out - I decided to let the pizza sit a bit and let whatever heat was there to melt the cheese. It still didn't look terribly appealing at this point, but as the saying goes, no guts, no glory... 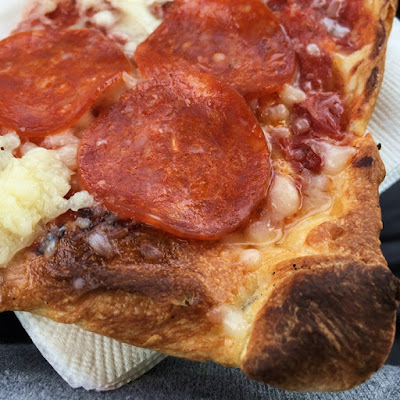 The stewed tomato sauce?  Reminded my wife and me of the sauce you get with frozen pizzas, but not bad.  The pepperoni, not being cooked, was as chewy as you'd expect it to be. And the cheese? Meh.  But, boy, that crust was something else, a, light, airy and crispy platform that in our minds elevated this motley collection of ingredients a far higher place than I would've imagined at first glance.  This pie might be what base model pepperoni and cheese pizzas you find at grocery stores dream they could be.

From The Fridge - No, no, and no. One bite was all it took, which is unsurprising really, considering that the base model is essentially a partially-baked pizza.. With that said, I discovered something delightful - a second go-around in the oven makes this pie even a touch better than the original incarnation, in my humble opinion. The heat not only revives the crust into its original glory, but also transforms the rest of the pie into something that is far more familiar to most people. 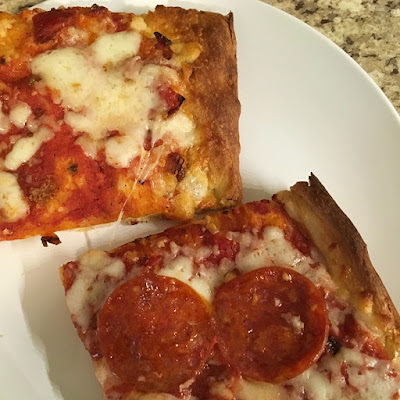 Initial Verdict - I was surprised I ended up liking this pizza as much as I did.  With that said, I would consider this pie generally under specific circumstances:

Note: The initial link for Di Carlo's Pizza in Hilliard was incorrect; it has now been fixed.
Posted by Joe