The above pictured informational signs, produced via efforts of the Columbus Visitor Center and the Experience Columbus organization, are not unlike your typical shopping mall directory sign. In this case, however, the signs helped direct visitors to major landmarks and attractions, retail shopping and businesses, restaurants, and government offices in the area. 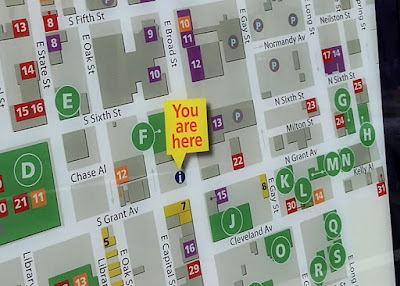 Despite the somewhat cluttered look, with multi-colored circles and squares intermingling with letters and numbers, the street map by itself was quite helpful in learning what streets went where in the downtown, and early on the directory actually proved helpful in finding out where certain businesses and restaurants were located.

Granted, most who grew up in the area probably pay no mind to the signs, but as a user of these signs initially, these signs grew to be a slight irritation over time in my mind for one very simple reason: they were never updated. This aspect became particularly glaring when it came to the restaurant listings: I always thought I'd be disappointed as a visitor to the city if a listed map destination (restaurant or not) was either something different or, perhaps even worse, non-existent.

Interestingly enough, I also grew a little fond of the signs over the same time, as they essentially were snapshots in Downtown Columbus's (recent) history. 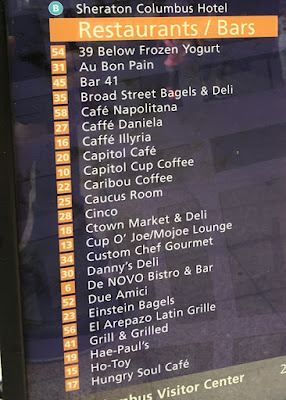 If you relied on this sign and sign alone, a visitor might luck into El Arepazo (a true gem, as I have blogged about in the past), take their chances with Ho-Toy (an old-school Chinese restaurant I have never ventured into) or Broad Street Bagels & Deli (a much better option than its nearby corporate neighbor Einstein Bagels, in my humble opinion.) Cleveland-based Danny's Deli bustles along at Front and Broad with its tasty Corned Beef and Pastrami sandwiches, while Cafe Napolitana has been providing slices for area workers for over a quarter century.

On the other hand, a good portion of this group proved to be movers, if not necessarily shakers. Au Bon Pain relocated to The Ohio State University Medical Center in December 2014 and wasn't replaced by anything in particular, while 39 Below Frozen Yogurt has also moved away into Olde Towne East (the cozy coffee- and tea-oriented Cafe Phenix took over the latter space in Spring 2016.)

Java Jan's moved out to (unsuccessfully) seek out their fortunes in Dublin; their space has been nicely occupied by the recently blogged about Hemingway's Coffee Nook.  Finishing out the coffee theme, the space that did hold Caribou Coffee (a victim of the botched and unnecessary replacement with Peet's Coffee ) now resides in good hands with one of the metro's best in One Line Coffee.

This listing also examples what might be a cursed restaurant space: Ctown Market & Deli on East State Street didn't last too long after their listing on this sign, they have since been succeeded by AJ's Cafe (a place I do miss), Corner Deli, and now Mona's Cafe. 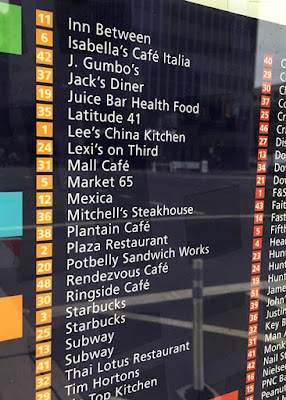 This next featured sign contains interesting history featuring the Keller family, which owned both the Inn Between and the Rendezvous Cafe. The former became the Hungry Soul Cafe (and is listed as such on the first sign featured), blending burgers and Hungarian dishes until its closure in early 2016.  Meanwhile, the Kellers turned the Gay Street located Rendezvous Cafe into Nosh Columbus, which also turned out to be unsuccessful. This space is now home to a branch of a chain capitalizing on a hot food trend in Poke Bros.

Mexica didn't have anything to do with the Kellers, but it went belly up as well as a not very good Chipotle-styled knockoff (if you believe the Yelp reviews.) Thankfully for downtown workers and residents, the decadent dishes of the breakfast and brunch-oriented SuperChef's have made the place a worthy stopover since September of 2013.

Notable restaurants still plying their trade from this list include venerable Ringside Cafe (open since 1897 in Pearl Alley) and the classic hole-in-the-wall Jack's Downtown Diner. Interestingly, Jack's neighbor, the popular Peruvian sandwich shop Si Senor, was not in the picture yet: their move into their space on East Lynn Street did not take place until the middle of 2013.

In addition to their growing outdated nature, some of the signs simply have plain seen better days, such as these examples: 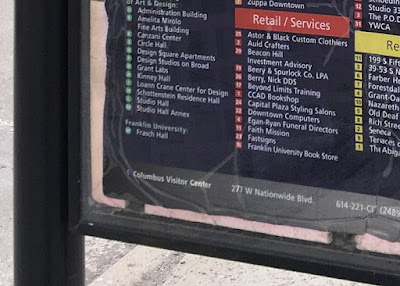 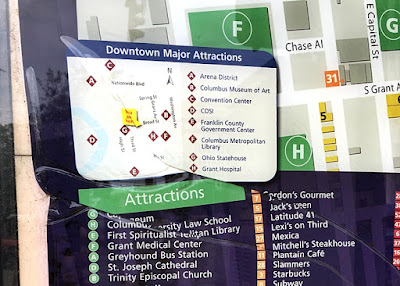 I had actually been thinking of writing up a post like this for awhile as a gentle request for someone to at least take a good hard look at replacing the signs. However, based on a recent sighting, it looks like this process has slowly but surely begun. 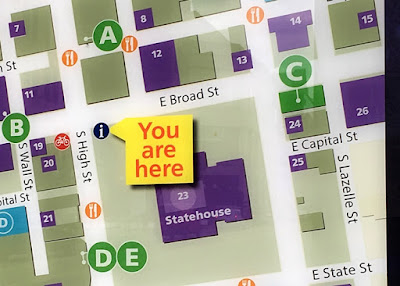 This map from this newly installed Information Kiosk sign (note the listing for the Hotel LeVeque) was found on the southeast corner of Broad and High near the Statehouse. Already, one can see that the street map remains easily followed and thankfully cuts down on the visual clutter of colors, shapes and numbers that the previous map models sported. 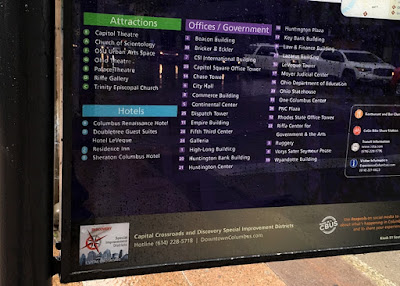 A lot of that de-cluttering is due to the elimination of restaurant listings, a move that gives these signs an extra shot of longevity (a 2016 study by the Perry Group found that 60% of Ohio restaurants failed within three years.) While the orange "Restaurant and Bar Cluster" fork & knife symbols aren't comprehensive (one could argue that Gay Street on this map between High and 3rd Street deserves more than one of these symbols), it does a generally good job of directing the non-mobile-phone-owning visitor to where the food and brews are.

My guess is that these signs will continue to be updated throughout the area over time, which is a welcome change in the big picture. Still, if you want a fun snapshot of what had been the downtown dining scene, find one of these older model signs and ponder when Mikey's Late Night Slice made visitors to the Commons pay, eat, and leave, or how the short-lived Big Bites managed to get "memorialized" versus its predecessor Serenity Cafe, which served its Reuben sandwiches and other deli-type fare for more than a decade out its South 4th Street location.
Posted by Joe