This first part of our Butler County adventure covers many of the restaurants we visited, plus a place where one could easily walk off those calories in a setting that combines nature and art (note that all opinions on the places written about on these posts, like any of my others, are strictly our own.) 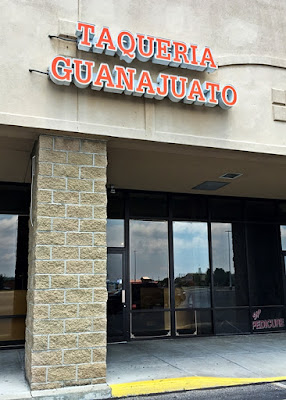 The menu at this taqueria, located in a strip mall on the northwest side of town, is on the smaller side for a brick and mortar, but all the familiars (tacos, fajitas, burritos, etc.) are on the menu and the prices are fairly inexpensive. While the street tacos are decent to good (they somewhat uniquely use yellow corn tortillas here), it is the Torta which earned my spouse our ongoing, unofficial contest of best menu choice. 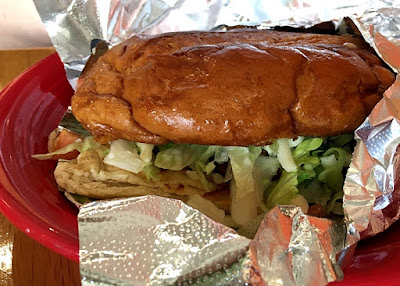 More specifically, the bread used for this sandwich, which is specially baked for the restaurant, elevated this basic creation a couple notches up the ladder of goodness. The bread was so good, I was using it to scoop up my taco scraps from the bottom of my plate rather than the freshly fried chips which had come our way earlier in the lunch. 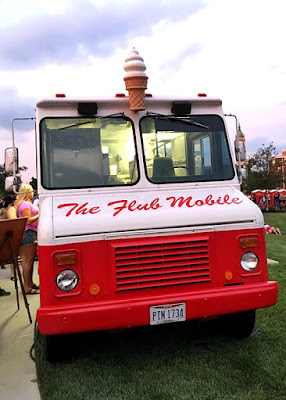 Flub's Ice Cream - As one might know, I've made a habit of touring ice cream shops around the country. My initial research into ice cream in Butler County showed that outside of Graeter’s, soft serve generally rules in the area. Unsurprisingly, our hosts set us up with one of those purveyors in Flub's. This local favorite, which started in 1966 in Hamilton, now sports three locations and a food truck nicknamed "The Flub Mobile", which we spied at the year's first RiversEdge live music event. 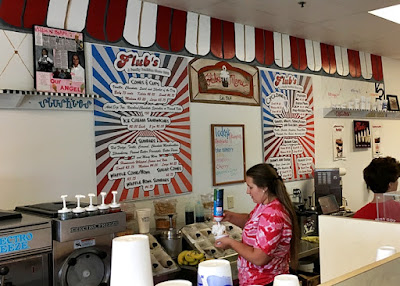 Their modern strip-mall location in Fairfield doesn’t have the old-time architectural charm that their original location has, but rest assured that you can get all their offerings from soft serve to sundaes, and shakes to slushes.

After looking over the menu, we decided their Cyclones, blending their base vanilla soft-serve with a myriad of ingredients, were the prime offering. Our biggest challenge turned out to be choosing among the 40+ offerings, many of them modeled after familiar candy bars. But whatever you may choose (we chose Julie’s White House Cherry Cordial and Rob’s Payday ourselves, both very satisfying creations), you can count on getting a good deal: our "smalls" were rather substantially-sized. 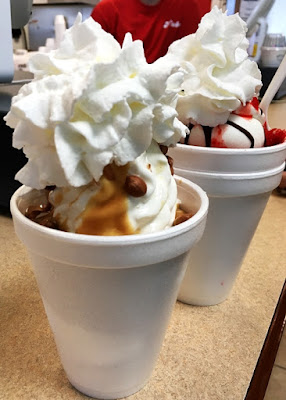 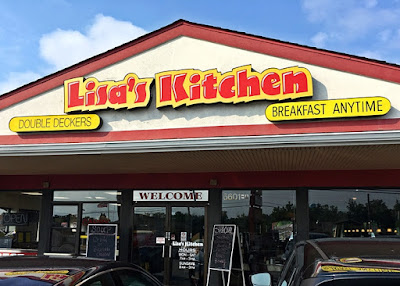 Lisa's Kitchen - Columbus’s many diners have their loyal followers, and one can get into a minor kerfluffle if their favorite is seen as being disrespected in some way. Fairfield’s Lisa’s Kitchen strikes us in a similar vein: a diner with a whole host of regulars serving all of the calorie-laden classics (we found only three items labeled as “heart-healthy” on their menu) you'd expect from a place like this. 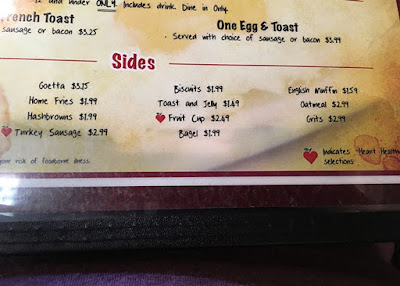 The emphasis on regulars is important here: this location was once one of three popular Red Squirrel Restaurants in the area. When they closed down, a long-time employee of the restaurant missed her regular customers so much, she decided to reopen the Fairfield location under the new moniker.

We initially thought hard about items like the Goetta Reuben Sandwich and their Double Decker sandwiches in general, but in the end we chose off the breakfast menu. In this case, I won the unofficial prize of best choice off the menu. My spouse’s Corned Beef Hash was a good solid house made version, but my Chicken Fried Steak was the clear winner, a wonderfully crispy breading on the cubed steak and a nicely rich sausage-laden white gravy. 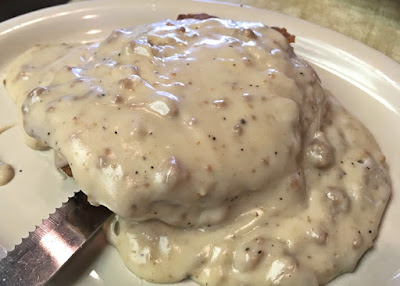 Pyramid Hill Sculpture Park & Museum - In 2000, former Ohio Governor Bob Taft declared the City of Hamilton as "The City of Sculpture." Indeed, as one walks throughout town, numerous forms of sculpture can be found, from the city's namesake (Alexander Hamilton, the country's first Secretary of the Treasury and subject of a Broadway play you may have heard of) to those depicting the works of favorite son/author Robert McCloskey, and much more. Perhaps the centerpiece of this  focus lies on the southern outskirts of town in the form of this 300-acre park.

Established by soldier/lawyer/politician/philanthropist Harry T. Wilks, what would eventually become the park started as Wilks' own home plus 40 acres of surrounding land. Over time, Wilks acquired surrounding parcels of land; combined with his love of sculpture and his fear that private interests would develop this land after his passing, he founded the Pyramid Hill Sculpture Park and donated the land (including that which surrounded his home) for the park's usage.

There are three main ways to get around this wide-ranging park. Renting an “Art Cart” allows you motorized transport directly up to most of the park’s sculptures and is well suited for those with mobility issues. The hybrid method which we ended up using (we were given an option of a free cart rental, but no carts were available at the time we arrived) is to use your own vehicle to drive yourself around to various parking spots, and forge on to the surrounding grounds from there. The most intrepid folks can leave from one spot and trek across the entire park on foot. Guests opting for a longer day at the park are encouraged to bring a picnic lunch to dine among your favorite artworks.

The sculptures here range cover both the gamut in terms of size and placement through the property; when you come upon one, there always seem to be two or three more off in the distance. The paper maps given at the Visitors Center are not completely up to date; they are best used both as a general guide around the park and as a visual guide to identify the park’s sculptures. In addition, more recently installed sculptures do not appear on the map either, giving you "bonus" discoveries as you continue your wanderings. 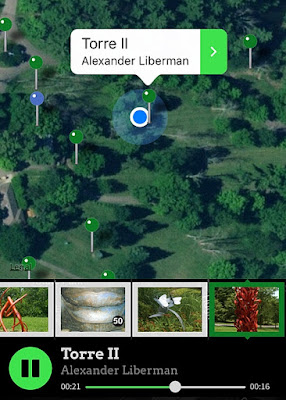 The OtoCast app, downloadable to your mobile phone, offers both location information and audio commentary to most of the park’s sculptures. A bonus aspect here is OtoCast is used a number of art-related sites around the U.S. and Canada (for Columbus, audio commentary for several of the neighborhood Art Walks is available through the app.) 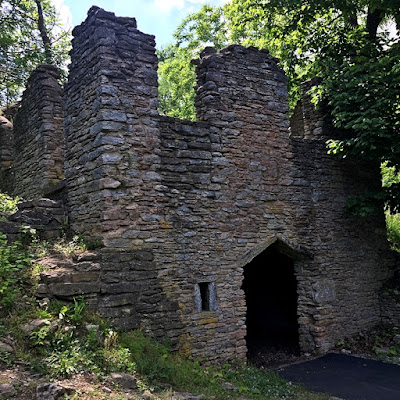 Aside from the Wilks residence (not accessible to the public, although you can sit with a sculpted version of Wilks on a park bench for a picture op nearby) and the Visitors Center, the park offers a couple of other notable buildings. The remnants of a unique stone building built next to the stream that runs through the park offers a glance of early 1800s living. 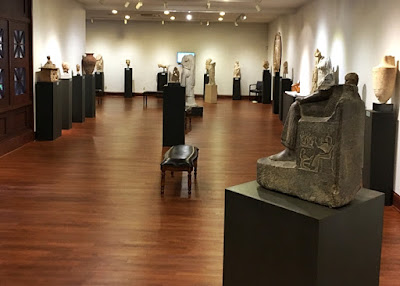 Meanwhile, the Ancient Sculpture Museum (no separate admission needed) not only offers a concise inventory of genuine historic sculptures and mosaics from throughout the centuries, but it also offers a room that allows you to glance into both the residence and the life of the park's founder Wilks. 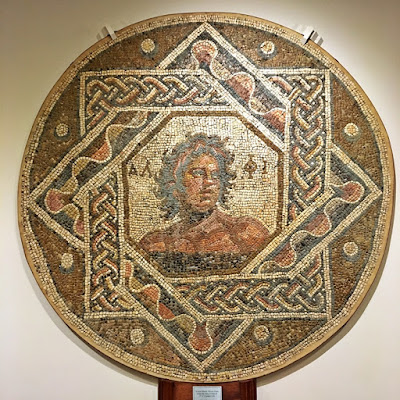 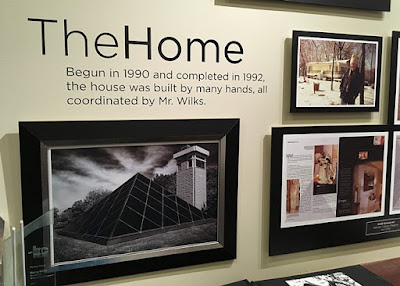 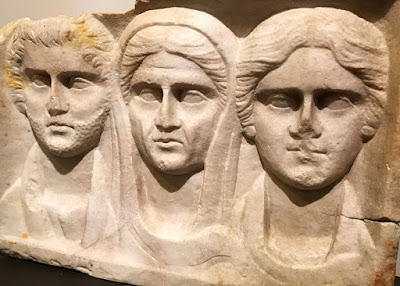 Although our admission was comped, the regular admission to the Pyramid Hill Sculpture Park is a relative bargain ($8 for adults, $3 for children 6-12, kids under 6 free). Considering what you get, we definite plan on making a return trip to this uniquely beguiling place in the future.