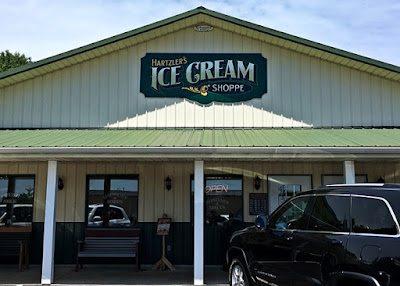 Perhaps reflecting the family's humble upbringing and religious roots, the roadside building which houses Hartzler Dairy, located in the northern reaches of Wooster, Ohio, isn't as flashy as some of the other dairies I've visited like Young's Jersey Dairy in Yellow Springs or Toft's Dairy up in Sandusky. As you pull up in the parking lot, the trappings of a farm and a smallish playground that beckons kids to let off some extra energy surrounds you. But for the most part, the essence of Hartzler's is inside the ice cream shop. 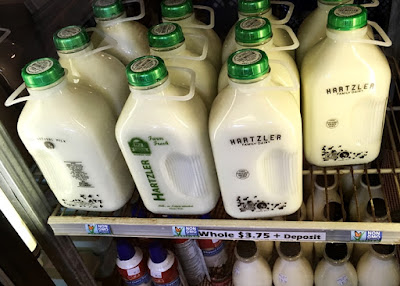 Distinguishing Hartzler's from many other farms was their early focus on natural farming, which they undertook in 1964 after several bad experiences with chemical pesticides. In the 1990s, the Hartzler Family branched out to include dairy products in their repertoire. Being the first Ohio dairy to open in nearly 30 years, Hartzler found the going a little slow getting their new venture to the public, but hard work and perseverance paid off when its first bottle of milk was sold in the summer of 1996.

Not surprisingly, you can pick up a bottle of Hartzler's Milk at the shop (just make sure you have a little extra for the bottle deposit) as well as other dairy basics, a non-GMO certified string cheese, and a small collection of food products from various Amish Country producers. 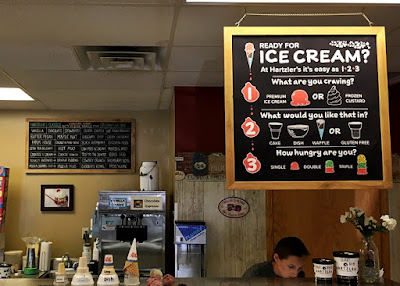 So what about the ice cream? Hartzler sports some clever farm-oriented names for their creations (such as chocolate ice cream creations like the "Moonure" (caramel, cheesecake, salted pecans, and dark chocolate chips) or the "Trip to the Dentist" (laced with Reese's Peanut Butter Cups)), and many of the offerings offer you a milkpail's worth of mix-ins. With that said, I went simple with the base Butter Pecan and Coconut Almond Fudge (think an Almond Joy candy bar) and I must say this is some of the best ice cream I've had ever in my travels, with delightfully bright-tasting mix-in ingredients coated with an incredibly smooth ice cream base. I definitely would have no objection to making a return visit to Hartzler, hopefully more sooner than later. 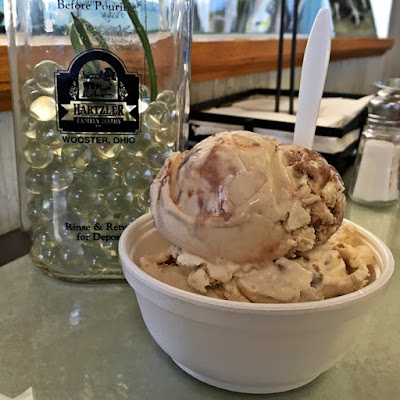 Farther south on the highway, I took a slight detour to venture into downtown Loudonville where I stumbled upon this unique little ice cream cafe. 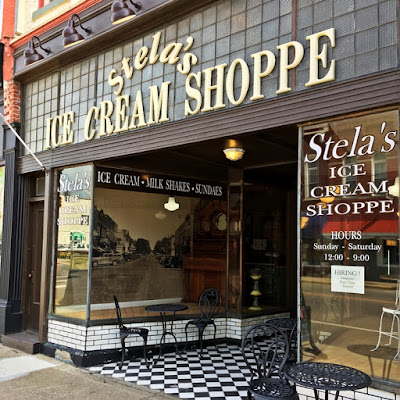 Operating out of a classicly-styled brick-walled structure built in 1920, Stela's operates as a seasonal ice cream shop, no doubt in parallel with the high season associated with outdoor activities in nearby Mohican State Park (in fact, the town touts itself as "Canoe Capital of Ohio" due to the number of liveries it hosts along the Mohican River.) 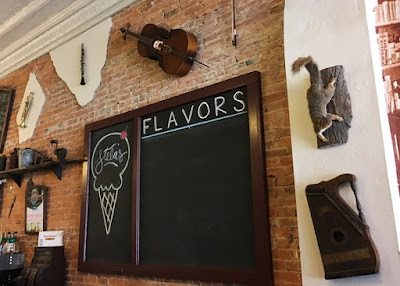 Stela's interior might be one of the more unique ones for an ice cream cafe: a random blend of historic photo murals, taxidermy, and musical instruments, which I am guessing are nods to both the village's as well as the building's history. The cafe also hosts perhaps the most compact yet widest ranging (geographically) displays of Ohio-based tourist pamphlets and info, covering everything with Northeast and East-Central part of the state, Put-In-Bay, and down to Delaware. 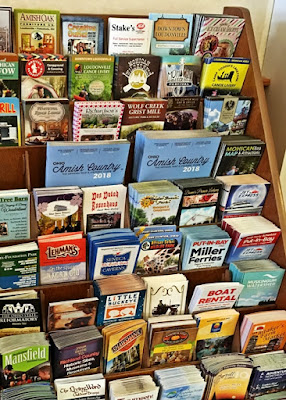 While Stela's does not make their own ice cream, their ice cream is reliably solid being sourced from Sandusky's Toft's Dairy.  This as well as that unique decor make Stela's worth a stop if you're in town (add in a house-made waffle cone will make things just that much better.) 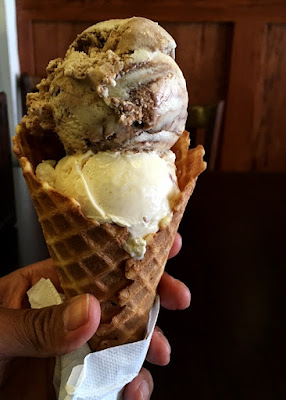