I Could Be Happy The Rest of my Life on a Cinnamon Whirl (Pt. 1)

When it comes to sweet treats, those that have cinnamon are hard to beat in my book. In fact, one of the first sweet treats I enjoyed here during one of my first visits to Columbus was the rather substantial (and tasty) rendition put out by the North Market's Omega Artisan Bakery. A recent "Best of Columbus" article by Columbus Monthly provided me some inspiration to try something that I hadn't done in awhile in the form of a food crawl. Add in a desire to seek out parts of the metro I hadn't necessarily wandered much into, and you got yourself one sweet journey indeed. 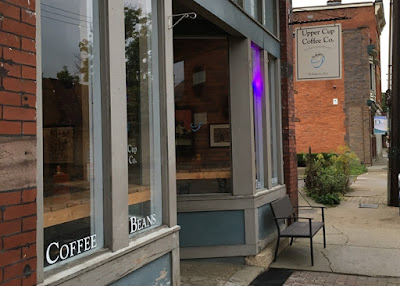 Of course, with the impending cascade of sweet treats, a good strong cup of java seemed to be in order.  Wanting to venture on roads less traveled, I ventured into Olde Towne East and dropped by Upper Cup Coffee for the first time in a couple years. Opened in September 2011, owner Micael Habte's Eritrean roots can be seen adorning the brick walls of this cozy coffee cafe in the form of African artwork and media amidst all the coffee paraphernalia. It's definitely one of the cooler and more unique cafes to hang out in within the metro. 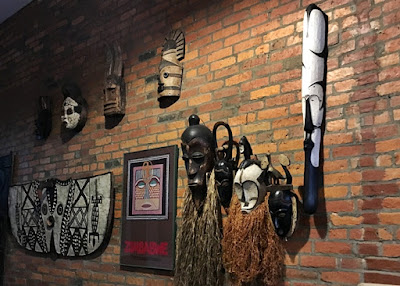 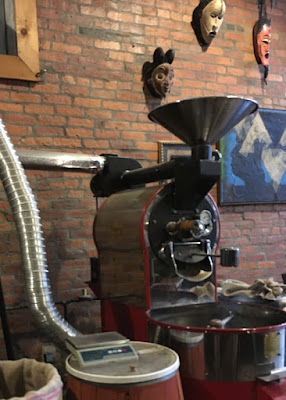 This Upper Cup location (a second location in Gahanna has just recently opened its doors) offers all the basic styles of drip, pour-over and espresso-based drinks, as well as roasted beans and a few food-related items. 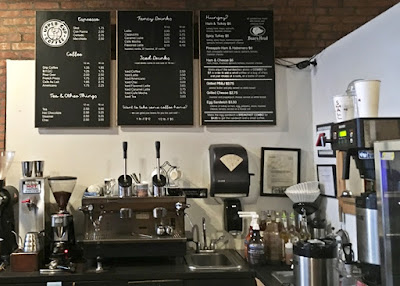 I decided a nicely strong pour-over coffee was in order for this trip, which the folks here delivered quite nicely.  As I waited, a nice little groove came over the air in the form of Portugal, The Man's "So Young", giving me an extra dose of assurance that this little sojourn would be a good one.

From Upper Cup, I ventured eastward on Livingston Avenue, where the the neon sign glow outside a fairly non-descript strip mall told me I had reached a city institution. 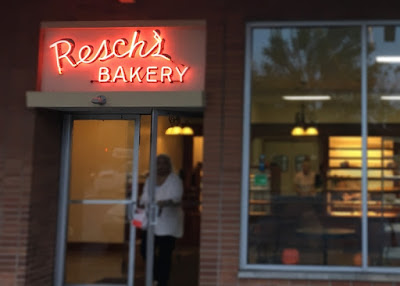 Resch's Bakery has seen six family generations and over 100 years of operation within the metro, easily qualifying it as the city's oldest bakery. While its original location at Ohio and Livingston closed in the 1990s, its larger building from the 1960s still continues to pump out sweet treats. 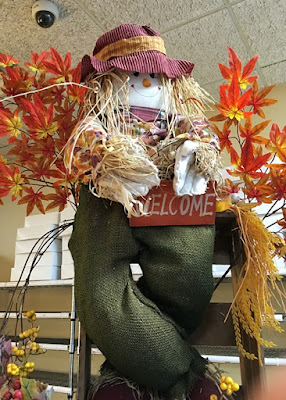 I'm a sucker for old-school bakeries, and I figured out pretty quickly that Resch's isn't big on the frills. Perhaps they already know it's not the fancy that has drawn customers in over the years but rather the baked goods themselves, from donuts to cupcakes to pastries and more, which are laid out simply on the display racks. I imagine the regulars already know what they want. 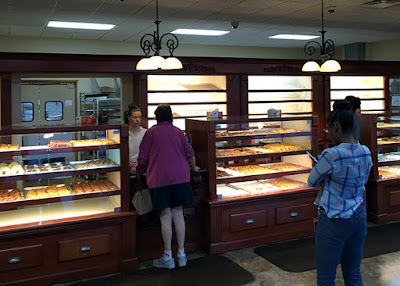 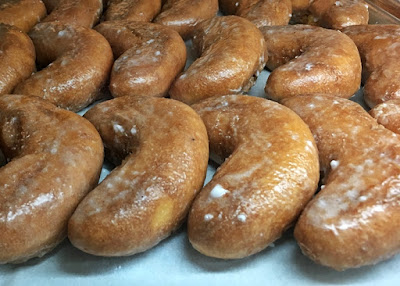 Being a newcomer, I received some kindly assistance, where I discovered my slight sadness that the only cinnamon sweet treat available at this early hour was a cinnamon danish. I'm not much of a danish person these days, but Resch's rendition was quite good, with a nice blend of cinnamon and classic icing on a lightly airy base. With fall in full effect, I felt it was a must to grab a pumpkin cake donut, which sported a pleasantly potent amount of the usual spices without being overbearing so. 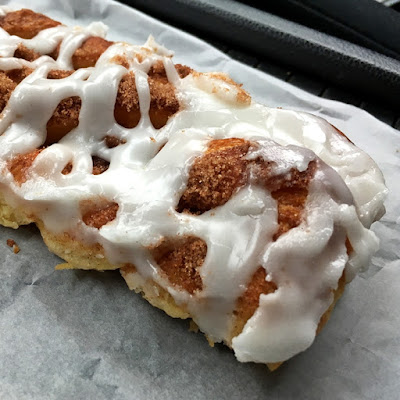 My next stop was a place which didn't sound correct in terms of directions, as I found myself at Kroger Supermarket.  However, as you wander closer to the store's entrance, you discover that this isn't your standard everyday version of the market. 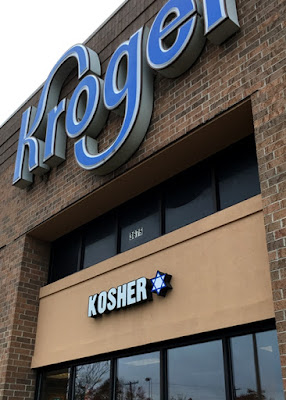 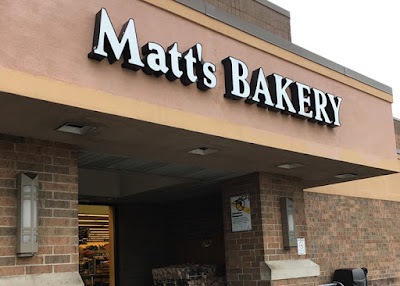 A first-timer to Matt's Bakery may still be a little uncertain as you wander inside this Kroger, since the front area of the main entrance is dominated by a standard-issue Kroger bakery. However, you need only wander to the back to reconfirm that you have found perhaps the only full-service certified Kosher bakery in the metro. 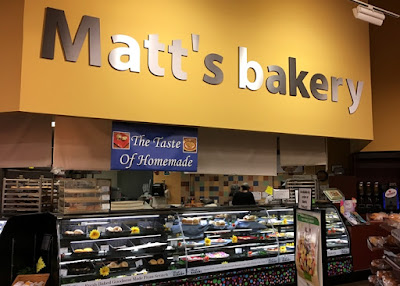 The current rendition of Matt's Bakery within the Kroger, established in 2011, was the result of a unique arrangement suggested by the bakery's certifying agency Vaad Hoir, who had seen a similar arrangement of in other cities.  It turned out to be beneficial for both parties, as it allowed Matt's to move into a larger space and allowed Kroger to expand their offerings of Kosher goods. 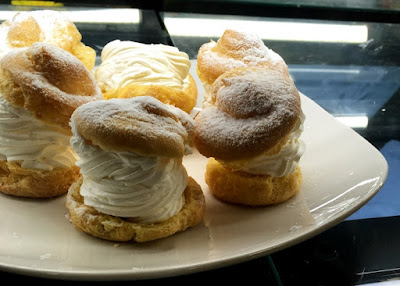 While there were baked goods in the display case (such as these enticing cream puffs), most of Matt's Bakery's wares were of the prepackaged variety in the surrounding shelves and refrigerator cases. Familiars like brownies, cookies, and pies were in plentiful supply, mixed in Jewish cuisine standards like Challah Bread and Kugel. Befitting the season, a slightly outdated sign indicating the items that could be special-ordered for Rosh Hashanah was still posted. 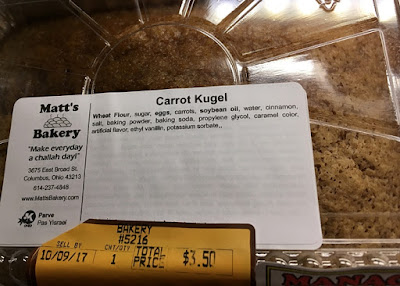 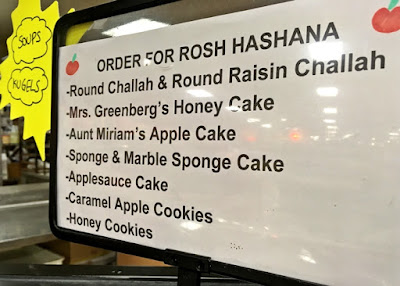 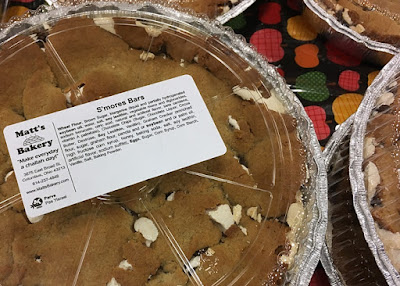 As it turned out, I decided against the lone cinnamon-laden baked good for sale this day: as much as I adore a good cinnamon coffee cake, I figured my spouse and I didn't need a half-loaf worth of it (or at least, our waistlines didn't need it.) Instead, I walked out of there with a 6-pack of their bagels for work morning munching. Matt's bagels aren't as topping-laden or sized quite as large as my (still) favorites in the metro in Sammy's New York Bagels, but they do sport a nice chew to them and were priced nicely at $3.75 per half-dozen. 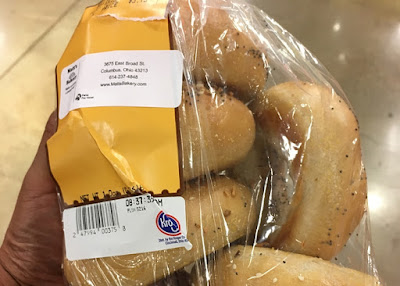