Antiques and Brews: From The Tee Box to The Pulpit

If this summer is any indication, my spouse and I have confirmed our blood types as AB, as in Antiques and Breweries. Our last trip took us into north-northwest Ohio into Mercer County, where antique hunting led us to drop by places like Tailspin Brewing in Coldwater and Moeller Brew Barn in Maria Stein. Other recent jaunts have taken us into Cambridge (where we stopped at Southside Brewing) and down to Lancaster and Logan, with a finishing duo of Little Fish Brewing and Jackie O's in Athens.

This lovely combination has again led to another fun road trip to explore both, as we wandered into even farther up into true Northwest Ohio, starting at the tee box and finishing up at the pulpit.

Defiance, Ohio, county seat which was named after the fort established by the regionally influential General "Mad" Anthony Wayne at the confluence of the Auglaize and Maumee Rivers, turned out to be a bit of a larger town than I had thought it would be at just over 16,000. We actually didn't think to look for a brewery here until a helpful staffer at the local branch of the regional coffee chain Biggby Coffee (BTW, their iced coffee is much much better than many of those more well-known chains' versions) noted that The 4kd Crick Brewery (pronounced "fôrkt krik") had just opened nearby. 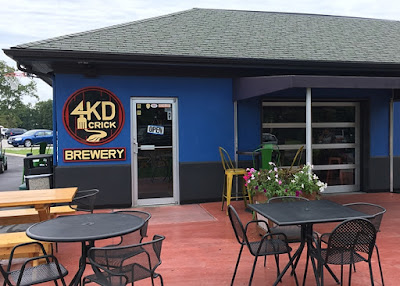 Located next to the clubhouse at the Eagle Rock Golf Club, 4kd Crick was a place I half expected 1) for us to feel a little under dressed based on the fancy entrance into the property and 2) the brews to be a small collection of easy drinking lagers and ales. We are happy to report that neither was the case, and this unplanned stop proved to be well worthwhile one. 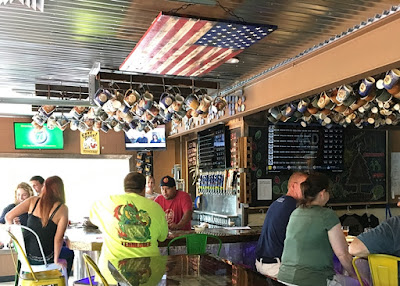 The taproom is about as easy going a place as you could want for that proverbial "19th Hole", with all the trappings of a regular nano-brewery (exposed brewery tanks, a Mug Club, plenty of (clever) brewery-related swag, a "Where The 4k Are You From" map board, and a couple of televisions (tuned to, what else, golf-related broadcasting) to watch. Service was equally casual but prompt, with friendly staff and a generally chipper and chatty environment. 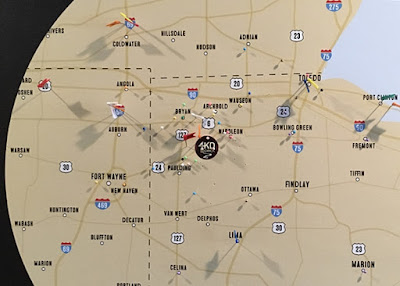 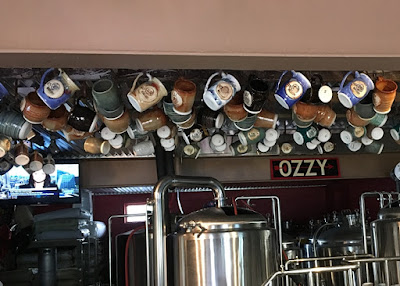 While we did not stop for food, 4kd Crick has the services of the on-site Sweetwater Chophouse to provide a decently stocked menu selection, ranging from Smoked Wings ($.60 each day every day) and other appetizers as well as various panini sandwiches.

As for the beer, yes, you'll find the easy drinkers like their Turkey Crick Blonde Ale and their take on a Hefeweizen on tap, but we also found more novel (and it turned out, good solid renditions of) styles like a Sand Trap Saison (one of our favorites this day) and two versions of a Russian Imperial Stout (the base Ole Ransom version was a tad sweet, but that was well balanced out by the roast coffee flavor in the coffee-infused version.) 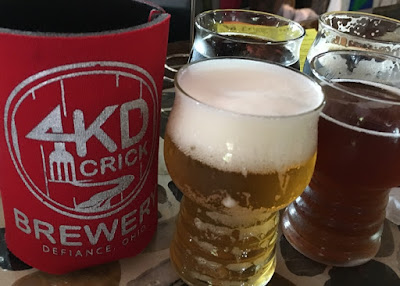 After some more antique hunting at the Field of Memories store in Archbold (the home of Sauder Village), we wandered into the town of Bryan, the county seat of Williams County. Along with being the home of "Etch-a-Sketch" toy producer Ohio Art and birthplace of Spangler's Candy (maker of "Dum-Dums" brand lollipops), this town of just over 8.500 people sports one of the most unique breweries in this state, if not the nation. 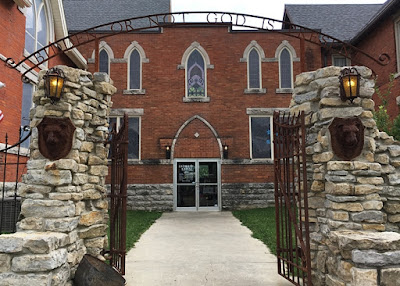 We had been intrigued by Father John's Brewery since we heard about it a couple years ago. Dr. John Trippy's multi-million dollar endeavor to refurbish an old 19th century Methodist church essentially in the middle of nowhere, USA, into a combination restaurant/brewery/on-premise brew-your-own beer (similar to Columbus' North High Brewing)/religion haven sounded fascinating on its face. Still, we were still a little uncertain as we examined the building, which looked quite fabulous and, well, like an active place of worship. The gated entrance, with the phrase "Bidden or Not, God is present" arched in the ironwork above, only enhanced that feeling. 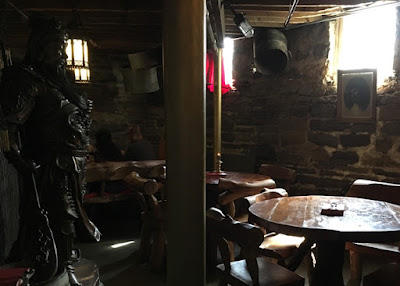 The brewery/restaurant portion of Father John's, which lies in the lower levels (other areas of the church like the parsonage and the sanctuary are available for rental for private events), is an impressive visual showcase for almost many religions of the world. Religious artifacts and symbols abound in every nook and cranny, with some more subtle (numerous appearances of church mice, Tibetan prayer flags. and hymnals on all tables) to the prominent (and the large cross-shaped bar which acts as one of the space's centerpieces, and the Buddha which guards the tap area.) 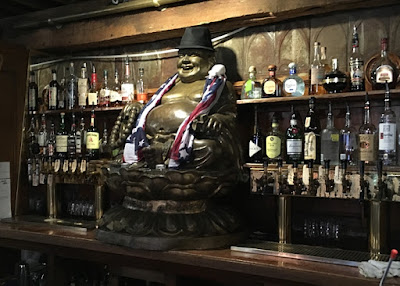 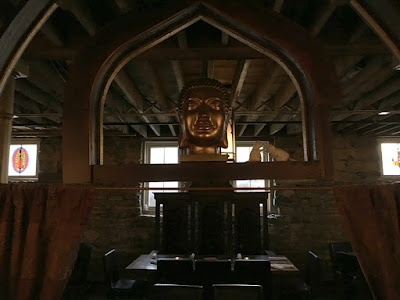 The folks who served us at 4kd Crick had visited this brewery themselves, and they said we should keep an eye out for the "Game of Thrones" table. We admit we have gotten away from watching network- and cable-based serials these days, but this table was impossible not to spot with its humongous wedged sword as centerpiece. 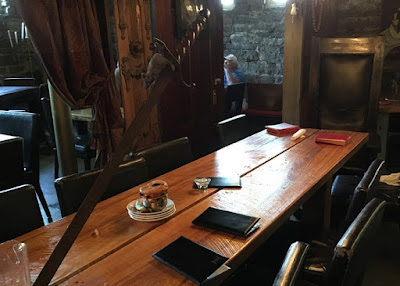 The restaurant menu is pretty diverse, sprinkled with plenty of (mental) wit - for example, the children's selections are all listed in the "Lil' Monk" section, while "Benediction" includes all the desserts. As we had a dinner date with my spouse's parents, we were not in the market for what we heard was one of the restaurant's signature dishes in their Bison Burgers (which features grass-fed, ethically raised bison from the owner's Wild Winds Farm in nearby Fremont, Indiana.) However, the appetizers from their "Opening Prelude" section did the job just fine, especially some impeccably fried up "Cheezus Curds". 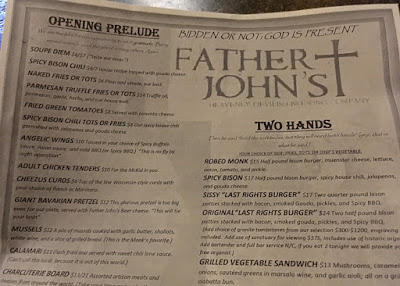 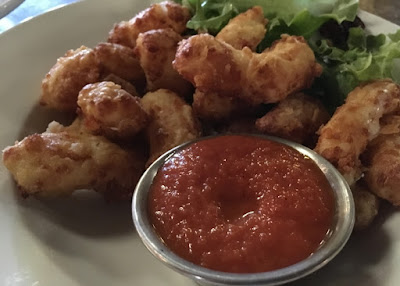 The only slight disappointment was their brews (we had pints of their "Eye for an Eye-PA" and their "Maiweiner" Vienna Lager), which were drinkable but taste-wise paled a bit when compared to the experience of Father John's as a whole and some other recently visited breweries. But that's okay, as the entire experience of Father John's easily has bidden us to, at the very minimum, do a more comprehensive beer sampling and ideally a deeper delving into their food menu. 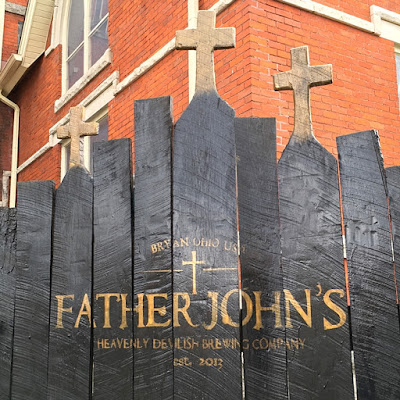