When you roam around the state of Ohio as much as we tend to do, you end up at a lot of places that are definitely worthy enough of a mention despite the one singular visit. This is the case with these two venues we had the pleasure of visiting recently in The Bates Family Farm up near the lakeshore in Sandusky and the combination Georgetown Vineyards/Southside Brewing in the foothills of Appalachia in Eastern Ohio's city of Cambridge. 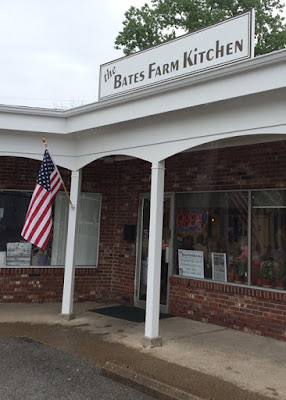 The diner concept is one that has proven durable over the years, and usually those that sport a unique atmosphere or those that try just a little harder for something beyond the basic are the ones that grab your attention. The latter aspect is what drew us to The Bates Farm Kitchen during a recent visit to Sandusky.

Chef and co-owner Clint Bates has an interesting story as noted in the Sandusky Register, earning his chops in the Cleveland market at places like The Greenhouse Tavern as well as in long-term recovery for alcohol addiction. As noted in the article itself, Bates acknowledged there would be no way he could have achieved his dream goal of owning his restaurant without acknowledging the issue when he did. 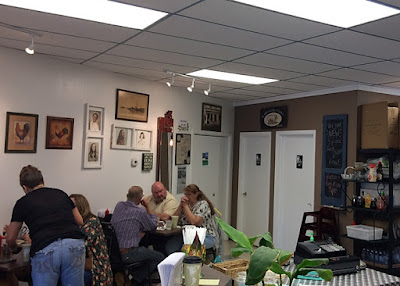 The legacy of Bates' mother lives on in the walls of the eatery. In an otherwise fairly unremarkable interior structure-wise, mementos from his mother's house and farm decorate the walls and brighten the atmosphere. The bar also adds a neat little touch with its circle-patterned aluminum top. For Columbus natives, it reminds me of a mix of the old Best Breakfast and Sandwiches space (which now has new life as Delaney's Diner) and the Wildflower Cafe on Indianola. 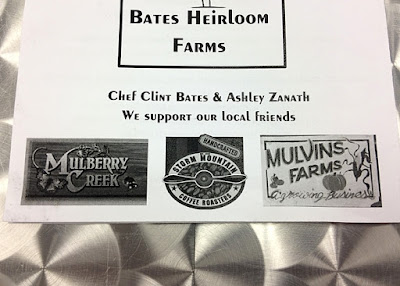 The menu provides a slew of "classic" diner combos with some Northern Ohio standards like a Walleye Sandwich and some intriguing healthier-sounding options like a Red Russian Kale Salad and a Falafel Sandwich. Bates Farm Kitchen goes for from scratch with many items, and tries to keep things as local as possible, sourcing from their own farm as well as local vendors. 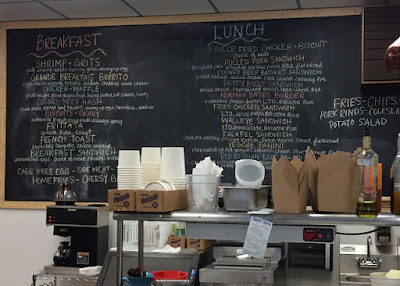 Like pretty much everyone there this morning, however, we were there for the comfort food, opting for the Biscuits and Gravy (one of the better renditions we had recently) and their house-made and delightful Corned Beef Hash. From our observations, it seemed the Grande Breakfast Burrito (a pretty monstrous construct) was also a very popular item. Topped off by some good small town family hospitality, our breakfast and experience at this eatery was about as tasty and pleasant as we had hoped. 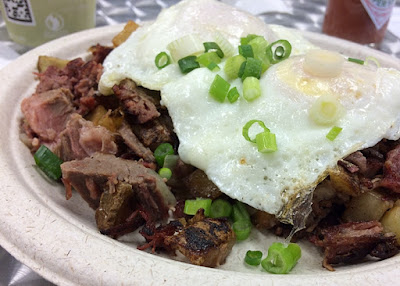 Meanwhile, at the intersection of Interstates 70 and 77 (not to mention the old National Road US 40) in Eastern Ohio lies the quaint town of Cambridge, birthplace of one of the most respected public servants of recent times in Astronaut and Senator John Glenn, who passed away last December.  This town of just over 11,000 people sports a pleasing downtown area (check out the Penny Court Antique Shop if you're at all into antiques) and is a gathering place for glass aficionados, sporting several prominent glassware makers throughout its history. 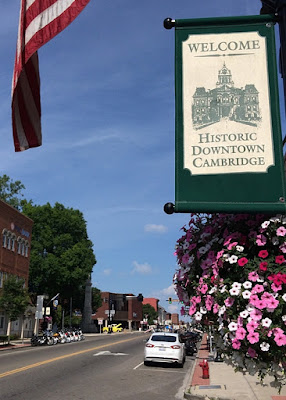 To the south of the main downtown area lies the Georgetown Vineyards, whose main building spaces lie perched on a hill. Established in 1998, the owners of the vineyards added on Southside Brewing in 2016, more likely than not a nod to the state's exploding craft beer scene. As brewery hoppers making our first jaunt into the area, we figured we had to drop by and pay them a visit. 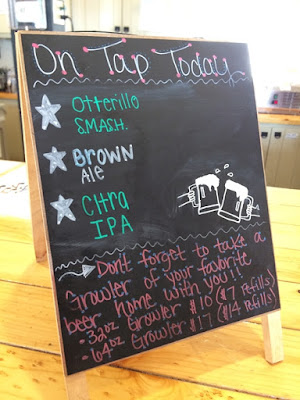 We had slight qualms coming in here as our previous encounter with an what will be unnamed combination winery/brewery operations was not an altogether pleasant one. Similar to that unnamed operation, the number of brews on tap on the Southside side of the business was fairly limited. However, in this case, these beers, while nothing eye-popping, were perfectly drinkable affairs, perfect for a very warm summer-like day.

The wines at Georgetown proved to be an upgrade as well: it took a bit of warming up, but that familiar taste of Niagara (one of my spouse's favorite Ohio-style wines) finally revealed itself in Georgetown's rendition of this sweet wine. Even more interesting were the Rhubarb, a nice combo of tart and sweet which went well on this warm day as well as the very sumptuous Fredonia, which seemed it would be the perfect base for the pitchers of sangria that we saw floating about. 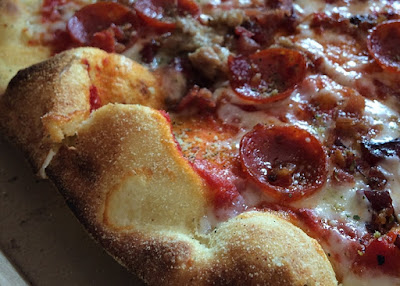 Georgetown's main food option lies in their brick oven pizzas. Touted to be 13", they actually turn out to be more larger-in-diameter affairs.  However, their incredibly thin crust (pretty close to cracker-thing without being cracker-hard) meant we could scarf down the whole pie without too much guilt. The side caprese salad, sporting fresh tomatoes, mozzarella and basil with olive oil and balsamic vinegar, was a simple but satisfying finger food. 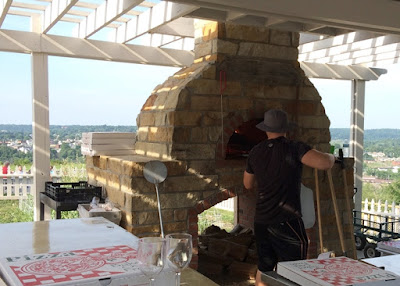 It turns out the vineyard's outdoor patio is one of the more nicer you can imagine, with plenty of greenery and pretty flowers, a little pergola containing the oven from which the pizza pies are baked up for customers, and a multi-tiered seating area that gives you a nice look not only over the grapevines but also much of the land to the north (incuding the city of Cambridge) as well. Indeed, it was a lovely place with a glass of wine or beer in hand and soak up the sun for a bit. 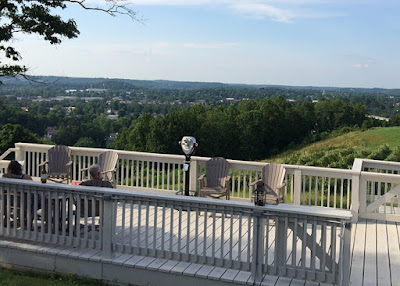