When I think of the concept of the food crawl, the taco is just about the perfect vehicle for an elongated effort. When I first got the foodie bug back in San Francisco, my first such quest was all the local taco trucks I could find within a week's period. Once I moved to Columbus, one of my favorite food related excursions turned out to be Columbus Food Adventures' Taco Truck Tour, which shined a light on something I hadn't expected when I moved over here but found quite exciting in Columbus' plethora of traditional taco trucks.

My first preference is almost always going to be the taco truck street taco, but being a fan of the taco concept in general, I like venturing into pretty much anything taco-related, whether it be traditional, fusion, or homemade (our own Filipino adobo shredded chicken tacos have become some our own dinnertime favorites.) This post covers two places I had been intrigued by for awhile in the northwest-based Hass Taqueria and the Short North's popular hangout Bakersfield. 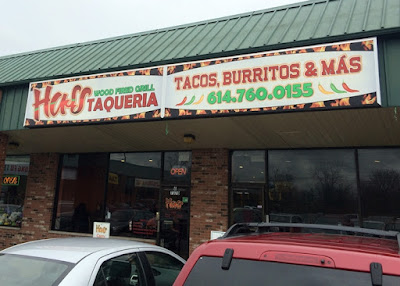 Taco trucks in Columbus for the most part can be found in all parts of the metro, but they are noticeably absent in the northwest quadrant.  In this area, brick and mortars are where you need to venture to get your traditional taco fix, and thankfully here, several places (most notably Los Guachos, Charritos and Cuco's) do a great job of giving you a taco truck style experience melded with expanded menus because, well, that's what a brick and mortar allows you to do.

I had always heard the same thing about Hass, enhanced by the use of a wood-fired grill, which added another taste element that I you might not necessarily find at other similar places.

Hass' inside isn't terribly fancy, but it does provide plenty of seating. The crowd proved to be pretty diverse on my day of visit, which might normally be a red flag in terms of authenticity save for the area of town (the busy suburban Sawmill corridor north of I-270 that basically separates Columbus from Dublin) in which this eatery resides.

Positive vibes were immediately received once I got to the counter: a man who I presumed was the owner greeted me as well as everyone else ordering as if we were long-time regulars. I was also pleased to see some familiar beverages that are pretty much the norm at Mexican establishments. 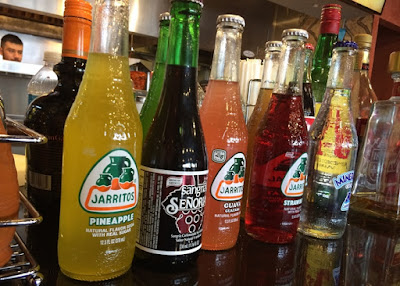 Interestingly, my menu choices warrant a second visit to Hass back more than anything. Hass' menu isn't the as extensive as the Mexican eateries I had mentioned, and in the end I selected menu items I realized didn't highlight that wood fired grill aspect (like pretty much any menu item that had carne asada.) With that said, I was pretty pleased by what I got.

Hass' fish tacos are done pretty well for a place in Ohio (more on that later), with plenty of fish and toppings and a lightly spicy crema, with a bonus nod for the double tortilla construction. 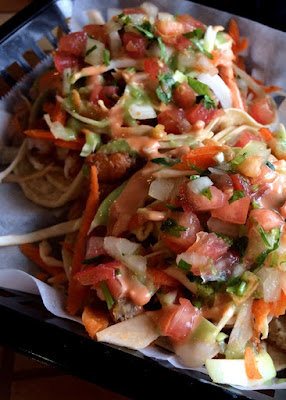 Meanwhile, their Taco Verde, listed as a premium item (along with things like a Taco Carmelo (carne asada on an lightly-toasted 8" tortilla and green salsa) and the Papa Caliente (wood-grilled potatoes topped with that same carne asada, bacon, mushrooms, onions and salsa)), is not terribly picturesque but uniquely tasty, mixing grilled napoles (cactus) with potatoes, onions and melted cheese on a single tortilla.

A little closer in toward the city's core, Columbus' Short North is seemingly becoming the "taco combined with craft beer/craft cocktail" corridor, as another newcomer in Mississippi-based Babalu Tacos is set to join the scene.  Of course, there were those outsiders who saw the area as fertile ground beforehand, such as the rather popular Cincinnati-based Bakersfield. 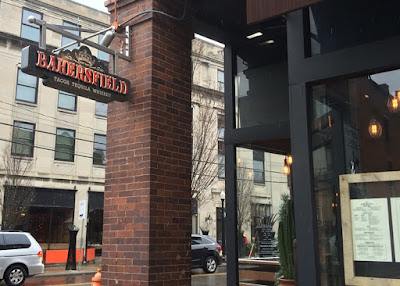 In Bakersfield's case, my intrigue came in the prodigious younger crowds I've noticed whenever I've walked by, as well as how it compared to a fellow "gringo" Short North taco place I've reviewed in the past in Condado.  Could a relative old-timer who thinks more of oil fields and Buck Owens when he hears the word "Bakersfield" find some tasty eats in this joint? 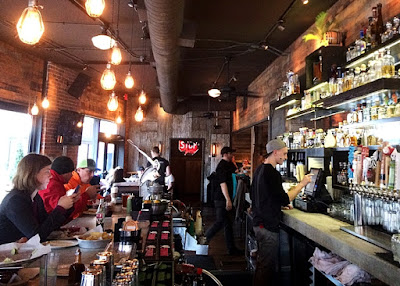 I bellied up right to the bar on what was a bit of a fortunate day - busy but not to the point where staff members feel rushed to explain things to you.  The interior did its best to evoke a Western-style saloon, with plenty of worn wood touches doing its best to mask of modern contrivances like ducts and electrical wires, as well as the brick walls of the space itself, with a somewhat laid back West Coast vibe. 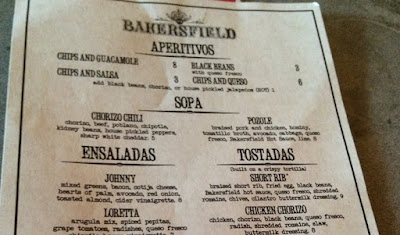 Unlike Condado, Bakersfield offers a focused menu with typical constructs (tacos, tostadas, etc.) constructed of both traditional and more gourmet-styled ingredients, including fried eggs, shredded romaine, and variations on short rib and marinated pork. Like my experience at Hass, I ended up ordering items that had no land-based-animal proteins within them.

When I bit into Bakersfield's Fish Taco, I really began to realize I'm going to have to adjust my expectations after my trip to San Diego.  It was okay, but it fell short of Hass' rendition I had a couple weeks prior (the single housemade tortilla base did not help either in keeping it all together.) Much better was the Papas Tostada, which threw potatoes and a mess of other items like black beans, poblano, queso fresco, guacamole and buttermilk dressing onto a crispy tortilla for a pleasing blend of taste and texture profiles. 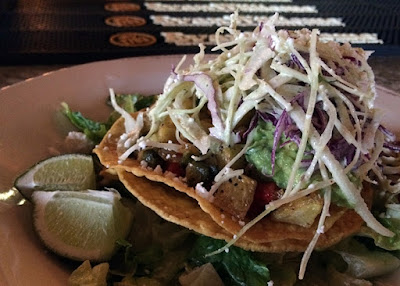 The item that convinced me Bakersfield was worth another visit, crowds or not, may be their most unique item. Corn truffles make up the center of their Huitlacoche; combined with roasted poblano, cotija cheese, corn, cilantro and onions, it was simply quite delicious, and something I'd almost certainly order again on a return visit. 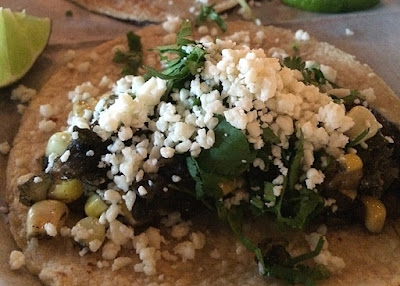 ,
Yes, Bakersfield has craft beer, including a fair number of Ohio-based breweries, and I opted an one of Platform's offerings during my first visit.  True to their advertising, however, tequila and whiskey are prominently displayed at the bar (Bakersfield touts over 100 selections in those two categories of spirits) and will probably be my line of pursuit the next go around.