Doubling Down on Graceland: Pat & Gracie's

As you may have noticed in my blog posts, the history behind an eatery is something I always try to include to some degree or another.  In some ways, that has been spurred on with my increasing interest in my current hometown's history, which has increasingly become an unofficial pursuit of mine since I've moved here.

One of the more interesting stories for me relates to a retail center I have found myself passing early and during my city travels. The Graceland Shopping Center, located close to where Columbus and the southern border of Worthington meet, has its origins in one of the most colorful and famous people from the Prohibition days in Pat Murnan.

As the story goes, Murnan, a railroad worker with a flamboyant personality, ended up winning ownership of a local casino club after one exceedingly lucky night. From there, he parlayed that fling with Lady Luck to emerge as Columbus' unofficial guru of gambling during the Prohibition era.

Murnan created a stir when he started a romance with one Grace Backenstoe, who earned her keep near Murnan's main operation as the madam of a downtown brothel.  The two clicked so quite well, they moved up to settle in at Murnan's 700-acre horse farm in the Clintonville area. Perhaps unsurprisingly, Murnan dubbed their homestead Graceland in honor of his gal shortly thereafter.

As it turned out, both Pat and Grace Murnan would not see the year 1940, with Pat passing away in 1937 and Grace two years later. In 1952, local developer Don Casto announced that a retail center would be built on the land that the Murnans had called home.


While Murnan's operation was technically considered illicit, his operation's mere existence kept more notorious individuals (namely, Al Capone) from gaining a foothold in the city, and Murnan's generosity with people and local charities earned him more or less a pass with the locals. Still, Murnan tried to keep his operations as inconspicuous as possible, posting a lookout at his club and fronting his operation with a cab company.

In a similar vein, the restaurant quotient at Graceland since I moved here seemed similarly (and oddly) inconspicuous, both in the low number of restaurants and the generally low culinary intrigue factor. Interestingly, that factor has multiplied quite a bit in the last year, with a couple of chain restaurants departing and replaced by promising and/or proven newcomers, including one that directly evokes the history of the area. 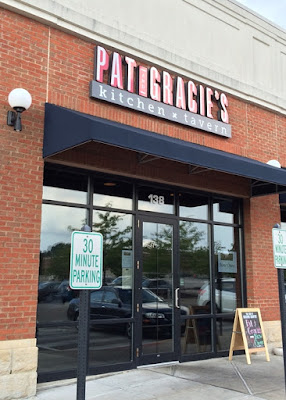 Pat & Gracie's, which was opened in last spring by a trio of restaurant veterans (Craig Chapman, Matt Rootes, and Tony Wildman), directly evokes the history of the area in the eatery's name, even dedicating a section of their website to the story.  Ever since its opening in spring of last year, the eatery has proven to be a popular spot with the locals, with good-size crowds on the days we've visited. However, service has proven to be spot on here - we've never had to wait for a table for all that long, and we have never felt rushed to leave our table when finally seated. 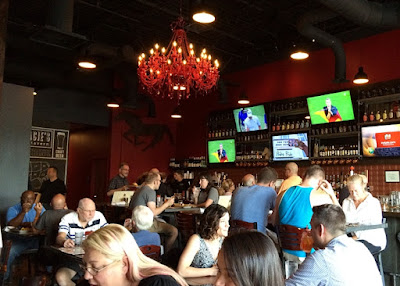 The strip mall exterior provides no clue to the pleasant mish-mash of industrial and rustic touches you'll find inside this space. A kitschy chandelier and a painted horse on the walls evoke a nod to the eatery's namesake and the loud, lavish stylings of Murnan himself. 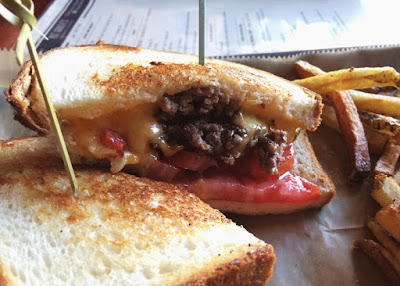 The main attraction of Pat & Gracie's from-scratch menu are the hamburgers, which have turned out to be our go to as well. Every rendition we have tried so far, from the Pimento Cheese Melt to the Chimi Burger to a Build-Your-Own option (with blue cheese, one of my spouse's favorite things on a burger, as an option), has been a satisfying creation, especially when paired with their nicely charred hand-cut fries.

If you're not a burger fan, Pat & Gracie's has other non-beef sandwiches available like this Salmon BLT, which mixes in Sriracha mayo and carmelized onions for a fairly unique but fulfilling construct. A trio of Big Bowl salads are also an option, if you feel the need to veer a little more to the healthy. 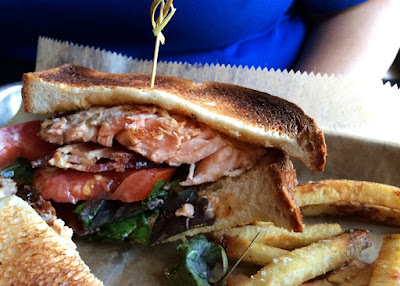 Appetizer plates are also a viable option, from what we have heard (we can give a thumbs up to their Fried Bread and Butter Pickles) as well as a daily offering of various Homemade Special platters, which are posted prominently on the wall.  And no matter what food item you order, Pat & Gracie's offers a decent selection of craft beer (including several locals) as well as wines. 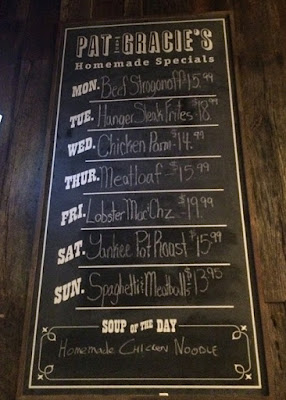 While this new eatery took over the former location of the wing-oriented chain Buffalo Wild Wings, this eatery is actually the perfect counterpoint to another chain which has flown the Graceland coop recently in Applebee's. To subtly play on this departed chain's slogan, I believe Pat & Gracie's is the type of locally-oriented place where you can eat good WITH the neighborhood, and not simply in it.

And almost any neighborhood is better off with this type of place succeeding - that you can bet on.