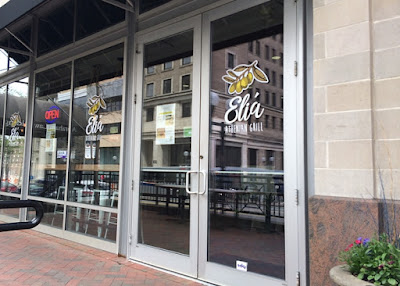 In the early days of my blog, I did a small little series about the sandwich options around the Ohio Statehouse in Downtown Columbus. Unsurprisingly, the sandwich is a pretty popular lunch vehicle here, as major chains like Subway and Potbelly Deli battle locally established eateries to attract the numerous hungry workers employed in the area.

Perhaps as a testament to that steady demand, many of these places are still plying their trade in some form or another, though in some cases with a twist. For example, social-mission based Freshbox seems to do all its business these days by catering. Meanwhile, Milo's Capital Cafe, located deep within the Ohio Statehouse, has refreshed its concept into the farm-to-table focused Graze.

One thing that this very distinct subset of eateries has been a bit short in is a touch of a worldly element. AJ's Cafe had been a favorite of mine with its grab-and-go creations with a touch of Indian flair, but their departure in September last year left the excellent Peruvian sandwich offerings of Si Señor (which has since expanded into Grandview) essentially all alone in this world.  That's why the arrival of Elia Athenian Grill and its Greek-oriented quick grab options perked my interest initially. 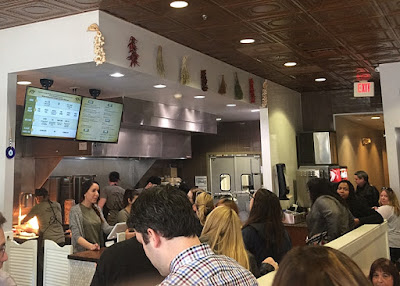 The space where Elia resides has not had the best of luck - eateries like Burgers, Dogs and Fries, Grill & Grill, and Burger Shack had their shot at holding down this prime downtown spot and were unsuccessful. However, Elia seems to have that mojo to break that trend, based on the crowds I have seen during my visits.  It's also a nice space to hang out in, with visually pleasing visual touches like a tin press style roof, subway tiles, tastefully decked out shelves, and a communal seating island. 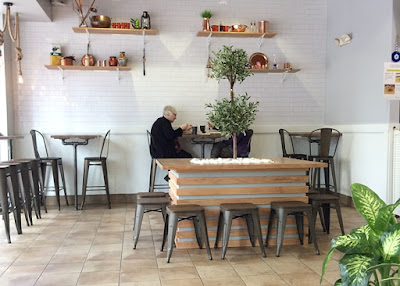 Owner Ilias Zervas stated in a Columbus Underground article that he was tired of the "fake" gyros most Americans have been exposed to, and it was nice to see that Zervas was sticking to the plan with servers carving out slices of pork and chicken stacked on spits from behind the counter. 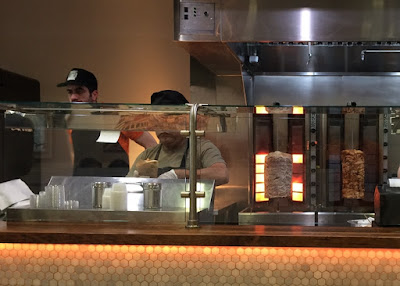 Two standard options are available: a plate is essentially a deconstructed wrap, with sliced pitas and your choice of proteins (including souvlaki) served with various veggies. For me, the pita version is the time-saving favorite with me, combining fries within the wrap for an all encompassing lunch, with the pork version (with the spicy feta sauce) being my favorite so far. If you feel you need this wrapped in a tortilla instead, Elia offers that option as well. 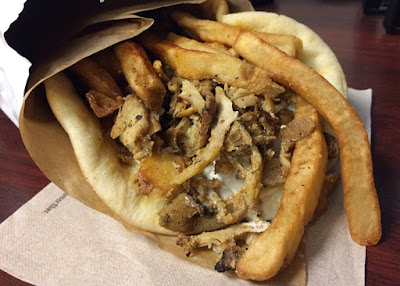 A variety of salads are also on Elia's menu. Served with a side of sliced pitas, the large version makes for a pretty filling lunch. You can add a protein (like I did the first time) but I ended up feeling like I needed a siesta during the afternoon due to my full belly. Other sides such as soups, baklava and pita chips are also available to the visiting diner. 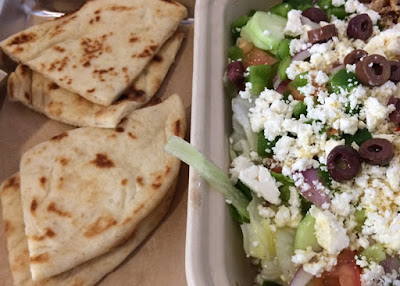 In a new development, downtown workers need only walk just a couple doors north for breakfast food should the Tim Horton's at Broad and High prove too stuffed to the rafters, as it is often. Elia's just announced the launch of its breakfast menu, which includes a pita wrap that adds eggs to your typical gyro ingredients, a souvlaki and eggs platter, as well as Loukoumades, touted as authentic Greek street food donuts.

While sandwiches in general aren't "oh my I've gotta' travel 300 miles for THAT" creations, Elia has shown in its short time that its quick and tasty fare can more than handle itself against similar eateries downtown. I have a feeling that will continue for awhile even as new competitors arrive on the scene, such as the newly opened Stack'd on Third Street as well as Cravings Cafe, which (finally) seems to be in the homestretch of its relocation into the much-longer-lasting-than-hoped-for renovation of the old Saigon Palace space on Front Street.