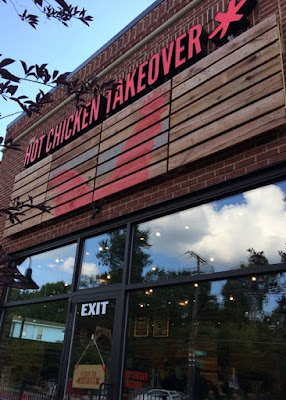 With the recent arrival of National Fried Chicken Day on July 6, I figured it was more than appropriate to touch on the subject with a return to an old favorite. I have blogged about Hot Chicken Takeover (HCT) in the past (with this blogpost), a definite sign I've been at this blogging thing a lot longer than many.

But now as in any future return posts, I think the mission behind this now mini-chain of restaurants will always be the prime story when it comes to this Columbus-based eatery. Founder Joe DeLoss's commitment to hiring employees with significant social challenges has been a core staple and strength of its business since it started as a weekly pop-up restaurant in the Olde Towne East neighborhood in 2014. It is a model that, as noted in this recent Columbus CEO article, "has the potential to revolutionize the way restaurants and other entry-level employers approach hiring and retention."

With that said, this concept wouldn't have nearly the legs it has shown if this eatery weren't putting out a compelling culinary product. In this case, HCT's legs has actually come from legs...chicken legs, that is, as well as wings, breasts, and thighs done Nashville Hot Chicken style. Columbus diners have responded tremendously, so much so that HCT will have three locations going in the metro area by the time this fall has firmly settled back into the metro.

Another intriguing HCT announcement was made in May, which stated that the eatery's hottest spice chicken level, the so-called "holy" level, had just been amped up.  Suffice it to say, my spicehead self had to give this newly boosted heat-bringer a try, and it allowed me a chance to visit the newly opened Clintonville location, which opened up in June. 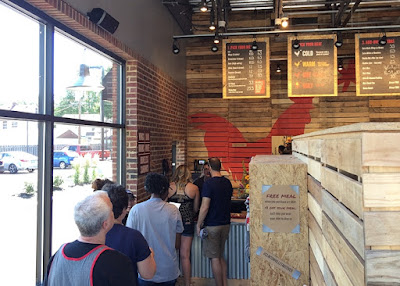 HCT's new location brings familiar building elements from their original Short North brick-and-mortar into this modern, strip-mall space: bench-style seating, free tea (both sweet and unsweetened), and the familiar HCT logo on prominent display. Also similar to the Short North location, those who put in their order in house can expect a wait but not an inordinate one.

One nice advantage the Clintonville location does sport is the call-ahead window, which acts essentially like the traditional drive-thru in that you don't have to leave your car, provided you call in your order ahead of time.

The menu pretty much is the same that I remembered from the last visit, and I figured I'd get the full effect of the holy spice level with the smaller wing-style pieces versus the larger cuts.  Thus, I got the 4 drumsticks meal, which comes with the mac and cheese and slaw.  Again, similar to their Short North location, the tray was delivered to my seat by one of the HCT staff members. 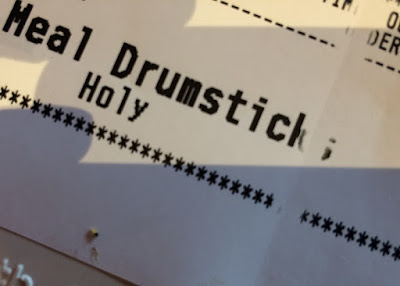 Yep, the label looked right.  And sure enough, when I lifted the tray, a cascade of cayenne clobbered my sinus cavities, almost causing me to sneeze.  The chicken sported a much mahogany color than previous renditions of "holy" level chicken from what I could remember. 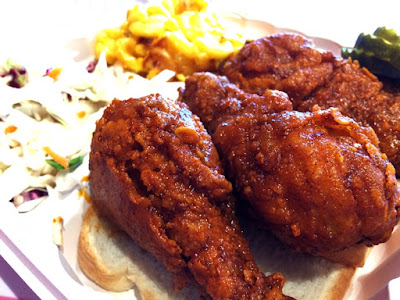 I must digress a bit and talk about the sides, which have been are remain quite excellent. I like my slaw crisp and tangy, and HCT's rendition delivers on both aspects.  The Mac and Cheese is also another dense and cheesy winner; I realized that its a little bit of an underrated buffer for the capsaicin my spouse and I typically order up on our visits.

Now to the chicken: unlike the previous iteration of "holy", HCT's new rendition smacks you pretty much right inside the mouth from the get go with heat, and by your third bite, it was plain to see HCT was true to its word.  With that said, the heat didn't build up as much over time as it did with the only other rendition I've had experience with in the "XXXHot" rendition from Nashville's Prince's Hot Chicken Shack.

That particular heat level might actually lie with the eatery's "Double Holy", which is not advertised but can be ordered if you simply ask. I definitely plan to ask for that on my next visit.

And, as sacrilegious as this might sound (I mean, what, leftovers?!) HCT's "Holy"-level chicken makes for a great cold (as in refrigerator cold) lunch leftovers the next day - just saying.