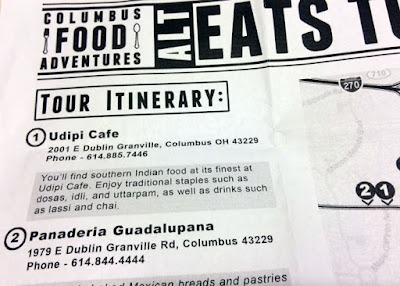 Bethia herself was the host on this Alt Eats Tour, which gives tour-goers an introduction to the a selection of ethnic eats in the Columbus area. While we were familiar with three of the ethnic cuisines featured, we were thrilled when we realized that all the spots covered on the tour would be eateries that we had not previously visited.

The samples from those three familiar-cuisine eateries made us want to go back for further exploration. Udipi Cafe's Southern Indian menu is vegetarian, but as we learned with the similar Dosa Corner, you really don't miss the meat. I thought about pacing myself as, from our past experiences, Columbus Food Adventures' tours leave you awfully full. However, Udipi's towering samosa and a dosa samples were too delicious not to finish. As with all our stops this night, Woolf did a great job of explaining both the dishes we were sampling as well as the history behind each eatery on the tour.

Next, we dropped by Panaderia Guadalupana, which specializes in freshly-made Mexican pastries and baked goods. I think there's nothing quite like a newly fried-up churro, but this bakery's version sported a special surprise with a custard-filled center. Finally, we may have just discovered the best Bahn Mi sandwich in the area with our visit to Mi Li. The menu may be limited, but the owner's homemade pate and meticulous assembly put their version of this Vietnamese sandwich staple over any we've tried in Columbus so far. 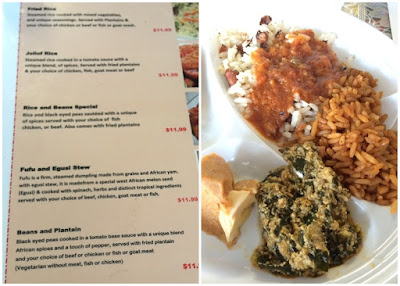 The two eateries we had greatest anticipation for were the African restaurants on the tour, and we were not disappointed in the least. Nigerian was the order of the day at Intercontinental, and we were treated to a sampler plate of intriguing taste profiles and food textures such as Fufu (a steamed dumpling made with yam and grains), Egusi Stew (featuring a common West African melon seed) and the staple Jollof Rice. Many of these dishes came with a spicy kick built in, something my spouse and I definitely do not object to. 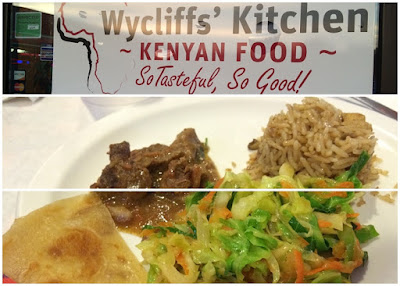 The final stop found us diving into Kenyan cuisine for the first time at Wycliff's Kitchen. Owner Wycliff Nduati greeted us tour-goers personally as he gave a rundown on his story and Kenyan food in general. Unlike their West African counterparts, we learned that Kenyan and other East African food tends to be flavorful but not spicy - if you want a little kick to your dish, they'll serve you a spicy condiment on the side. On this visit, we went sans spicy augmentation with our sampler plate - the Karanga Ng’ombe, a beef stew, reminded me a little bit of Filipino Menudo, while the tastiness of the Kabeji far surpassed the simplicity of its composition (cabbage with onions.) 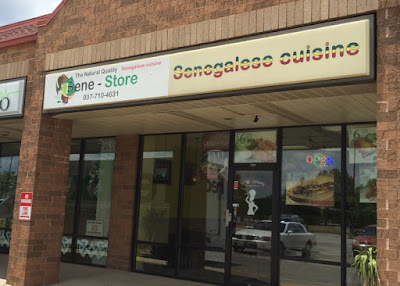 Not too long after the tour, I found myself in Western Ohio in Sidney, the county seat of Shelby County. My spouse and I had enjoyed a nostalgic visit last year to the last of small town hamburger chain Clancy's, but on this visit I was craving for something a bit more than a burger and fries. The part of town I pulled into (State Route 47 at Interstate 75) didn't seem to promising for anything but fast food versions of that particular combo as well.

Thankfully, a little research uncovered what seemed to be an anomaly in a nearby strip mall - a lonely bastion of Senegalese cuisine in the form of Sene Store. 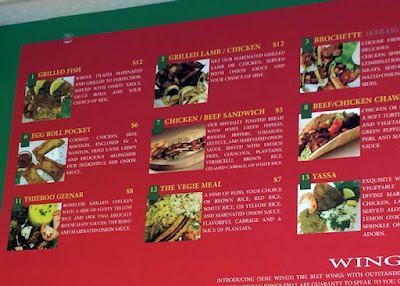 There's really not much to the interior to speak of - a few tables and chairs, a refrigerator filled with pop and other assorted beverages (homemade bottles of Bissap and Bouye juices were spotted, along with bottles and cans from Vimto and Chabaa), and a functional front counter area. By the cash register, plastic bags of grab-and-go hush puppies stood at the ready, while the doorway leading to the kitchen in back had shelves filled with a random assortment of pre-packaged food products and beverages.

At first glance, Sene Store's menu seemed to cater to the local populace, offering familiar packaging in the form of burgers, quesadillas, chicken wings and sandwiches, but a closer look saw a variety of what I gathered to be Senegalese touches with various sauces, ingredient combos, and some unfamiliar dish names usch as Yassa (white rice with tilapia, lamb or chicken, plus veggies and a tangy lemon onion sauce) and Fataya (meat pies served with an ordinary brown sauce or a marinated red sauce.) 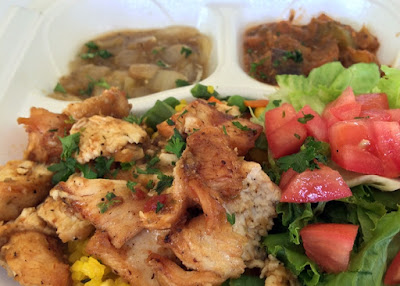 As I had some time on my hands, I decided to go with a more traditional-sounding dish in the Thieboo Geenar, boneless grilled chicken served with yellow rice and two different sauces (a marinated onion and what the eatery called a Bolo sauce) and veggies. Here the sauces made the otherwise pleasantly-flavored chicken and rice jump - the marinated onion tasted as you might think, while the Bolo sauce was much more rich and savory rather than spicy. It had a texture more like a thick tomato-based stew than a traditional sauce (Google wasn't much help in identifying what the actual ingredients might be.) 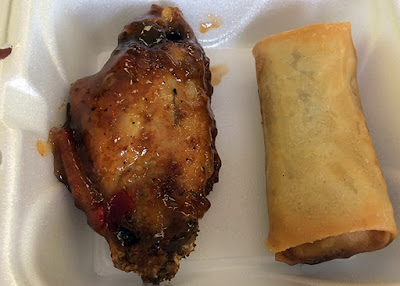 I had intended an order of Aloco (perfectly fried up plantains) as my finishing side, but the owner also surprised me in the middle of my meal with a sample of their a very tasty Sweet Chili wing as well as the Neme, a Senegalese egg roll. Distinguishing this preparation from others I've tried was inclusion of noodles in the filling, adding in an unexpected textural aspect to the exterior crunch and diced beef and chicken within. I also detected a faint sour tang that actually provided a pleasant flavor profile to the mix.

The store owner, an incredibly hospitable fellow, laughed when I asked him how he ended up in Sidney. Stating that this was the most common question people ask him, he responded that he had been working for a relative's restaurant in the Cincinnati area but wanted to start his own venture. Eventually, he came to the conclusion that Sidney offered the best combination of potential customer base and minimal business expenses.

So far, it seems to have worked out, as they are still chugging along after opening in early 2015. On the day of my visit, there were plenty of people who were willing to wait a few minutes (this is no fast food joint by any means) to have Sene Store freshly cook up their favorites. If you are driving through the area and have some time to sample something unique in an unexpected place, Sene Store is well worth the venture.