From his ascent from the bowels of the theater on the opening number "Tacky" (his play on Pharrell Williams' smash "Happy") up to the stage via the main floor, Yankovic showed his intent to give his clearing adoring audience some personal interaction. This was taken to hilarious extremes with his Beck/Prince-styled sexy-song send up "Wanna B Ur Lovr", as Yankovic donned a ridiculous, bright orange-red flame-print suit and delivered song lines such as "My love is like diarrhea/I can't hold it in" to a number of a host of mostly laughing/slightly embarrassed audience members on the main floor.

Yankovic has stated in numerous interviews that the roughly two-hour-long shows on his current tour were meant to pack in as much entertainment as possible for concert goers. The previously mentioned video segments, as entertaining as they were, clearly had another purpose in allowing time for the numerous costume changes. We personally had expected it would be Yankovic alone would be doing this, but we were nicely surprised to see his long-time backing band members (who provided solid musical backing throughout) in on the costume changes as well.

I imagine for most people, your current enthusiasm for a particular Yankovic parody may lie in your current enthusiasm for the original song itself.  This held true for me: performances of "Fat" (his take on Michael Jackson's "Bad") and "Perform This Way" (Lady Gaga's "Born This Way") weren't quite as engaging as "Foil" (Lorde's "Royals") and "Dare to be Stupid" (his stylistic take on Akron, Ohio's favorite sons DEVO.)  However, Yankovic threw a pleasant curveball into the mix by melding a selection of his parodies to other song melodies in an unplugged setting, including a very engaging version of "Eat It" done to Derek and the Dominos' "Layla".

With his accordion, Yankovic can put a polka sound to just about any tune you can think of, and his latest collage of songs "Now That's What I Call Polka!" ranged from Miley Cyrus' "Wrecking Ball" to Psy's "Gangnam Style" and LMFAO's "I'm Sexy and I Know It." The middle of his set also saw Yankovic and his band put together their own collection of fan favorites together, including "Party in the CIA (another Cyrus reference for her "Party in the U.S.A."), the Queen-inspired "Another One Rides The Bus", and "Gump", his take on the Presidents of the United States of America's 1995 hit "Lump."

If the crowd wasn't all behind Yankovic after all that, the closing threesome of "White and Nerdy", "Word Crimes" and "Amish Paradise" (parodies of big hits by Chamillionaire, Robin Thicke, and Coolio) had the crowd more than ready for the encore, which Yankovic and his band mates happily provided. After a song referring to a 1999 mock interview Yankovic had with R.E.M.'s Michael Stipe ("We All Have Cellphones" - indeed, most everyone at the Palace pulled out their mobile devices), the show closed with Yankovic's traditional Star Wars-themed couplet of "The Saga Begins" and "Yoda", complete with characters, costumes and props from this ubiquitous part of pop culture. 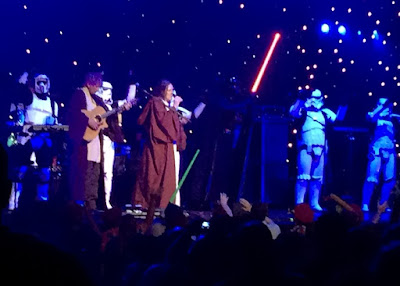 The audience was full on into the moment: arms were swaying, voices were singing and faces were smiling as Yankovic and his band closed out the proceedings. There really wasn't anything mandatory about the fun people were having on this night - it was all heartfelt and natural, a perfect way to spend a midweek night in Ohio's capital city.

Tour information and artist information can be found at the links below:
Mandatory Fun Tour
"Weird Al" Yankovic Artist Page
Posted by Joe