Despite, or perhaps, helped out because of this development, the crowds flocked to what was the then nearly 3,100-seat baroque-styled grand building, designed by famed Scottish architect Thomas W. Lamb, to catch all manner of entertainment from movies to vaudeville performances to music concerts and beyond. People were amazed by the architecture and the design touches, but perhaps the the true centerpiece of this building lay in what became known as the "Mighty Morton."

Built by the famed Robert Morton company of Van Nuys, CA (a company with its own fascinating history), the "Mighty Morton" pipe organ was installed specifically for the theatre. Costing a cool $21,000 to build, the organ pumped out music on a regular basis for the theater's first dozen years of existence.  Perhaps reflecting the building's decline as an attraction, accelerated due to the post-World War II flight to the suburbs by city residents, the organ was played only intermittently at theater events from 1940 up until 1969, when the building was due for a date with the wrecking ball. 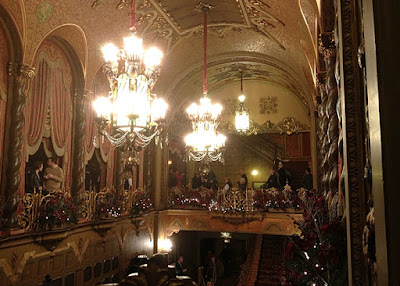 Happily for preservationists and folks with an appreciation for the vintage, an effort to save the building (spearheaded by the Columbus Association for the Performing Arts (CAPA); CAPA still runs the Ohio Theatre and several other historic downtown Columbus theaters) from the dustbin of history was successful, and the Ohio Theatre and its home standing organ continue functioning as well-beloved local treasures to this day.

As noted by the website ohiomortonorgan.com, a 1987 restoration effort updated the wiring for the organ and upgraded the specs of this grand instrument to its current four manuals, 34 ranks, and 324 stops, and it remains one of the very few theater pipe organs to never leave its original home. It was this setup I first got to experience in person in 2014, during intermission breaks in the theater's showing of Monty Python's 1971 movie And Now For Something Completely Different. Seeing resident organist Clark Wilson play the "Mighty Morton" (especially when he broke out music all Python fans would be familiar with such as John Phillip Sousa's "The Liberty Bell") was truly a treat.

It was in this very building where William "Bill" Dalton plunked the keys as the first official resident organist (Loew's officials sent one of their most accomplished organists in Henry B. Murtagh to handle the first few opening weeks.) Prior to his stint at the Loew's, Dalton played organ at other Columbus venues such as the old Majestic and Grand Theatre, and he proved to be very popular with
Loew's customers during his residency, which included a role as associate conductor of the orchestra.

As noted in the obituary/article from The Columbus Dispatch newspaper dated August 12, 1977, Dalton had moved on from Columbus to play at the Byrd Theatre in his hometown of Richmond, Virginia, in 1933 (he was succeeded at the Ohio by Roger Garrett shortly afterward.) After various radio and television appearances, including Radio City Music Hall, Dalton settled in Hartford, Connecticut, mixing performances and teaching organ.

Both Dalton and Garrett returned to play benefit concerts at the theater as part of the efforts to save the building, and Dalton himself was set to appear for the now Ohio Theatre's 50th Jubilee Celebration in 1978 prior to his death in the summer of 1977. 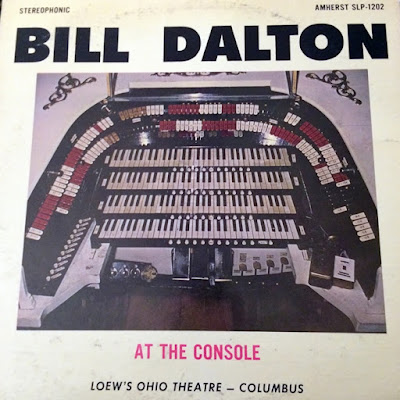 As you may have figured out, this Vinyl COHvers segment features Bill Dalton plunking the organ keys on the album "Bill Dalton At The Console" (Amherst SLP-1202). The liner notes state the recording is from May 1968, where those who had restored the "Mighty Morton" organ persuaded Dalton to return for a special concert. The notes note that Dalton's performance was well-received, noting that the "enthusiastic audience of theater organ lovers showed their enthusiasm with three ovations."

The four songs chosen for this post cover the gamut from the traditional ("Battle Hymn of the Republic", which dates back to the 1800s) to prime compositions of Dalton's heyday ("In The Mood", made popular by the Glenn Miller Orchestra, and a medley of Richard Rodgers musical tunes) to a little classical noodling "Scratch My Bach", made famous by Peter Nero in 1961.)

For more details on the Ohio Theatre and its "Mighty Morton" organ, I suggest checking out these fine online resources: